Despite the overwhelmingly positive Rotten Tomatoes score it appears that this movie is on course to receive, it goes without saying that this one is dividing critics like crazy. Ready Player One is based on the popular book written by Ernest Cline, and some who read and enjoyed the original novel were, to say the very least, apprehensive about what would happen with a full movie adaptation. This is a movie that’s received extensive hype and marketing over the past months – it’s been hotly awaited by many – and while it doesn’t disappoint on one or two levels, it remains remarkably unimpressive on a number of others. Sadly, while this is a movie that does an awful lot – to an absolutely mind-boggling extent – you do leave it feeling somewhat hollow – or is that just me?

In a distant future where the world is hooked on virtual reality, having been co-developed by 80s culture-loving James Halliday (Rylance), Wade Watts (Sheridan) is a teenager who appears fixated on solving the late developer’s riddle – he’s left three virtual keys in an expansive virtual world known as the Oasis, and those who find the three keys will then get access to full ownership of the virtual landscape. The Oasis is an immense world full of player avatars, games, otherworldly experiences – you name it – as well as an incredible amount of Easter eggs and cameos thrown in for good measure. However – as Watts, aka Perzival, finds himself a crew to search for the keys with, a sinister corporation known as IOI starts to mount a campaign to seize ownership of the Oasis for themselves – expanding their already frightening empire and use of VR technology. 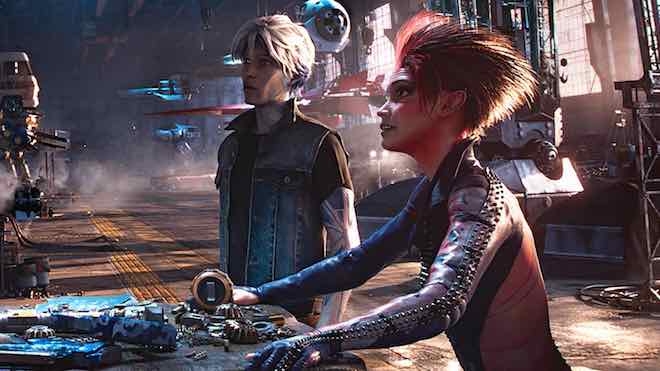 Let’s focus on the positives first. Ready Player One is amazing to look at – I would certainly recommend viewing in 3D or IMAX where possible – as the first act alone is a trip in itself that cannot be paralleled. There’s been such effort put into the craft and the detail of the worlds that this movie surrounds and it absolutely shows. This is a movie that you could watch again and again for the sheer visual aspects alone – it really does create a landscape that you really want to get into – it would have been great to see characters simply dive into more of the experiences that were on offer to them, just to get a better look at the Oasis – this could have worked over several movies – but beyond the expansive world that Cline’s novel set up for us, the movie really does fall flat when the plot starts to seep in.

Ready Player One suffers thanks to two major issues, the first one being that the main plot – and the characters – killed my passion for what was going on stone dead around the halfway mark. The creativity – the expansive worlds and the sheer visual ride – was immense for the first act and the first part of the second act – but the minute that these characters start banding together, and the evil corporate power comes into focus, things get – and I hate to say this – incredibly bland. For a movie that is so intensely focused on crafting such beautiful inspiring worlds and a society which actually seems to be benefiting from advancing technology (for once – save the torture that IOI is putting people through) – it really does fall back on the most well-trodden tropes and ideas going. The movie – of course – moves into true Spielbergian territory midway through, and while Spielberg is a world-class director, it feels as if he really switched to auto-pilot once the first key is discovered. This is the exact point I rather lost my passion for the movie – it remains visually entertaining, but the first act is a tour de force which is so let down by the remaining acts.

This, sadly, isn’t the only point that sticks in my craw as a viewer. I am personally of the generation which will be most enchanted by cameos and Easter eggs relating to several popular franchises – games, movies, and more besides – and while cameos are all well and good (Wreck-It Ralph did this marvellously well, and Who Framed Roger Rabbit really set the benchmark that hasn’t been bettered) – they need to be offered with heart, and with something new to say. Sure – we get Street Fighter characters and Hello Kitty and the Teenage Mutant Ninja Turtles wandering around here and there – but there is such a self-celebratory focus on offering up these pop culture icons as bait for the audience that it all feels rather hollow.

It is the equivalent of being asked “Hey, remember this?” and then moving on, over and over and over again. It’s hard for some of us not to get excited at some of the characters and moments that pop up – but that’s because we care. Ready Player One has this weird, constant insistence on offering you bland nods to nostalgia so often that it feels almost irritating in places. The presence of 80s culture – the soundtrack, and more besides – would be great, if it wasn’t hammered in with such a metaphorical sledgehammer. There’s not really much of an explanation as to why the 80s are so relevant in the 2040s – having not read the book, I’d hope the source novel goes into this a little deeper.

This all seems like a lot of criticism for a movie I’ve rated three stars out of five – but it’s a movie that deserved at least four and a half, had it not fallen so short on the story and had it not offered so many hollow, Facebook-esque ‘only 80s kids remember’ moments. The visuals are immense. The concept is adeptly handled for the most part, the acting is great – and I really want to visit this world for myself (sans the torture chambers, of course) – but I came out of Ready Player One feeling underwhelmed – and I have a feeling many other Millennials, for the most part, will too.

Game Review: MotoGP 19 gives you lots to chew on

Kay Kay Menon is all set with his new line up for this Monsoon, Penalty!

Giorgia Andriani sizzles in her most recent photoshoot!

Italian beauty Giorgia Andriani is a pool of talent and good looks. Not only is Giorgia a fabulous dancer and actor, she is also a..

Every notable HBO original TV show, ranked from worst to best by critics