This is an odd one. Is it complete sacrilege for me to grade what is, by all accounts, a big, daft, action movie about giant animals literally going ape – in line with what many are calling another sublime effort from Steven Spielberg in Ready Player One? I don’t think so – I really don’t – and I’ll go into why later in this review. For now, however, I think it’s important to understand quite how odd this movie is – and how it’s come so close to breaking a curse that’s been in play for some years now.

Rampage is based on a classic arcade game from the dark ages of gaming – at least in comparison with the way the medium has evolved over the years – and it largely surrounded three monsters attacking various cities around the world, wreaking havoc and destruction as they went. It was rather a pioneering title – you essentially played as the villain – the monster of the piece – getting points for destroying skyscrapers and eating civilians. It’s an interesting title which is still fun to play today, but – who decided to option it for a big Hollywood movie? In the same vein that an Angry Birds movie sounded odd two years ago, this is one which is quite a head-scratcher at least in terms of reasons for adaptation. 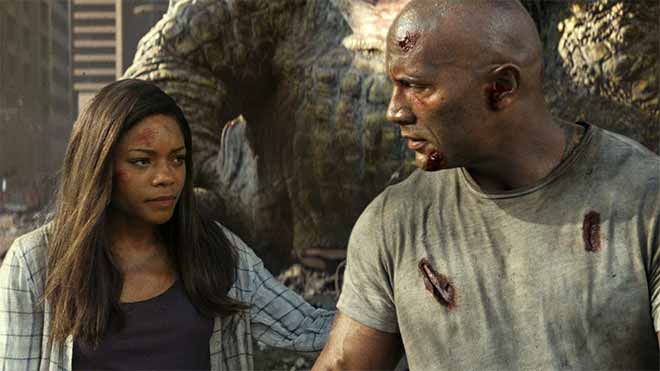 In this adaptation of the game (which in itself had a story about three people mutating into giant freaks) – Dwayne Johnson plays a scientist who finds himself roped into a nightmare situation where various animals, including his own favourite (an albino ape called George) are being exposed to a pathogen which causes them to mutate into enormous, destructive killing machines. What transpires is a battle against time to try and find a cure and to stop the monsters – before Chicago is brought completely to its knees.

Yes – it’s a completely off-the-wall plot – and one which is just so bonkers, it might actually be entertaining. It’s a premise which is a nice little twist on monster movies – one that’s actually kind of nightmarish – and it’s carried off in the big, bolshy, blustering manner that you’re hoping it would. Rampage is a movie which knows it’s a complete oddball, and as such, it does have a lot of fun – Johnson plays it up completely straight as the main action man, and, while it would have been bizarre to think of Johnson and Harris starring together in an action movie based on an ancient videogame a few years ago, it feels kind of right in today’s cinematic climate. Movies are beginning to have more and more fun, and are starting to push more envelopes. I, personally, am beginning to get more and more surprised by films – and while this one certainly didn’t surprise me in terms of what it ultimately set out to try and do, it did provide a more than palatable day out at the cinema.

Here’s the clincher – it’s surprisingly violent. This is not your average action or disaster movie which leaves the body count to the imagination. You SEE the death along with the destruction, and it’s often amazingly unexpected. This is a film which really wants to go all out on being completely over-the-top bonkers and relishes every moment – and I think that’s something to be proud of. Sure – it’ll never win anything for what it’s done, but it’ll surely cement itself for years gone by in the cult cinema section. This is the sort of thing Mystery Science Theater 3000 will do riffs on in years to come – it’s completely and utterly self-aware, though not to the extent that it’s a parody or a pastiche. It’s just serious enough about itself for it to be your run-of-the-mill action plodder – but with just enough bite and passion behind it to really ramp up the cheese factor. Plus – Dwayne Johnson is involved – and that, for the most part recently, has been a guaranteed ticket to box office success (you only have to see how well Jumanji 2 has done for that to sink in).

All things considered – is Rampage worth seeing? It’s certainly something – if you’re in the mood to see something completely and utterly bananas and aren’t bothered about how a movie makes you feel certain things or think a certain way, you should absolutely see it. This was never going to be a movie that was going to challenge anything beyond the boundaries of taste – but, at present, it sits at 50% on Rotten Tomatoes, one of very few videogame movie adaptations to even straddle the line (Tomb Raider just about did it a few weeks back). Is Rampage a good movie? Probably not – but then, it knows that.