Horror movies still seem to be seeping out of every cinematic crevice right now, even when we’re neither at the start of the year nor even close to approaching Halloween – is this the ‘Get Out’ effect in play? Regardless – Annihilation arrives on the scene under the direction of Alex Garland, who is perhaps best known as the author of The Beach and as the screenwriter of 28 Days Later and Sunshine. Therefore, you may feel you have a handle on what to expect going in – let me tell you – I’m still not even sure what I’ve seen. This may well have been the first movie I’ve reviewed here with three question marks as opposed to three stars. However, I must avoid hyping this movie quite so much – as there are sadly plenty of areas in which I was left disappointed. 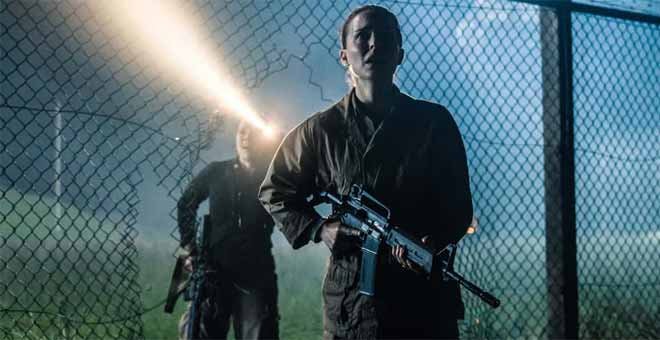 Released cinematically in the US and China and via Netflix everywhere else, Annihilation is a sci-fi movie / horror that focuses more on unnerving the audience and provoking thoughts than anything else. The story surrounds Portman electing to join an expedition into a strange, natural area of quarantine that has become known as ‘The Shimmer’. The Shimmer, tinted in rainbows, has swallowed up everyone that has dared to venture into it thus far – apart from Portman’s husband (Isaac), who returned home from military procedures there apparently internally rupturing and – perhaps even more strangely – a blank slate on the personality front. Just what has gone on here? What lurks in The Shimmer that could have caused such an occurrence? Mutation, otherworldly flora and all manner of scientific presumptions follow – it’s a fascinating concept.

This is my main issue with Annihilation – the concept is absolutely fascinating (and it is likely explored in more detail in Jeff VanderMeer’s original novel) – and while there is plenty of tension and build-up to suggest that we are about to witness something completely and utterly incomprehensible – there’s just not enough of it. Moments where characters describe what appear to be happening to the plant and animal life around them make for truly sinister moments that could have been handled with far greater payoff. The moments we do get are fairly messed up, let’s not beat around the bush – but compared to the hype that precedes it, we’re left feeling a little underwhelmed.

On the plenty of plus sides to take from this movie, it’s visually impressive – there’s no other movie in the last few years that has looked quite like Annihilation, and this is more to its credit and part of what piqued my interest in the first place. The sound design is incredible – unnerving, intrusive and discordant, this part of the production certainly helped with the final segment of the movie, which – just to prepare you – is as all-out bonkers as it gets, positively on par with some of The Lawnmower Man’s more visually assaulting scenes (though let’s face it, they seemed dated even at the time).

This is a movie that, sadly, also leaves plenty to the imagination. The ending – without spoiling matters – is fairly predictable and, unfortunately, hardly satisfying. One of the core threads running through the movie is the relationship between Portman and Isaac – and while there is a little chemistry there, we don’t really get behind them massively as the main focus of the movie. We care more about the freaky goings-on behind The Shimmer. While the screenplay attempts to land the emotional thumps that worked so well in Arrival (there are quite a few comparisons to be made here with that movie, though sadly not as positive), we’re left with an underlying journey I personally didn’t care too much about. Is it the morbid fascination in me – the sort that was so satisfied with movies such as John Carpenter’s The Thing – that overpowers everything else here? Perhaps. As such, just as the movie itself is overbearingly strange in its subject matter and in its execution, it is strange in the choices that have been made in adapting VanderMeer’s novel for the big screen. There are hints of Midnight Special in the removed storytelling – in the breezy way the movie moves along – and I truly think this is to its detriment.

While Annihilation is absolutely fascinating on paper – beyond its tired ending and its absolutely bizarre last act – its execution on film is underwhelming. I’m afraid I have to go against critical opinion on this one – was I expecting something relentless like The Thing? Emotionally and visually arresting like Arrival? Maybe – and this could just be my perception – but at the same time, many viewers liked me would have welcomed a different take on this concept with a slightly more maverick approach to execution. Annihilation could work better as an all-out frenzy – with touches of psychological posturing – rather than as a few touches of bizarre amongst a melodrama that ends with a fizzle. The movie scores middlingly for sound design and audacity alone – and while it’s slightly disappointing – it is perhaps still worth a look if you’re intrigued.