Yep, here we are again – if there’s anything that moviegoers seem to really lap up time and time again, it’s big, bustling dinosaur adventures – and why not? The Jurassic series has continued to wow audiences for over 20 years now and – despite a blip along the way with the rather lacklustre Jurassic Park III – things certainly seemed to have kept rather steady on both box office money and critical opinion fronts. Jurassic World – the prequel to Fallen Kingdom and the fourth in the franchise – completely blew the franchise back out of extinction with enormous box office takings. It fared reasonably well on the critical front, but the bottom line was always going to be fairly obvious – if you’re in it for big, daft dinosaur action, you were always going to come away smiling. The same certainly goes for its sequel, though as big movies go, while it will clear up very well money-wise (that’s at least my prediction), it doesn’t really stick its neck out to offer anything utterly game-changing.

This time around, returning characters from the franchise – even those we haven’t seen for a long, long time – get involved in a battle to save once-extinct dinosaurs from an erupting volcano on their island. Cue an intense battle to try and transfer the dinos to a new sanctuary – all the while, there’s a secondary tussle over a sinister new hybrid dinosaur – the Indoraptor – as well as a number of shady goings-on and all the good versus evil archetypes you’ll come to expect. This time around, however, Fallen Kingdom borrows from a number of moments of lore left in the franchise from previous movies, latching onto previous characters and creating new plot strands. It’s action-packed to the teeth – quite literally – but how does it fare as a movie in its own right? 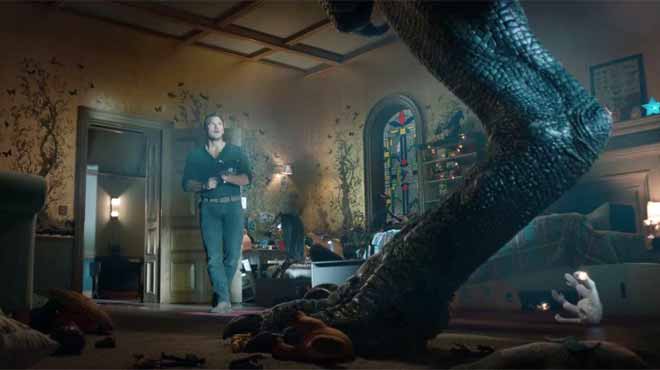 Let’s face the obvious facts – Jurassic Park and Jurassic World fans are not going to be leaving disappointed. There is an incredible bounty of big, bustling CGI here – the budget is enormous – as well as spectacular stunts and action choreography to really wow the right audience. This is a movie which demands viewing in 3D or IMAX – and, at least from a plot and development perspective, there’s plenty here for fans of the franchise to get invested in. For a start, there’s more than a few interesting developments for the main characters, with reasons for them having to get back involved with the dinosaurs actually rather legitimate. While the setup for the plot is fairly decent, however, there are far too many clichés and tropes in play for anything more worthwhile to come forth. The script is by-the-numbers but perhaps pleasingly so for some, particularly as the pacing of the action will more than sweep you forward across the latter two acts.

Fallen Kingdom is by no means a boring movie, but it hardly breaks new ground. If you’re in the mood to watch Hollywood stars go tail-to-tail with colossal CG dinosaurs, your money is hardly wasted here. As a companion piece to the franchise, it’s spot on – there has been intense care and attention put to work here to ensure that this latest adventure ties in well with existing lore and characters – and, as such, for the right people, it’s going to be rather satisfying. For me, personally - while the Jurassic series has never really been on my personal radar – it’s entertaining enough.

This, I feel, is what’s driving down a lot of critical opinion. Were critics and audiences expecting more from Jurassic Park 5? Perhaps – they’ve waited long enough, after all – and the moments where the screenplay does play it safe and does wander into cliché territory really don’t do the film much in the way of favours. What the movie at least does is open things up beyond the park confines that we’ve been used to across the previous movies – and, like some prior instalments, there are also moments of ethical quandary which pop up and help to propel the meat of the script’s motivation. All in all, however, it can get a little muddled – but with the saving grace lying in its visual appeal and its sheer white-knuckle ride, you’re hardly going to care if this movie is aimed at you.

The case for Fallen Kingdom is clear – did you like the previous Jurassic films? Do you like big, nail-biting blockbusters that work especially well in 3D and/or IMAX? Then you will almost certainly enjoy this latest entry in the franchise. It does try to offer a few new ideas and moments – but we’re still waiting for that true breakaway movie that really captures the wonder of Spielberg’s original all those years ago.

Is the Jurassic World Sequel a Flop With Critics?

by Graham Pierrepoint -
Might the latest Jurassic film turn out to be extinct on arrival? Jurassic World – the huge..

by Graham Pierrepoint -
We’re just about coming up to the end of our second year of reviewing movies here at One News..