Vice was always going to be a controversial movie. However – did anyone really expect it to be more controversial with regard to its style and artistic licence as opposed to its handling of subject matter? In any case, it’s up for a few awards at the Oscars later in February, and I dare say that it deserves some of the accolades it’s facing. In a climate where there continues to be so much dissonance with regard to the current US Presidency – and where there appears to be concerns over the continued growth of the ‘alt-right’ in the country – it’s enlightening to remember quite how different – or perhaps how similar – things were only sixteen years ago. If anything, the world was a different kind of scary back then – but without going into full philosophical mode here, let’s actually take a look at the movie on the slate.

Vice is an ambitious biopic-satire-comedy-drama – yes, honestly – focusing on the meteoric rise of Dick Cheney, one-time Vice President of the US, and still regarded as perhaps the most powerful of all time. Cheney remains a mysterious figure regarded in infamy by many, particularly with regard to his role in the War on Terror following 9/11. Vice aims to probe deep into the former VP’s illustrious political past, having worked his way up under Donald Rumsfeld, alongside former President Gerald Ford before taking a break sometime in the 90s – only for it all to kick off again when a certain George W Bush came along. The long and the short of it is, this is a profile of a man we still know so little about – and the movie really does play that to its advantage. 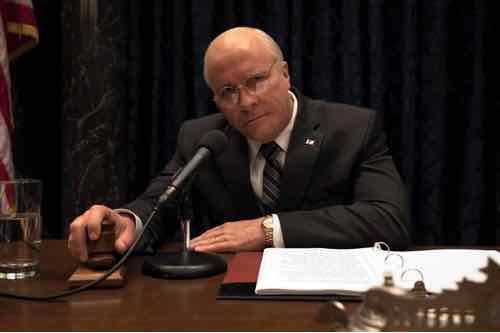 There is a lot to say about Vice that I can’t possibly fit into a comfortable review, so I’ll keep things sweet. Much of the criticism aimed at McKay’s film, and perhaps his directorial style in general, is haphazardness. This is not your average biopic. You don’t get a syrupy look at Cheney’s childhood followed by ups and downs in adulthood with it all culminating in his rise to power. You get a narrator whose presence isn’t explained fully until the final act, you get some scenes completely fabricated and foreshadowed by said narrator, you get fake credits sequences, leaps back and forth across time, annotations, pop culture references and more besides. If you were thinking of heading into Vice without expecting Dick Cheney to be compared to Marvel overlord Galactus, you’re going to be surprised. These choices in film-making have been accused of being too ‘hand-holding’ for the audience, and that viewers are being treated as if they are too stupid to understand what’s going on. I go hard against this grain.

Vice is a hugely creative, entertaining and wry little movie which is a welcome slap to the face amidst thick-laden, boring biopics which have succeeded only in sticking to the template. Cheney is a complex man, one whom is still extremely mysterious – and as such, the movie darts around this by proposing hypotheticals, offering us facts where they are necessary, and asking the right questions.

The performances here give what would otherwise have been plodded over by many critics unkindly as ‘all over the place’ incredible gravitas. Amy Adams sells an intense, modern-day Lady Macbeth – whether or not that was the intention – while Christian Bale serves up an Oscar-demanding performance as a quiet, brooding monolith of a man. A man who appears to be a decent father and husband, but whom makes a number of choice decisions without really giving much away in terms of motive. ‘Beware the quiet man’, the movie paraphrases early on. This line perhaps applies more to Cheney than any other political figurehead in recent history.

Vice also reasonably balanced. You won’t go in expecting a movie running roughshod over Republicanism completely, though it’s clearly a left-leaning film – Cheney is given a fair trial as far as his early life is concerned, only for creeping menace to set in once the War on Terror rolls around. McKay chooses to launch archive footage of Mike Pence and Hillary Clinton discussing Iraq one after the other – a choice which offers a stark side-glance – are all politicians really the same, in the end?

Dick Cheney remains an enigmatic figure, though inarguably still the most authoritative VP in modern history. Bale’s incredible transformation and brooding intensity help along an immensely entertaining patchwork of a movie which I found a very worthwhile watch – one which you may leave feeling a little downhearted, but one which I hope, like me, you’ll consider going back to time and again. There’s so much hatred thrown at movies and biopics which fail to do anything original – why the vitriol for Vice? I, amongst many others, will be supporting it at the Oscars later in February.

· Deepfakes, AI-manipulated videos that often make it appear as if someone is doing or saying something they never actually did,..

Morgan Freeman Will Help You Drive!

by Graham Pierrepoint -
As soon as GPS technology – complete with computerized voice – became a popular commodity..