Disney is kicking off what looks set to be another groundbreaking year of box office smashes for the brand with another of their much-lauded ‘live action remakes’ of their animated classics. Following in the footsteps of Cinderella, The Jungle Book and Beauty and The Beast, Dumbo is a re-imagining of one of the studio’s oldest and perhaps most-revered pictures. Therefore, it was always going to be a little bit of challenge translating it to a whole new audience. While the original movie still has its charms for a modern viewer (racial stereotypes and alcohol references aside), the challenge here was making sure that a story about a cute, timid elephant that can fly can still capture the imaginations of children everywhere. While it succeeds in some regards, sadly, it flat out fails in others.

Re-framing the story from the perspective of Holt Farrier (Farrell) and his kids, who, following the passing of the family’s mother, find themselves readjusting to life on the road as part of a post-war circus troupe. Farrier has returned from the front having lost an arm, and also finds himself forced to cater to the elephants of the Medici Brothers’ Circus having been a big top cowboy his entire career. However, there’s one particular elephant he should be paying attention to – Dumbo, a new arrival who earns his name after a maiden performance that doesn’t go too well. However, ringmaster Max Medici (DeVito) sees dollar signs when it turns out the plucky pachyderm can fly – so too, apparently, does amusement park impresario V.A. Vandevere (Keaton), who has designs on the elephant all of his own. 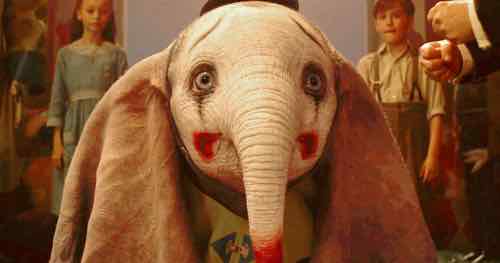 Let’s start with the good. Tim Burton is still a very talented director. He’s always been very at home with reaching into the past and adding his own charm to dark, gloomy scenarios. Dumbo is not a typical Burton film in that it’s not particular dark per se – though it is fairly gloomy in places. Here, however, Burton has captured the early-20th-century travelling circus aesthetic perfectly. He’s worked with DeVito and Keaton before (notably with Batman Returns), and the pair are perfectly cast in their roles.

Dumbo as a character and a creation is perfectly cute, and is probably the standout highlight of the movie – as he should be! The elephant has been well-realised for the live-action stage, and as such, I doubt many will have trouble falling in love with him. His story may be a little different here to his maiden voyage back in Disney’s early days, but he’s still as affable as ever. Thankfully, too, he still doesn’t speak a word.

However, it’s a great shame that there are so many problems with this movie. While DeVito and Keaton are having the time of their lives for the most part, the rest of the cast seem either to be going through the motions or to be completely perplexed by the material they’ve been given. DeVito even disappears around two-thirds of the way in, and when he does reappear, he seems a bit lost.

Arkin’s performance is more than a little stark here, while he is a talented actor and one who has earned his stripes, he really doesn’t fit in well with the material he has been given. The child actors, too – while I hate criticising young talent – really don’t seem ‘into it’. That seems to be the main problem with Dumbo – it feels like a dress rehearsal, and that Burton led with the first takes he got. Seasoned acting talent such as Roshan Seth are also completely wasted as background characters with very little in the way of dialogue. Green, at least, gives the material her all, and is also well-cast.

There are major problems with the story. It whittles along at an absolute break-neck pace, giving little moments to develop characters, relationships, or chances for the audience to get behind the plot. There are a lot of cliches in play here – which is fine for a family movie to an extent – but not only are they signposted with sledgehammer sensitivity, they make up the bulk of the plot. For a movie which seems to never stand still, not much in the way of originality ever gets accomplished. Admittedly, while it’s fair to say it’s a remake and a reimagining of the original animation, it really doesn’t stand on its own two feet too well, either.

My biggest gripe with Dumbo – which will resonate with audiences, too – is that the main character rather feels like a plot device, more than a character. We’re given far too much exposition and meaningless posturing offered by the human cast – with, again, little in the way of genuine development, intrigue or fun – and too little of the elephant himself. That’s a crying shame. Disney could have done more with Dumbo – it would have been great to have seen the elephant have more scenes to himself, without the relentless pacing and poor script hurrying him along. More moments with Dumbo flying, or in awe of some spectacle or other – would have been fantastic. The final scene of the movie, without spoiling anything major, is therefore my favourite.

All in all, however, Dumbo will be very disappointing to plenty of people. It really doesn’t feel like the best Burton could do with the character, and the script is far from its final draft. What’s more, some of the acting is just baffling. Did half of the cast simply not want to be there? There are too many jarring moments scattered throughout for me to give this any higher than a 2-star rating, which is a massive shame, as that’s one cute elephant.