What is happening with DC just lately? In a world where we are expected to see Marvel Studios sweeping up all the plaudits and all the praise, it seems their rival counterparts in the comic book movie industry are fighting back more and more. Wonder Woman and Aquaman already set the standards high above those we experienced with Justice League, Suicide Squad and Batman V Superman. Shazam, however, takes things that one step further – even if it isn’t completely perfect.

Billy Batson (Angel) is a teenager who’s been drifting from foster home to foster home in search of his real mother his entire childhood. When he gets placed with a large family full of lively characters, he’s ready to continue to his search. However, after finding himself at the mercy of a wizard called Shazam from another dimension (Hounsou) who bestows cross-dimensional powers upon him, Batson finds himself transforming into a nameless superhero (Levi) with a whole host of incredible powers. Naturally, he and new partner-in-crime foster brother Freddy (Grazer) put this to their advantage the only way teenage boys can. But there’s a bigger threat out there – and its name is the hateful Dr Sivana (Strong), who’s out to prove to the world that he really matters. 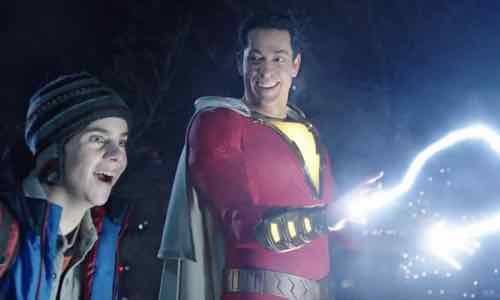 Shazam is the first movie – I think even including Aquaman – that really takes a firm swipe at the sort of comic book humour Marvel has been perfecting for some time now. This movie is simply a lot of fun – from start to finish. The acting talent is well-suited, particularly Levi (who you genuinely forget is actually an adult and not just a kid in an adult’s body), which helps to propel the script along. Strong, as always, is a reliable baddie, and there are a number of genuinely interesting, laugh-out-loud pastiches of comic book standards which I don’t believe I’ve seen Marvel do themselves.

Shazam was always going to sit right with certain people. Younger viewers will likely get a lot out of this movie. I feel the younger characters and cast are portrayed with a lot of realism in many ways. The two teenage leads – Billy and Freddy – are likeable rogues, troubled in their own ways. Billy’s inner turmoil runs core to the plot – though you can see that all of the kids have their own struggles. There’s obviously nice comparisons with how the heroes deal with their struggles in comparison to what the villain does. For the first act, until he at least starts killing innocent people, Dr Sivana is an almost sympathetic antagonist. However, he is suitably bonkers, which is absolutely perfect for a movie like this.

While Shazam is a lot of fun – and I believe it’s thrown a lot of faith back in DC movies as a whole – it certainly relies heavily on jokes used constantly in trailers. The trailers were, after all, what helped to propel this movie into the minds of people like myself who otherwise wouldn’t be as interested in buying a ticket. It’s a shame that so many of the funnier scenes between Billy and Freddy, at least, were used up in promotional material. That being said, there is a fantastic twist waiting for viewers in the third act which comic readers will already be aware of. Anyone paying close attention to the plot, too, will see it approaching – but it’s a lovely little side-step that really helps to energise the final few scenes.

However, what does let Shazam down is the plot. There is an intense focus on the main character being a child in a man’s body – there is joke after joke after joke – and it really does start to insist on its own silliness after a while. The background plot and message (families should look out for one another) are layered on thick, and much of the story relies on a stack of cliches. It’s fine for the movie to make fun of certain tropes in one scene, but perhaps not so great that it falls back on a few lazy touches here and there. The movie does sadly start to drag through its second to third act, and without the aforementioned twist and a number of well-aimed jokes, it could have fizzled out much quicker.

Here’s something to the movie’s credit – you do absolutely get what you pay for. Shazam is great fun, well-realised, very self-aware and extremely well-cast. However, it doesn’t really break as much ground as I was hoping it would. As the latest in a long line of DC movies, it’s an impressive new direction. Aquaman, for me, still offers the best all-around entertainment. But if you like the look of Shazam’s trailers, you’ll have a whale of a time.

My Review of DUNE, As a READER of this Frank Herbert, I LOVED its adaptation, WELL DONE, LOVED IT!

I review the film Black Swan