It’s been a long time since I’ve seen a movie this ugly. And that’s making no jokes about the look of the main character. This is an absolute stinker of a film, and I cannot wait to tell you for why. I genuinely can’t remember the last time I came out of the cinema with a headache. That’s including 3D IMAX pictures, The Crimes of Grindelwald, and The Happytime Murders. Hellboy – the 2019 re-imagining – spectacularly misses just about every single box you need to tick.

Hellboy (2019) is a reboot of the popular comic book character created by Mike Mignola. The character had previously made his way to the big screen in two movies directed by Guillermo Del Toro, however, a third movie never transpired. That is, despite original Hellboy actor Ron Perlman striving to rally the troops to get it done. However, it appears we were always destined to see the reluctant demon hunter get the reboot treatment at some point. 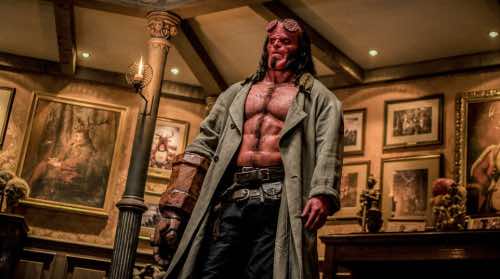 This time around, Hellboy (Harbour) is drafted in by his adopted father (McShane) to investigate an onslaught of giants in the UK. When that turns out to be a ruse, the hunter finds himself in the centre of a struggle with an ages-old witch (Jovovich) and the stuff of Arthurian legend. Following a number of strands from the comic books, the movie does at least attempt to be on-point with stories we’ve seen from the character in the past. That, at the very least, earns the movie its .5 of a star rating.

As for everything else? Name an element all movies should excel in. Let’s round it up.

Acting? The acting is clunky. McShane puts in a good performance as always, but the rest of the cast seem to be reading the script as if they’re questioning what’s been written. Dae Kim and Lane have appalling English accents which feel forced and help to drive home the fact that they’re really not into the production. More disappointingly, David Harbour just isn’t the right fit for Hellboy. This incarnation is whingy, sluggish, stilted and really tries too hard. His iconic refitted arm simply doesn’t move for a good third of the movie. Jovovich yawns her way through a paper-thin villain display. Stephen Graham, at least, is fairly amusing as a repugnant, foul-mouthed Liverpudlian pig demon.

Pacing? Story? Forget about it. Every trope in the book is used to build this movie, and they’re thrown at you as if you’re being continuously pelted. The movie flip flops from one plot strand to another without even taking a breath, failing to offer us any kind of character development, instead roughshod bumbling along as if it’s in a hurry to finish. This might work well with some scripts. However, Hellboy’s script is plugged full of some of the most egregious exposition I’ve ever seen. Your hand is held every single step of the way. It is nothing short of absolutely mind-numbing.

Direction? All over the place. Neil Marshall is a wonderful director. He’s helped to bring at least two iconic episodes of Game of Thrones to TV, meaning it makes sense that he’d be just as good at crafting high-action sequences for the big screen. He brought us the likes of cult classic Dog Soldiers, which works well in its own right. But Hellboy? Action sequences are a mess. Fight scenes are muddled flurries of cheap, over-the-top gore and bad camera angles. The editing is absolutely atrocious. Half of the scenes seem to have post-edit dubbing layered over the top, almost as if they decided the movie wasn’t funny enough when it went to the cutting room.

Effects? Cinematography? Grotesque. Yes – some of the character designs (mentioning Baba Yaga in particular here) are unnerving. However, Hellboy wasn’t all about all-out gore. This rehash of the character’s stories is absolutely set on parading some of the cheapest, most transparent body horror for the absolute sake of it. There are music videos from the early 00s on par with the polish on display here. In fact, Robbie Williams’ controversial video for ‘Rock DJ” offers just as much gore with the same level of special effects, only with a bucketload more panache. It’s an absolute mess of a movie in more ways than one.

To top it off – the real kicker here – it’s BORING. A Hellboy movie – dare I say it – is absolutely the most boring film you will see in 2019. It feels hollow, it feels rushed, it feels confused, it feels as if whoever was involved here actually really didn’t care that much. The acting. The storytelling. The pacing. The designs. The exposition. The layers of gore. The audacity to throw in THREE sequel hooks by the time to movie closes. I’ve absolutely no idea what went on here, but none of it is good.

To cut a long story short – please save your money. Hellboy (2019) is an absolute waste of a cinema screen, and the sooner it disappears from theatres, the better. If anything, we should be holding out hope that we might see Perlman and Del Toro back together in future. That is, of course, if this absolute mess of a movie didn’t just kill off the franchise on the big screen for good.