In a day and age with the likes of the Marvel Cinematic Universe, and even the best of DC’s comics-to-screen output in Aquaman, Wonder Woman and Shazam, there is little room for comic book movies that fall short of the mark. Having seen Avengers: Endgame again recently, I was blown away by how many great scenes I was looking forward to seeing again. It wasn’t as a result of the big budget sets, or battles. It was thanks to the way they treated their characters, many appearing for the very last time. Screenplays need to lift characters off the page. Show, don’t tell, as they always tell writers.

Sadly, Dark Phoenix is a fine example of how not to ‘do’ a comic book movie. The current X-Men saga has been petering out for a few years now, with Apocalypse having been intensely forgettable at best back in 2016. Save for Deadpool and Logan, it’s safe to say fans have been holding their breath for the Marvel Cinematic Universe to bring their magic to this set of characters. 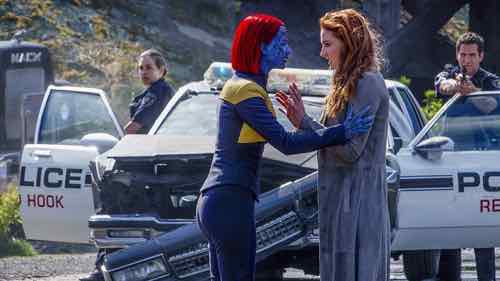 Dark Phoenix is shockingly dull and disappointingly straightforward. The back story is, of course, that the X-Men are a band of mutant humans with extraordinary powers, banded together by Professor Charles Xavier at his School for the Gifted.

In this instalment, Jean Grey (Turner) finds herself taken over by a mysterious alien force after the X-Men take on a rescue mission in deep space. As she returns to life on Earth with her fellow mutants, Grey soon finds that she is experiencing strange, intense new feelings and powers. This leads to a number of catastrophic events and – at the same time – a series of invading aliens hope to use Grey for her newfound abilities.

This is going to be a review that I may have trouble filling. The X-Men movies have been on a strange downturn for a long time now, and while Dark Phoenix at least attempts to eke some sort of drama out of its script, it doesn’t ever get off the ground. The overall feeling is that this movie ‘had to be made’. The plot bumbles along at a pace that’s reasonable, yet passionless. A major character dies halfway through the film, and yet we don’t feel half as much as we should for them. We see other characters react, and the resonance is off. It’s almost as though depth is completely missing.

It’s an odd feeling, and it is certainly to do with the script. While this story would have worked well a few years ago, in a post-Endgame landscape, Dark Phoenix is shockingly lazy. It never leaves its confines or its safety bubble. It brings back old characters and has the potential to open up old wounds, but never dares to tread there. It plays out rather like a poor episode of a Marvel Netflix series as opposed to a feature length movie in its own right. It seems plenty of viewers have my back here, too.

There just seems to be a pervasive sense of disinterest. There are some truly great actors in this cast – all seriously wasted on a script which dawdles along at the absolute minimum, failing to land any serious comic moments or genuine moments of pathos, and a series which most people have already checked out of. As the last X-Men movie on the slate ahead of Disney’s acquisition of 20th Century Fox, this should have been an epic finale. There were stakes here, but they just weren’t very interesting.

The movie trundles off the rails by the time it gets to a climactic, travelling battle – which gets a half-star for being funny for all the wrong reasons - before sleepily falling into what appears to be a conclusion to a series that (in its current form) is just shy of a decade old. It’s extremely disappointing.

The overall feeling that this was pushed out to appease a contract can’t be avoided. While effort is on display here, it is the absolute minimum. Fassbender chews the scenery, having been given very little to work with. Turner tries her best in a leading part that simply doesn’t do her justice. Lawrence is checked-out, and McAvoy and Hoult look keen to act in other things, where they will be infinitely better challenged.

The X-Men, at least on the big screen, will need to go away for a long time. If Dark Phoenix ever had the making of an Endgame-style epic finale (even with half the effort, budget taken into consideration), I might be saying something a little different. But that’s just what Dark Phoenix isn’t – different. This review will serve as a time capsule for my own records, as my memories of the movie are very quickly slipping away. I don’t like giving low grades – but after watching this, you’re left wondering if anyone involved actually cared.

Whether we wanted it or not, “Dark Phoenix” is the end of the main “X-Men” movie series as we know it. It was inevitable as..

The Secret Lives of Pets 2 Movie Review: Too scatter-brained to be entertaining

So little happens in this movie that the climactic battle seems to arrive too soon, before we’ve been given a chance to care.