Quite why they refused to put a ‘4’ on the end of the title for this Men in Black outing remains a mystery, though it’s likely because there was a focus here on starting afresh. The Men in Black series is one which, sadly, dwindled from the first instalment onwards, and I’m disappointed to say that this latest entry in the franchise doesn’t really do much to elevate things. In a world with so much popular sci-fi and fantasy on the big screen right now, there is bound to be a place for this franchise – but not with this kind of effort.

MIB 4 follows Molly (Thompson), who, having been obsessed with aliens since her encounter with one as a child, manages to sneak her way into the compound of the Men in Black. For all intents and purposes, the MIB help to keep the peace between alien factions, and to ensure that Earth is protected against extra-terrestrial activity. As such, the organisation is top secret. Becoming Agent M, Molly teams up with Agent H (Hemsworth), as he is tasked to protect alien royalty. However, when things go awry, a battle for a secret artefact emerges – as do a number of hostile creatures hell bent on seizing it at all costs. 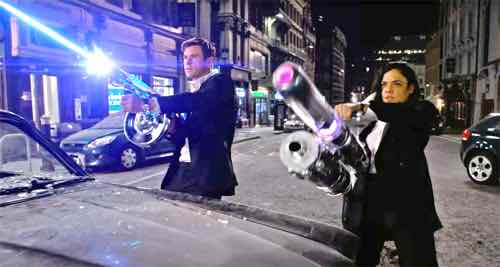 On paper, MIB 4 sounds great. Visually, it’s pretty appealing, too. Some of the CG is dated now, however, it’s perfect for the character designs. There has been a strong attempt to try and keep to the aesthetics of the series thus far, which have always been a driving force for its popularity. Certainly, there have been stacks of effort put into the visual medium, the stunts, and the imaginative technology. This side of things is absolutely fine – as is the cast, who, for the most part, really do try their best.

But that’s the main problem, for me, with this film. The cast has to try to keep the writing afloat. It’s a fairly standard plot, one with twists you’ll spot coming from five thousand miles away – that doesn’t always spoil a movie, but what does spoil it is a lack of engaging writing. There are ideas in place here, and there are plenty of characters and some nice lore to carry it along, but it somehow feels slapdash. The script plods along and the dialogue occasionally sparks up to offer some interesting moments. Beyond that, however, it’s really hard to get engaged with this movie.

It’s quite hard for me to get to grips with, in fact. One major gripe I could use to help cement my point is Hemsworth’s character. Agent H is supposedly written to be a devil-may-care type, a bit of a rogue, but he gets the job done. Hemsworth tries his absolute best with the material here, but he comes across as discount Thor – which really isn’t helped by the fact that he appears to be channelling the son of Odin’s voice throughout. Thompson is a capable lead, but her character is tediously boring. Her backstory is interesting, but she lacks certain character nuances and traits that could have helped us connect with her a little further.

What’s most jarring about MIB 4 for me is that it’s unmemorable. When the first MIB came along in 1997, it was a completely new ball game as far as cinema was concerned. Fair enough, it had flaws, but it had a vision, and it was a movie you’d remember and come back to again and again. MIB 4 doesn’t really have much of a focus. It kind of bumbles along in a ‘let’s get this over with’ attitude that really kind of glosses over some of the more interesting areas it could have explored. It is nowhere near as pathetic as Hellboy 2019 in terms of execution, but it does feel a bit lost. A few more rewrites, and a little more original character development, could have elevated this entry in the series.

As such, however, and I have to agree with other critics on this – it’s likely not going to hold up to the other MIBs (even the third one). As with X-Men, I feel this is a franchise which needs to take another hiatus, and to come back completely new – again. That may have to be a few years, however, it’ll be interesting to see what a new MIB could look like in a decade’s time. The cinema landscape is shifting, and MIB 4 feels like it belongs in the early 00s – in a disappointing way. It’s pleasant enough to watch, but you’ll be hard pushed to find a reason to come back to it.

Sony Chief Tom Rothman on Quentin Tarantino and Original Films: ‘You Have to Commit’

The 100 best drama movies of all time, according to critics

Sony boss says 'Men in Black: International' flopped at the box office because there 'was not a strong enough idea'

San Diego Comic-Con 2019 Schedule: Here Are All the Must-See Panels and Screenings

How Amazon's new superhero TV show, 'The Boys,' was shaped by Trump, Me Too, and 'sweet, sweet Bezos money'