Am I really giving a Fast & Furious movie a 4.5 star rating? Perhaps I’ve had a change of heart over these sorts of movies over the years, because I can quite safely say that I had an absolutely fantastic time watching Hobbs and Shaw, and I think plenty more people will, too.

Fast & Furious is an odd franchise which has evolved massively if you look back at the earlier instalments. Street racing and petty crime have slowly evolved into big, brash fights back against international terrorism over what now amounts to nine different movies. Yes, the series post FF4 is markedly different from the original trilogy, however, this is a freight train of a franchise that shows no sign of slowing down. Does Hobbs & Shaw bring anything new to the table? In some ways yes, in a lot of ways, no – but does it have a good time while doing any of it? 100% affirmative. 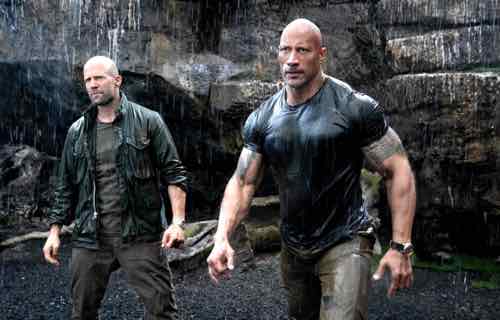 This spin-off from the main series sees MI6 agent Hattie Shaw (Kirby) make off with a deadly virus that Brixton Lore (Elba) wants to use to help push the profile of Eteon, an organisation hell-bent on ‘upgrading’ humanity. Luke Hobbs (Johnson) and Deckard Shaw (Statham) – Agent Shaw’s brother – are brought in to work together to bring the virus into safe keeping, with Hattie assumed to have gone rogue. Hobbs and Shaw have worked together to save the world before. However, they really can’t stand each other, and it shows. Ultimately, you have a big scale buddy comedy on your hands here, and it’s an absolute riot.

The main standout of this movie is the cast. The main stars – Johnson, Statham, Kirby, Elba – are all amazingly charismatic. Yes, the script has touches and swerves which have been done to death elsewhere – but with this team at the helm, you’re going to want to stick around. Yes, this is what’s helped the FF movies massively, too – but with a focus on Hobbs and Shaw, there’s more fun gleaned from their very specific chemistry. Both are hardmen with hearts of gold – but neither of them take any (insert expletive) from anybody.

There have been complaints made about the narrative being a little wayward, and while I have to agree, I feel the pacing is precise, and I feel that there’s enough variety to fill the runtime. I do feel that it is maybe 30 minutes too long, however, there are action movies out there which are shorter, and feel longer. This takes on a variety of locations, from London to Samoa, and the stuntwork is nothing short of incredible. The FF movies try to outdo themselves each and every time – and while some will feel that this spin-off may even dumb things down a little, there are moments you simply can’t conceive of until you see them.

Yes, Hobbs & Shaw is the type of cinema you need to turn your brain off for before you sit down. Not all movies that do that are worth seeing. However, this is a movie which requires brain shutdown and which gives you everything on a plate. Big visuals, a fantastic cast, a script which has a few genuinely funny zingers, and above all, genuine joy. This movie looked like an absolute blast to film, green screen or not, and it’s worth sticking around to the credits to see just how many stuntpeople worked on it. It’s nothing short of absolute mayhem, and it really isn’t done by halves.

This is not a movie which is going to challenge any ‘best of’ lists. I dare say all FF fans will get into it, however, it’s an excellent companion, and maybe even a nice route into the franchise for some people. You need no prior knowledge of what these characters have done prior to the movie. All you need to know is that they’re big, they’re bad, and they’re here to kick butt.

Hobbs & Shaw is a really welcome diversion in a sea of movies which have muddled around or missed the mark recently. 2019 has been a fantastic year for movies so far, but it has to be said that Disney isn’t taking away all of the plaudits. This is a fast, furious, relentless joyride and it’s one I feel merits watching if your interest is even slightly piqued. For the cast alone, it’s worth the price of admission. There are some really surprising cameos in here, too – and I’m impressed the marketing team refrained from plastering them all over the trailers. No spoilers – but they’re pretty unexpected, and pretty big – and if you like your movies to be big, daft and over-the-top, this one will more than do the business for you.

The 6 winners and losers at the 2019 summer box office

With all the big releases from the summer movie season out, it's time to take a look at what worked and what didn't the past few..

Does ‘Hobbs & Shaw’ Have a Post-Credits Scene?

· Universal's "Good Boys" tops the domestic box office with an estimated $21 million.
· A rare win for an R-rated comedy,..

'Scary Stories to Tell in the Dark' is the latest horror hit to break through at the box office, in an industry otherwise dominated by Disney