If I run out of things to say about Crawl, it’s not for want of trying to review it. In a movie landscape where animal-based disaster flicks are really coming back in a big way, this is a movie which was always going to be inevitable. In some ways, Crawl could well be this year’s answer to The Meg – only, perhaps not as self-aware, and perhaps less likely to do a decent turn at the box office.

In any case, this may be the shortest introduction to a movie I’ve ever had to do. Haley (Scodelario) heads into a category five hurricane to find her Dad (Pepper), stranded in their old family home. He’s been attacked by an alligator, and floodwater is rising. There’s more of the toothy critters looming large, and the pair – as well as their dog – have to try and escape alive. That’s pretty much it – you can more or less fill in the blanks.

However, the difference between a successful movie with this kind of framework, and one which falls flat on its face, is how they conduct themselves. The Meg worked so well last year because it had a damn good time with the absurdity of the premise. It didn’t hurt to have Jason Statham on board, either. Crawl, while just as action-packed, suffers a little in that – while it is patently ridiculous in many ways – it appears to take itself a little too seriously at points. 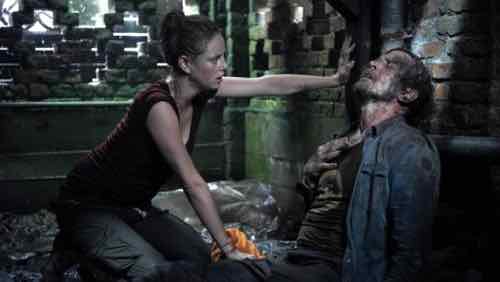 This, I feel, isn’t helped by the fact that – and I’m not spoiling anything here – the main characters are complete imbeciles. The intensity and absurdity of the plot is only enhanced by the poor choices the two leads make. You can forgive all the hand waves in the plot (such as both Haley and Dave suffering excruciating, life-threatening injuries, yet still being able to swim around in standing water). That’s all part of the fun. But when we’re given two characters who we are told to feel seriously about – who continue to make blindingly dense errors throughout the film – it kind of numbs the effect.

I feel I’ve ragged on Crawl enough, at least for now, so let’s focus on the positives. What you see, or what you want to see, is absolutely what you will get. It’s nearly 90 minutes of people desperately trying to evade being killed by weirdly aggressive alligators. There are some fatalities, and yes, they are gloriously over the top. In a sick way, yes, you’ll enjoy them. I feel there is, generally, very little room for disappointment here. However, I just wish the script hadn’t taken itself so seriously.

Crawl is the sort of movie you’d expect to see as an ‘original’ on the SyFy Channel, or even as a direct-to-DVD purchase. It has slightly higher production values, to be fair, but just as much gravitas. I feel it’s been perfectly released in a summer block where Marvel fatigue is running high, where a select audience are going to head along to Tarantino’s latest, and where there is a gap in the market. There’s a distinct gap for big, dumb fun. That gap is partially filled by Angel Has Fallen, of course, but Crawl seems to fulfil 2019’s promise of delivering a creature feature that isn’t completely and utterly awful.

This is a movie which, as I always say, you should switch your brain off before watching. You won’t care about the characters, or their backstories. It’s a shame, but you won’t. You’re here to watch some big brutes of reptiles hunker down on hapless hurricane fodder. You’re also here in the hope that the dog survives. I normally don’t post any spoilers whatsoever, but I feel I need to offer this one – skip this next line – the dog survives. You can now enjoy the movie without fearing what happens to the duo’s canine chum.

What the movie does very effectively is set up solid jump scares, ones with genuine menace and actual horror intent. The last time I saw jump scares applied with such craft was The Conjuring 2 – and that’s very much a leading example of how to get this type of horror trope right. Crawl, therefore, does horrify well. You are invested in what happens, whether or not the characters utterly bore you to tears.

Do I recommend that you go see Crawl? If you like the premise, and are happy to relax with an hour and a half of murky water and crawlspace-defying action, then yes – go right ahead. Just don’t expect it to ascend to the heights of action-horror movie greatness some critics would have you believe. It’s a dumb, fun movie – but one with a fair bit of wasted potential to boot.

Before you do go see it – remember this question I’m going to ask you. Would you really go back for your phone?