So, I’ll start as I always do – with a brief overview. Angel is the third in a line of movies starring Gerard Butler as Secret Service agent Mike Banning, who has previously been called upon to help the US Presidency survive terrorism and obnoxiously loud explosions with, naturally, decorated success. This time around, Banning is suffering from a spine problem given his previous work, and finds himself struggling to accept that President Trumbull (Freeman) may be putting him up for head of the Secret Service.

This postulating doesn’t last long, however, as Banning, Trumbull and several Service agents are ambushed on a fishing trip by a fleet of mysterious drones. All but the President and Trumbull survive – and when the agent survives, he’s being questioned for mass murder, and for an assassination attempt on the President. Who’s setting him up – and why?

I’m obviously going to be making comparisons between London and Angel in this review, so let me lead in with that. London Has Fallen was bloated, showy, suffered from poor dialogue, and generally took far too much pride in very, very little. My review for the movie scored it at 1.5 stars, concerned that it took itself far too seriously. Looking back, that was only part of the dilemma. The other part, crucially was that it’s incredibly boring. 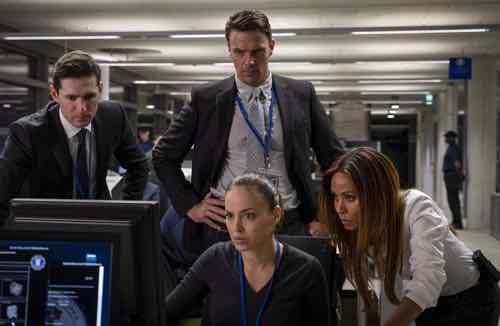 So what’s changed to make Angel such a dramatic diversion of quality? There’s a new director, and a new team of screenplay scribes. That helps. What’s more, the story here isn’t as grandiose, nor is it as wilful in its execution. What struck me right away with Angel is that I actually, genuinely, cared about what was going to happen to Banning this time around. In London, Banning was a thick-headed, trigger-happy action hero who breezed through the script with little in the way of genuine drama. It was all show.

Angel is genuinely tense. Butler plays Banning here as a man at a pivotal moment in his life, hiding painkillers from his wife and struggling to live up to who the President thinks he is. What’s more, once he becomes public enemy number one, I was genuinely invested in seeing what happened next. The direction is tight, the pacing is great, and the pyrotechnics offer just enough. No cities fall to the ground. This movie is more of a character study buried in a standard action plot. It’s not going to win awards, but it is genuinely watchable.

Let’s get to the negative points. The story is, sadly, fairly predictable. While action movies are always going to be fairly cut and dried to some extent, you know exactly how the movie is going to end. I was able to tell who the main villains were from their first appearances on screen. Yes – it’s hidden villain syndrome again – a trope which Disney is hopefully doing away with, but one that the ‘Fallen’ series seems happy to turn to. Therefore, if you expect Angel to do any more than the absolute basics, you’re probably going to be disappointed.

But let’s get back to something positive. Nick Nolte steals every scene he is in, willingly blowing things up with the kind of abandon more action movies should lead with. When the script is trying to be funny, it’s actually funny. None of the shoehorned jokes London plastered all over the place. There is something compelling about Angel which makes it instantly watchable, which is far beyond what I expected.

I’ll address the points I made regarding London taking itself too seriously – Angel has a good balance. It knows when it’s being ridiculous and carefully plays at it. Unlike Butler’s performance in London, I wasn’t having to wipe the ham out of my eyes at the end of every scene. It’s actually pretty understated, considering the franchise it’s in.

I feel this has been the biggest turnaround for me in terms of a movie series’ quality. While many film series seem to dwindle or suffer beyond the second instalment, Fallen 3 actually makes the changes and puts in the effort I expected from its predecessor. It’s actually really refreshing to see positive changes made in such a way. I’m not owed quality entertainment by any means – but while London was, and still is, a disposable mess of a film, Angel is an action movie which might actually hold your attention for more than five minutes.

However, if you enjoyed the first two movies, I can only tell you that Angel is slightly different – it’s better. If you like big action movies and are willing to hand-wave a predictable plot twist or two, you’re in for some solid direction and a genuinely entertaining movie. It’s always nice to be surprised!

The Matrix Resurrections Movie Clip - I Fall Or I Fly

The Matrix Resurrections Movie Clip - I Fall Or I Fly - From visionary filmmaker Lana Wachowski comes “The Matrix..

'IT: Chapter Two' Scares Its Way Into The Box Office With $91M Debut