2019 will remain, for me, as the year where I gave two yeti-themed movies five stars out of five. With three animated movies now receiving the golden accolade, is there a pattern emerging? Not necessarily. It’s just Abominable is such a joyous triumph in just about every regard that I find it impossible to reprimand. DreamWorks is a studio which has been fairly hit and miss over the years, however, with this latest effort, they have returned to the roots of some of their best-loved franchises.

Abominable is, as the name suggests, based around the idea of a yeti – a baby yeti at that, finding himself lost amongst the skyscrapers of Shanghai, China. He’s being hunted down by an animal collector (Izzard) who will stop at nothing to find the creature that evaded him many years ago in the Himalayan mountains. However, Yi (Bennet), a teenager who finds herself working long hours to fund a dream trip across the country, stumbles into the yeti, whom she dubs ‘Everest’. Realising that Everest is far from home, she sets out to take him all the way back to the Himalayas – with social media-obsessed Jin and mischievous Peng joining her for the ride. Only – the animal collectors are on their trail.

On paper, this really doesn’t sound like much – and from the trailer alone, it really didn’t seem like it was going to break any new ground. I guess it doesn’t, at least not from a story perspective. However, that’s hardly the point of Abominable, as we find out fairly quickly. 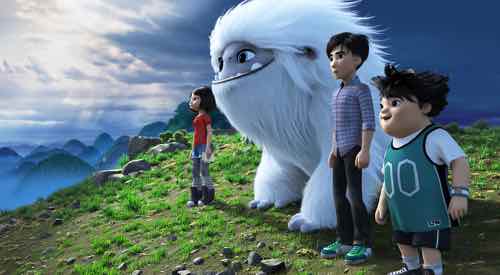 There is a genuine heart to this movie which is clear from the get-go. While we have seen plenty of animations like this over the years, the emotional intensity and the depth of character are on par with how DreamWorks first launched their How To Train Your Dragon series. The characters are likeable, they seem realistic (sans the yeti), and there are a few core ideas here which are genuinely surprising. Sure, family movies have dealt with this idea of family being important before – but I’m not sure many of done it in quite the same way Abominable has.

The journey is absolutely mesmerising. While this is, bare bones, a simple story about getting ‘home’, the visual journey – and indeed the character journeys – are worth holding out for. Yes, there are a few twists in the tale which you will likely spot from a mile away. But consider the medium. Instead of relying on pointless pop culture jokes and irritating characters, DreamWorks seem to have focused here on creating a clear, concise narrative. They’ve focused on showing us their take on rural China, which is glorious to behold.

There were no moments in this movie where I rolled my eyes, or looked at my watch. Yes, the villain archetypes are well-trodden, but there are a few moments which genuinely surprised me, particularly with regard to Izzard’s character. That alone makes this a movie which stands out from a sea of cookie-cutter kids’ films. In a world where a studio can make something as banal as The Boss Baby – and then turn around and develop an experience like this – it’s always worth holding out hope for better.

Abominable is, generally, a fairly standard kids’ movie, but it is bizarrely arresting in every scene. Your attention is captured. Unlike lesser efforts in, say, Trolls, or Captain Underpants, you often forget what you’re watching. There’s enough drive and enough spirit in the execution to keep you interested. It never feels like a by-the-numbers exercise, despite the fact that it really does borrow from a well-worn template.

There is also a nice avoidance of exposition, at least there is less than you might expect. There are whole chunks of scenes which don’t give you any explanatory dialogue. You’re just taken along for the ride. It’s my favourite type of film – one where your hand isn’t held, at least not too much, and you’re given an opportunity just to bask in it. This doesn’t always work with some movies (anyone remember Midnight Special? Thought not) – but family movies which show more than they tell have a very special place in my heart.

I went into Abominable expecting something sub-par. I love being surprised – and I’m happy to say that I’m finding it difficult to play this movie down. It’s the third movie of 2019 to earn top marks from me, and it’s only the sixth overall. When it comes to the end of year rankings, I’m going to have an unenviable task of deciding which ape-man movie I preferred – this, or Missing Link? In any case, I have no hesitation in recommending Abominable as a great family film, and it’s one I’ll watch time and again without complaint.