A sequel to Zombieland is something that pretty much came out of nowhere. While zombies are still pretty popular with the target demographic, it’s been a while since brain-eaters were considered ‘mainstream fodder’. That being said, Zombieland, which originally saw release ten years ago, had its finger on the pulse of anarchic humour. It knew how to do interesting things with the concept, when other movies, TV shows and videogames were milking the genre for horror. A sequel was always going to be a good thing, but a gap of ten years is more than a little bizarre. It’s thought to have been stuck in development hell for several years, but it has thankfully seen the light of day.

Zombieland 2, as it’ll be known throughout this review, takes note of the big gap between movies and puts the main cast of zombie survivors out in the White House. After Little Rock (Breslin) goes AWOL, striving to find other survivors her own age, Wichita (Stone), Tallahassee (Harrelson) and Columbus (Eisenberg) take to the road once again, taking fellow survivor Madison (Deutsch) along for the ride. What ensues is, naturally, a series of events revolving around nigh-indestructible zombies, weird new rides, and a handful of jokes surrounding Elvis Presley. 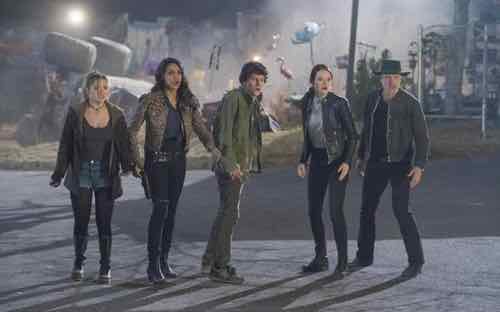 Zombieland 2 is gloriously bonkers and knowingly so. It’s tapped into its own sense of humour and style wonderfully well after a decade away, and the whole cast have slotted back in without any complaints. Stone in particular is interesting, as she has of course benefited from a huge career boost in La La Land in the interim. However, this cast is just a joy to watch – Deutch in particular turns a well-worn character trope (blonde airhead) into something genuinely amusing. Harrelson was born to play Tallahassee, too, and he naturally steals every scene he’s a part of – which is most of them.

Zombie fans will love the creativity here, and while zombie outbreaks are certainly nothing new for the big screen, it’s great to see the genre still showing a little bit of life – no pun intended. I dare say that you may need to watch the first movie to get the most out of the character journeys here, but for the most part, it works absolutely fine on its own. It’s more than on par with its predecessor, a rare one-two for quality, neither stretching ahead of the other.

The movie does suffer a little in terms of plot – in that it’s paper-thin and can be summed up in a handful of words – but did it really need anything original? It’s a nice exploration of these characters, and the runtime gives us just enough to get to know them even better. It does make you wonder why a sequel didn’t happen sooner – though word is that a number of issues befell production, despite everyone being back on board.

Zombieland isn’t going to appeal to everyone, but it really does succeed in terms of big laughs. Rather than rely on clever jokes most of the time – though it certainly has them – it goes for the jugular in the form of delivery. The delivery of a joke, to me, is much more important than the punchline – and I’ll say it again – that Harrelson chewing the scenery for almost two hours is a joy to behold. I can say with no uncertainty that if you liked the first movie, or at least like the premise of this one, you’re going to have a good time.

There are a few missed beats here and there, but I feel that’s purely because there needs to be more of this. Having remembered only half-liking the first movie, I was genuinely surprised by how entertaining this was. It’s something I will gladly watch again as soon as it heads to streaming. Perhaps it’s due to a lack of really knowing, original comedies at the cinema right now. Comedy is a hard genre to get right, particularly as a lot of it depends on timing and delivery. While I enjoyed Stuber from earlier this year – and many didn’t – Zombieland 2 blows it clean out of the water.

Zombieland 2 is so effective because it doesn’t pull punches. What you see is what you get, and it’s going to do what it wants, whether people like it or not. Some of the jokes miss, but it’s an enormous ratio of positive to negative – probably nine out of ten jokes really land. We just could’ve done with this sooner. Given that it’s doing very well at the box office right now, I wouldn’t be too surprised if we get a third entry in the next few years.

Also – a tip for fans of the first movie – stick around for something truly spectacular shortly after the credits start – you’re not going to want to miss it.

Addendum: Further to my recent review of ‘Joker’, which I gave 2.5 stars, it has emerged that convicted musician Gary Glitter will not receive royalties from the inclusion of his song ‘Rock and Roll (Part Two)’ on the soundtrack. I have therefore retroactively awarded the movie a 4.5 stars.

Edward James Olmos has appeared in many films that explore what it means to be Mexican in America, but “Windows on the World”..

‘Maleficent: Mistress of Evil’ Director Takes Those ‘Game of Thrones’ Comparisons as a ‘Compliment’ (Video)

'Maleficent' sequel wins the box office but performs below expectations