MOVIE REVIEW: Jumanji: The Next Level MOVIE REVIEW: Jumanji: The Next Level


JUMANJI: THE NEXT LEVEL

As someone who was never a fan of the original Jumanji – you’re free to stop reading there if you like – I found ‘Welcome to The Jungle’, the 2017 reimagining of the franchise, to be genuinely surprising. It was well-cast, creative, funny, and well worthy of watching again and again. I was even impressed by the stunts – and the fact that a sequel was on the horizon genuinely appealed to me. That doesn’t happen very often!

‘The Next Level’, or Jumanji 3 for those who are keeping score, takes us back to the gang from ‘Welcome to The Jungle’, who are trying their hardest to stay in touch. However, things seem to have gone awry between Spencer (Wolff) and Martha (Turner) in particular, with the former keeping himself to himself. Having spoken to his eccentric grandfather Eddie (DeVito) about mortality, Spencer decides to re-activate the infamous Jumanji videogame, which once sucked the gang of four into the virtual world a year before, forcing them to take on character avatars. This time, however, Spencer finds himself going in alone – forcing his friends, as well as Eddie and one-time business partner Milo (Glover) to go on after him. 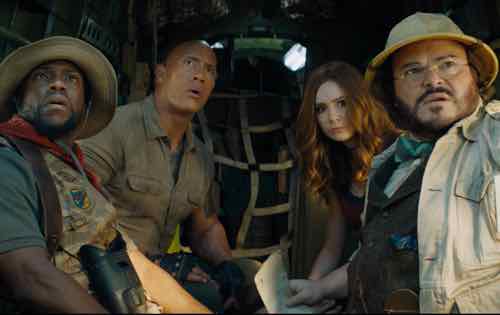 There are two main appeals about this movie, and the main one is, of course, the cast. As the story centres around real world people becoming avatars in a game, we get to see Dwayne Johnson portray Danny DeVito, Kevin Hart portraying Danny Glover, and Jack Black playing Ser’Darius Blain, while he had impersonated Madison Iseman in the last movie. Confused? Don’t be – it’s a fantastic formula, and it works brilliantly well. Hart is, perhaps, born to play Danny Glover, and he definitely steals most of the screen time.

However, the other big draw here is the action. This is a movie which knows when to move along quickly, and when to balance comedy with genuine moments of high-octane stunts. There are sequences where the cast is forced to tangle with ostriches, mandrills and violent non-player characters – and it’s all done in such a rip-roaring fashion that you can’t help but keep watching. Jumanji 2 was high-octane enough, but Jumanji 3 takes things, fittingly, to the next level. It is completely relentless, and while it does try to tell a story along the way, you really won’t care.

It’s a movie which is the perfect example of enjoyable spectacle. It is never going to win any big awards, and it’s probably not going to be on many people’s best-of lists. However, what it does do is take us back to a story world that still feels fresh and exciting, and what’s more, it does so with precision and gusto. There are no moments here which I felt were tacked-on or handled poorly. There are a handful of touches towards the end to wrap up the story which I feel were maybe a little tertiary, but that doesn’t downplay the rest of the experience. There is sheer joy to be had in watching both Dwayne Johnson and Awkwafina take turns impersonating Danny DeVito. It’s chock-full of bonkers concepts and set pieces that absolutely boggle your eyes.

The last Jumanji movie was placed around this time in the yearly schedules, and it’s the perfect place for it. It’s the sort of movie you want to watch on the run-up to Christmas and New Year, when you’re done with having to watch anything too heavy or demanding. That being said, Star Wars IX is on the way, which is going to mean one last big push for drama-heavy cinema for at least 180 more minutes.

However, it’s more than that – it’s genuinely surprising. Jumanji 3 is a riotous piece of family fun and it’s a movie I will look forward to seeing again on home release. It benefits from a great cast, solid writing, and honest creativity – which, as we all know, can be lacking in Hollywood at the best of times. Therefore, I can honestly say Jumanji 3 surpasses its predecessors, and I do hope there’s room for one more, providing the cast is back in again for one last adventure.

We’re coming towards the end of the year now – so what’s left on the slate? What will take my coveted prizes for Best Movie of 2019 and Worst Movie of 2019? You’ll find out soon enough.

Does ‘Jumanji: The Next Level’ Have a Post-Credits Scene?

Since “Jumanji: Welcome to the Jungle” more than held its own against “Star Wars: The Last Jedi” back in 2017, it’s safe..

The best video games of 2019, from 'Apex Legends' to the 'Legend of Zelda'

· *This year was somewhat slow for new video game releases, with multiple publishers working on games for the new consoles coming..

'Star Wars: The Rise of Skywalker' has the third-best opening of the year with $176 million, but earns less than 'The Last Jedi' (DIS)