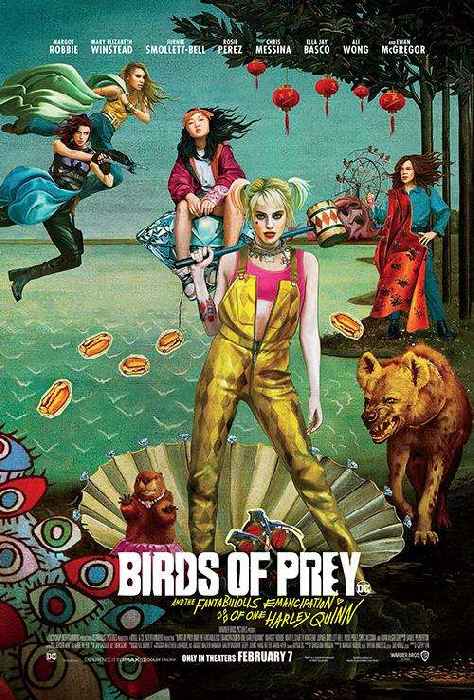 Birds of Prey is a movie which, if reports are anything to go by, is a rare spectacle. Not in terms of content, sadly, but in terms of performance. This long-awaited breakout for the character of Harley Quinn (Robbie) from the maligned Suicide Squad of 2020 has clearly been a labour of love – yet it holds the dubious distinction of struggling at the box office while receiving favourable reviews. Is it deserved?

Following on from Suicide Squad, arch Gotham villain Harley Quinn finds herself separating from the Joker (and thus that movie’s attachments, we’re to presume). Quinn, always one for chaos, therefore finds herself dealing with the break-up in myriad destruction, before finding herself involved in a whole new mission. Teaming up with a misfit band of vigilantes, nightclub singers and police detectives, Quinn is convinced to help a young charge being hunted down by malicious gangster Roman Sionis (McGregor). What ensues, as you can imagine, are a variety of slick, comic-book stunts and violence, as Quinn continues to narrate her own tale (even squabbling with herself along the way).

Harley Quinn has been a marketable character since the early 90s, and as a result, her own breakout movie was all but inevitable. Robbie herself produced on Birds of Prey, which means it’s certainly been a passion project. Quinn was inarguably the breakout star of Suicide Squad, in a movie which suffered with the likes of Jared Leto’s Joker and a screenplay that focused more on the soundtrack than anything particularly entertaining.

Birds of Prey, however, seems to have learnt from this. What you can immediately expect, if you like the Quinn character and are interested in seeing where this goes, is a lot of fun. It’s a visual feast, with choreography and action scenes being perhaps more chaotic than those you’d see in Suicide Squad, and thus even more fun to boot. While the screenplay may still not be perfect, it’s much tighter than much of what DC has pitched to us in recent years, and as a result, it’s a firm step in the right direction – yet again, more good news for DC.

Robbie has the charisma to embody Quinn, and as a result, she sets herself up as a female counterpart to Ryan Reynolds’ Deadpool in many respects. She’s perhaps even more anarchic, but at the same time, Deadpool and its sequel feel a little more focused, taking more time out of the action to revel at its absurdity. Deadpool feels more of an everyman than Quinn, of course, but I’m digressing.

Birds of Prey will play fantastically well to its target audience. It’s clear that a lot of passion has gone into making the movie, and it is a great example of a post ‘Me Too’ movie that pushes female-led comic book action to the fore. Quinn’s main team is diverse and electric, though there’s no doubt that this is more of a Harley Quinn movie than a Birds of Prey picture – which is likely one good reason for its name change. That, and ‘Birds of Prey: The Fantabulous Emancipation of One Harley Quinn’ really doesn’t roll off the tongue.

Birds of Prey, or Harley Quinn, however you want to call it, is a success. However, there is still a way to go before DC takes a full grip on its more absurd characters. This movie goes at break-neck speed, barely taking a moment to look at itself – meaning that some comic book movie purists may find it a little too try-hard in some places. However, as pure spectacle it works more than reasonably well. If its aim was solely to erase our memories of Suicide Squad, one of the worst blockbusters of 2016, then mission accomplished – just about.

However, Birds of Prey’s performance at the box office is fascinating. I saw this and am reviewing it some time after its initial release. It’s a rare case in the sense that it’s performing better than many people expected critically, but worse than expected financially. Releasing in February may have been considered a ‘safe’ option, however, it’s bizarre that Sonic the Hedgehog appears to be swallowing up all the attention – as a movie for a completely different audience.

Therefore, we’re not really clear on where things are heading for Robbie and Quinn in future. DC does have a knack for dishing out great anti-hero stories on the visual medium (their fantastic TV series Doom Patrol, and to a lesser extent Swamp Thing are remarkable testaments to this). However, there’s a fear in the air that the world may have just moved on from Harley Quinn, right when Robbie was just getting started – and Birds of Prey is a great launchpad, just not brilliant.

Does ‘Birds of Prey’ Have a Post-Credits Scene?

It’s been a long road to recovery for the DC Extended Universe after all that madness with “Justice League,” “Suicide..

‘Birds of Prey’ Review: Nihilism for Fun and Profit