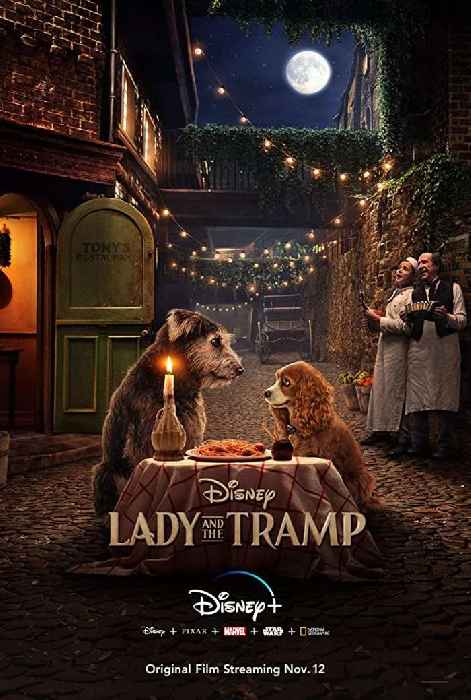 
LADY AND THE TRAMP

Firstly, I must thank our readers for bearing with us as One News Page adjusts to changes brought in through COVID-19 social distancing measures. With new movies set to head to video on demand regularly, we’re now in a position to offer you regular reviews and pieces again! To kick things off, I’ve decided to take a look at a movie that’s been out for a while in the US, but which has recently emerged on Disney+ in the UK, launching this past week.

Disney has, of course, a recent habit of converting its beloved animated movies into live-action properties. In many cases, this works very well indeed. For example, The Jungle Book, Aladdin and Cinderella all converted well on the big screen. However, for each of these – and more – there are Dumbo, The Lion King, Alice in Wonderland and Beauty and the Beast. Converting Disney to live action seems to be pretty hit and miss right now. With Mulan just around the corner, it makes sense to take a look at Lady and The Tramp, a remake that’s exclusive to video on demand.

The story – which is as old as the hills, thanks to the fact it’s one of Disney’s best-enduring classics – centres around Lady (Thompson), a pampered spaniel who finds her life turned upside down when her owners have a baby. Worried that she is being forced out of the family to make room, a mishap leads Lady onto the streets and in the company of The Tramp, a streetwise canine who has a pretty sad backstory of his own. From here, you know how this goes – who hasn’t seen the ‘meatball’ scene? 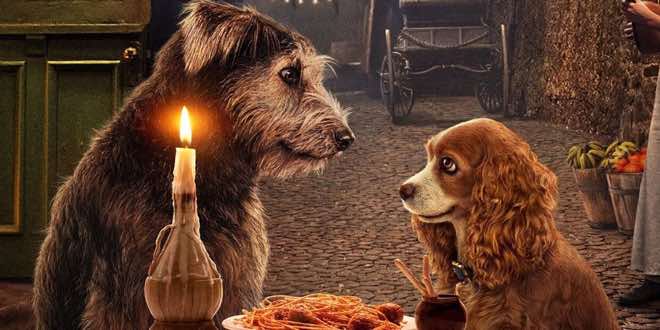 With Lady and The Tramp being such a classic property, many are likely worrying that the movie is going to cross a few barriers and to update more than a few things. In a way, of course it does – racial stereotyping with a pair of nuisance cats has been thoroughly overwritten for good reason. What’s more, this is an early 20th century Georgia which is racially balanced, though this hardly occurred to me – clearly an indication that it’s handled rather well.

Regardless, this is a movie about talking dogs. And it works impressively well. The general consensus of the film is that it works well, though maybe not spectacular – and I’d be inclined to agree. Unlike some of the other live-action remakes released in the last few years, Lady and The Tramp 2019 actually gets the balance right. The changes they make are subtle yet fresh. Lady has more of an attitude and a bite to her here, though not enough for it to appear insulting. Some characters, such as Jock, portrayed here by Ashley Jensen, undergo massive transformations – he is now a she, and is ideally cast. In fact, much of the cast really get into the story.

It’s overwhelmingly pleasant and harmless. Unlike the exceptionally lazy Lion King, or markedly different Dumbo, Lady and The Tramp feels like an upgrade that went through plenty of filters. They’ve taken out the outdated jokes and stereotypes and have smoothed them over for a modern audience, presenting a genuinely funny, endearing film that’s actually pretty surprising. I haven’t been too keen on Disney’s remakes recently thanks to the Lion King disaster; however, Lady and The Tramp appears to actually be getting things spot on. It might just be a good template for future movies of this type.

That being said, it is still fairly mediocre. It’s a movie which is likely to appeal to younger children, and with the material smoothed out to such a general audience extent, it’s likely to be a pretty safe bet.

Visually, the movie is a little clunky in places – four or five years after the release of The Jungle Book, the animation on the dogs’ faces can seem odd in places, but it’s never enough to take you out of the story. It’s far more expressive than anything you’ll see in The Lion King (and I promise I won’t rip on that again in this review).

What impresses me most about Lady and The Tramp is the fact that it fulfils the brief. It doesn’t really do much more beyond its station, but do we really need it to? Some of the songs change, the story has a few tweaks, but otherwise, it’s still as entertaining as it ever was. The original is still hugely entertaining to this day – it’s amazingly charming and it’s one of my favourite Disney movies – and I’m happy to say that its 2019 remake lives up to a very big name. Have I regained any kind of faith in the Disney remake train? Wait until I review Mulan.

The best streaming services you can sign up for online

· *There are dozens of streaming services to choose from, all with varying content libraries, features, and price points.*
·..

How to get a free week of Disney Plus, Disney's ad-free streaming service

· *Disney Plus houses all the Pixar movies alongside a variety of brand-new movies and shorts made* *exclusively for..

All the new kids' shows you can watch on Disney Plus — from 'Vampirina' to the latest season of 'Star Wars: The Clone Wars'

Lady and the Tramp review: A refreshingly humble take on the Disney live-action remake