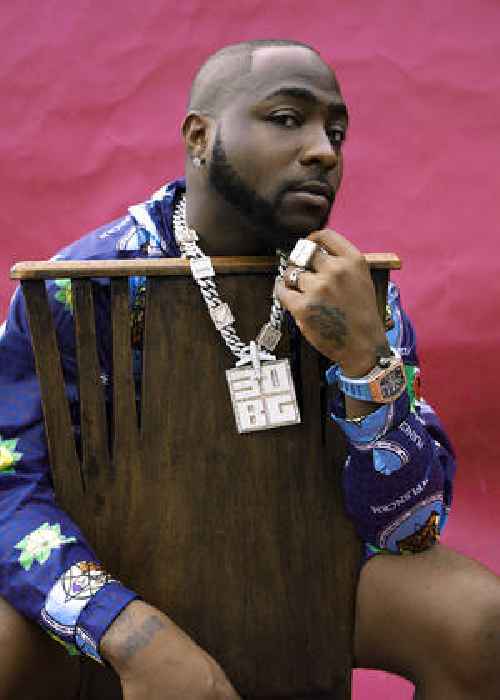 The Nigerian force is aiming for a better time...

Earlier this year, as COVID-19 restrictions lifted in Lagos, Nigeria, *Davido *retreated to the plush comforts of Los Angeles to continue work on a project that he had conceived at the beginning of the Lagos lockdown. One day, whilst on a studio run for the project and additional work on a proposed song for Hit-Boy’s album, Davido took a bathroom break and ran into none other than American rap icon, Nas. The 27-year-old Nigerian pop star is half-laughing when he describes their meeting.

“I am washing my hands, I look up and I see Nas, and I’m like, what?” he says. Nas, too, isn’t sure if he has the right person, so he asked his bathroom accomplice if he was Davido; pausing slightly, Davido adds insouciantly, “I answered, yeah.”

It is a powerful indication of how far contemporary Nigerian pop has come over the last ten year that Davido, one of the genre’s foremost avatars, is instantly recognised by one of the most celebrated rappers alive. For Davido, whose oldest brother used to drive him to school in Lagos while bumping Nas’ music in the early 2000s, it felt especially significant. That day in L.A., Davido and Nas made music together and Davido’s oldest brother was the first person he told about it.

But don’t chalk up Davido’s excitement to naivete, he’s used to the finest luxuries of life. Born David Adedeji Adeleke in Atlanta, Georgia, before relocating to Nigeria, he attended the British International School in Lagos, and at 16, was sent to the Oakwood University in Alabama to study Business Management. In Alabama, he got introduced to music-making gear courtesy of a dorm mate, making beats and instrumentals that marked his entrance into the music scene. Sometimes later, seduced by the growing appeal of Nigerian pop music, Davido dropped out of school to pursue his passion. He went AWOL for a bit and upon turning up back in Lagos made a deal with his father to finish school at a university in Osun state, northwest of Lagos, if his musical aspirations were supported.

Since then, his music career has blossomed, a series of singles released circa 2011/2012 including “Back When” and “Dami Duro” established him as a fixture on the scene, clearly becoming a part of a new generation of singers primed to capitalise on the success of progenitors like P’Square, 2Face, and Wande Coal. Talking to Rawiya Kameir of *The FADER in 2018*, Davido remembers his life undergoing a change after “Dami Duro”. “Everything just happened,” he told her. “I was being booked in, like, Botswana, all over Africa in under six months.”

From being an African superstar, he has expanded his reach to the world side-by-side with the rise of afrobeats, the amalgam of sonic styles used to refer to popular music from West Africa. Along with Burna Boy, Wizkid, and Tiwa Savage, he is looked at as one of Africa’s leading light musically and to close out the last decade, Davido released 'A Good Time' in November 2019, a record described by Pitchfork as “ buoyant” and “unsinkable.” In another interview with British GQ, Davido explained that the album’s motif was to show that “ it’s a good time to be African.” Smooth, groovy collaborations with stateside acts like Chris Brown, Popcaan, and Summer Walker prove that point.

“Sometimes you forget how you are being appreciated worldwide,” Davido admits candidly over a Zoom call months after the Nas meeting. It is, of course, a portent into another story, one of how he and Nicki Minaj collaborated on a song at the height of lockdown. He’d noticed that Nicki Minaj had followed him on Instagram and, after a night out in Nigeria’s capital city Abuja, DMed her with a uniquely Davido message: “Yo, Nicki I have a hit for us.”

“She was like, ‘Definitely,’” Davido continues, laughing. “I even thought she was going to tell me to hit her manager up or let the label work it out.”

Nicki Minaj insisted that he send her the song directly, Davido says, and less than 48 hours later, her vocals were sent back. 'Holy Ground', the euphoric song they worked together on sees both artists work around their strengths to create a seamless sonic experience that has Nicki rapping and singing in tandem with Davido’s gruffly yet toned emotiveness. That song will find a home on 'A Better Time', a quick-fire follow-up to 'A Good Time', Davido’s sophomore that came out seven years after his debut.

“I really recorded (a lot) during the whole lockdown period,” Davido admits. In sharp contrast to the extemporaneous recording style for 'A Good Time', he was in a settled zone to create this record. “I would say I had more time to work on it because I wasn't really doing shows, everywhere was closed. Unlike 'A Good Time' where everywhere was open. I was doing shows at the time, I was on the road. I was in America most of the time I was recording 'A Good Time', because I was busy handling stuff for my label so I had to record the album mostly like emailing my producers that were down here but 'A Better Time', I was on the ground, in Nigeria, with nothing to do but record. We put a lot of concentration on the project.”

The result of the extended time working on the album is a project that is deeply steeped in African tunes – with appearances from Sauti Sol, Tiwa Savage, and Mayorkun – while embracing afrobeats’ international profile on collaborations with acts like Lil Baby, Young Thug, and, again, Chris Brown. Davido, however, makes it a point to explain that none of this was planned. “When I record a project, I don't plan it. I’m not like this album is going to be more American-influenced or otherwise. I just record and if the best songs that I recorded are with artists overseas then so be it, if it is the other way round, then so be it. There are no real criteria, it is just how I recorded it and how the songs were chosen.”

Originally meant to be released in October, 'A Better Time' has since been pushed back in respect to the protests against police brutality that have rocked Nigeria since the second week in October. Young people living in cities across the most populous Black country in the world have come out to demand the federal government disbands the Federal Special Anti-Robbery Squad, a police unit accused of extortion, unlawful arrests, and extrajudicial killing, as well as broader police reforms.

Days before we speak, Davido attended a meeting with the chief of police in Nigeria to explain protesters’ demands but he still feels hurt about the entire situation. “A lot of people are tense right now, even I am tense, I am angry,” he says, sounding disconsolate at the government’s response to the protests.

At protests ground across the country, his latest song, 'FEM', has become a radical addition to the Nigerian protest music canon, galvanizing youths because of the irreverent lyrics of the song and its defiant messaging that have been re-interpreted as scathing critiques of the government.

“I can't even lie, it makes me feel so good,” he says about the unexpected development. “Not to be selfish and make the whole thing about me, but at the same time, it is about me because I am Nigerian, my family is Nigerian, my fans are Nigerian. You know it is just special to me, all of us that need to fight this together. It is a difficult time for us Nigerians and just to see that my music is being used as a tool to fight for freedom is unexplainable.”

“It is just important that we all came together and we were heard,” he goes on. “This is the first time, in my generation, that we went to the streets and we actually got a response. We shook these people and we have actually gotten a response.” He is quick to warn that the protests against police brutality are by no means an end to the problems affecting Nigerians. “I just feel like there are so many other problems in the country and this is just the beginning,” he says. “Respond to this first, act on this quickly, so whenever we come out and say, “End this,” and you tell us, “Give us time,” we would believe you.”

Ultimately, he knows his job as a musician is to provide entertainment to the people and he’s ready to deliver, with 'A Better Time' now nailed on for a November 13th release date – “Hopefully, we can get people happy and back to work.”

As our interview comes to an end, I ask Davido if he thinks the project will solidify his legacy as one of the most important African acts of all time, he briefly considers the question before responding matter-of-factly, “I think we’ve passed that level, 'A Better Time' is just going to further assure it indisputably.”