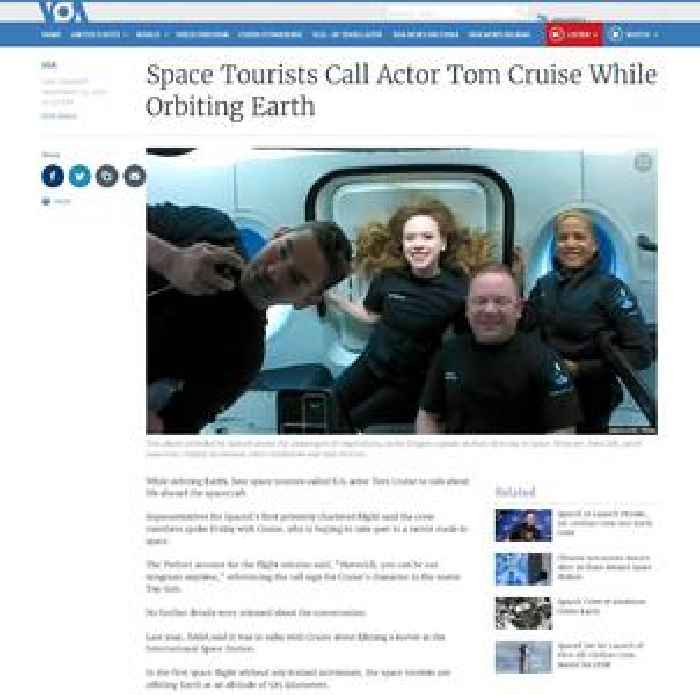 While orbiting Earth, four space tourists called U.S. actor Tom Cruise to talk about life aboard the spacecraft. Representatives for SpaceX's first privately chartered flight said the crew members spoke Friday with Cruise, who is hoping to take part in a movie made in space. The Twitter account for the flight mission said, "Maverick, you can be our wingman anytime," referencing the call sign for Cruise's character in the movie Top Gun. No further details were released about the conversation. Last year, NASA said it was in talks with Cruise about filming a movie at the International Space Station. In the first space flight without any trained astronauts, the space tourists are orbiting Earth at an altitude of 585 kilometers. The crew is led by billionaire Jared Isaacman, 38, and includes two contest winners and a hospital worker. Crew members spoke with mission control Friday in a 10-minute live webcast. Hayley Arceneaux, a 29-year-old physician assistant at St. Jude Children's Research Hospital, showed off her ability to do flips in zero gravity. Arceneaux, a childhood cancer survivor, had spoken earlier with child cancer patients at St. Jude. Chris Sembroski a 42-year-old U.S. Air Force veteran, played his ukulele while Sian Proctor, a 51-year-old community college teacher, showed a picture she drew of SpaceX's Dragon capsule. The flight, named Inspiration4, took off Wednesday and is due to splash down Saturday in the Atlantic Ocean off the coast of Florida. SpaceX was founded by billionaire Elon Musk, who tweeted Thursday, "Missions like Inspiration4 help advance spaceflight to enable ultimately anyone to go to orbit & beyond."

Four space tourists orbiting the Earth in a SpaceX capsule at 17,500 miles per hour..