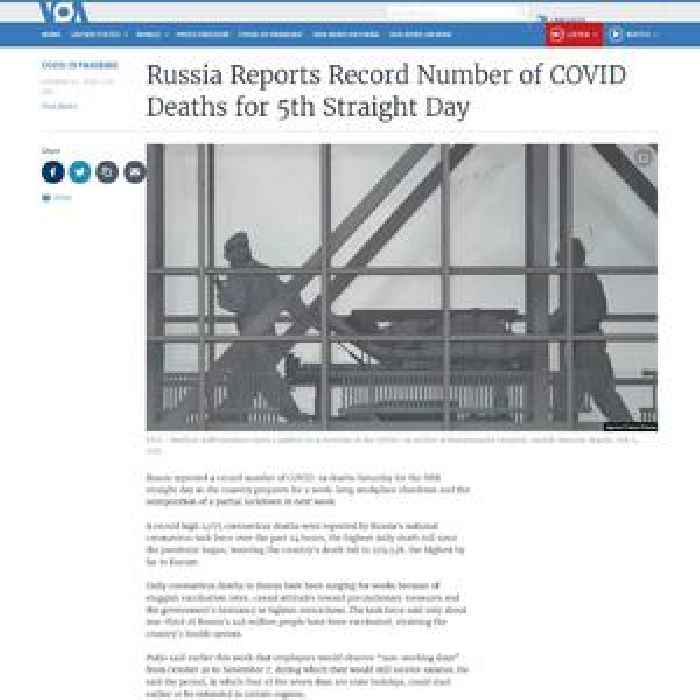 Russia reported a record number of COVID-19 deaths Saturday for the fifth straight day as the country prepares for a week-long workplace shutdown and the reimposition of a partial lockdown in next week. A record high 1,075 coronavirus deaths were reported by Russia’s national coronavirus task force over the past 24 hours, the highest daily death toll since the pandemic began, boosting the country’s death toll to 229,528, the highest by far in Europe. Daily coronavirus deaths in Russia have been surging for weeks because of sluggish vaccination rates, casual attitudes toward precautionary measures and the government’s hesitancy to tighten restrictions. The task force said only about one-third of Russia's 146 million people have been vaccinated, straining the country's health system. Putin said earlier this week that employees would observe “non-working days” from October 30 to November 7, during which they would still receive salaries. He said the period, in which four of the seven days are state holidays, could start earlier or be extended in certain regions. The rollout of Russia's Sputnik V COVID-19 vaccine in Namibia was postponed Saturday by the country’s health ministry after the vaccine’s regulator in neighboring South Africa raised concerns about its safety for people at risk of HIV. The regulator said it would not approve an emergency use application for the vaccine at this time because some studies suggest that the delivery system known as a vector used to inoculate people with the Sputnik V vaccine can cause men to be more susceptible to HIV. The vaccine’s manufacturer, Gamaleya Research Institute, said Namibia's postponement was not based on scientific evidence. U.S. Food and Drug Administration scientists said Friday the risks of inoculating children 5 to 11 years old against COVID-19 are far less than the risk of rare cases of heart inflammation, called myocarditis. The announcement comes as a panel of outside experts is expected to vote on Tuesday whether to recommend FDA approval of the vaccine for the young age group. If the agency authorizes emergency immunization, the shots could be available in the United States in early November. The Centers for Disease Control and Prevention’s independent advisory committee takes up the issue on November 2 and 3. U.S. pharmaceutical company Pfizer and its German partner, BioNTech, on Friday released data showing their COVID-19 vaccine is safe and 90.7% effective at preventing symptomatic infections in children 5 to 11 years old. Pfizer said the trial was conducted among 2,268 children between the ages of 5 and 11 who were given two shots of a 10-microgram dose of the vaccine, a third of the dose given to those 12 and older. In anticipation of the emergency approval, the White House this week announced plans to deliver enough of the children’s doses of the vaccine to all 28 million children between the ages of 5 and 11 currently living in the U.S. Meanwhile in Britain, government scientific adviser Stephen Reicher warned Saturday that the country was "dilly-dallying into lockdown" and called for stronger measures to curb the spread of COVID-19, as the rate of new infections continued to mount.  His warning came one day after British Prime Minister Boris Johnson continued to dismiss calls for renewed COVID-19 restrictions, saying there is nothing to indicate those moves will be necessary in the coming months, despite the fact Britain is currently seeing a dramatic surge in COVID-19 infections. Speaking to reporters while touring a London vaccination facility, Johnson said the current surge in infections is high, but still within the parameters experts predicted. Johnson encouraged people to get vaccinated if they had not already done so, and for those eligible to get a booster vaccination. The British government has approved booster shots for everyone over 50. With an average of more than 47,000 infections daily, up 18% from the previous week, the World Health Organization reported Friday week that Britain has among the highest number of daily new infections in Europe, the only part of the world that saw an increase in new cases last week. Some information for this report came from the Associated Press, Reuters and Agence France-Presse.

$5 Gas Could Become More Common as Prices Hit Another Record

$5 Gas Could Become More Common , as Prices Hit Another Record.
According to AAA, on May 17, the national average for regular..

World Health Organization chief Tedros Adhanom Ghebreyesus said Thursday the leaders of the G-20 nations have the ability to end..