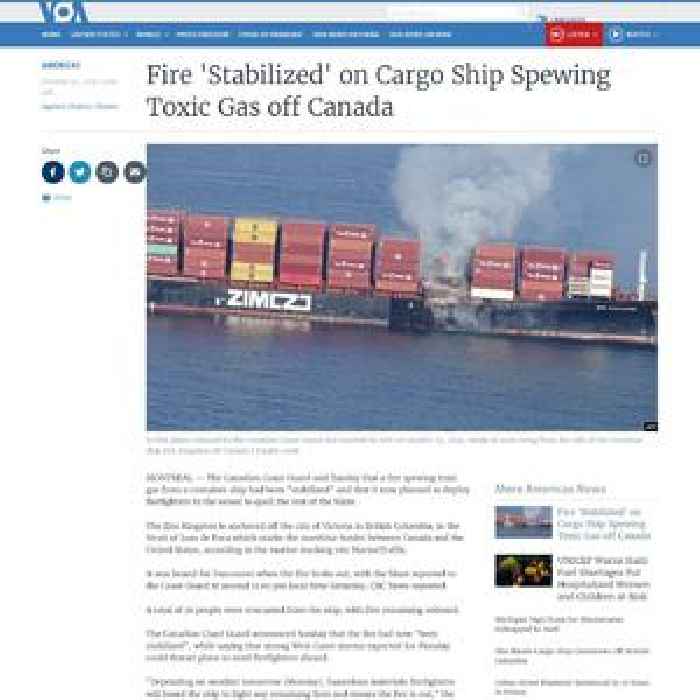 The Canadian Coast Guard said Sunday that a fire spewing toxic gas from a container ship had been "stabilized" and that it now planned to deploy firefighters to the vessel to quell the rest of the blaze.  The Zim Kingston is anchored off the city of Victoria in British Columbia, in the Strait of Juan de Fuca which marks the maritime border between Canada and the United States, according to the marine tracking site MarineTraffic.    It was bound for Vancouver when the fire broke out, with the blaze reported to the Coast Guard at around 11:00 pm local time Saturday, CBC News reported.  A total of 16 people were evacuated from the ship, with five remaining onboard.    The Canadian Coast Guard announced Sunday that the fire had now "been stabilized", while saying that strong West Coast storms expected for Monday could thwart plans to send firefighters aboard.    "Depending on weather tomorrow (Monday), hazardous materials firefighters will board the ship to fight any remaining fires and ensure the fire is out," the Coast Guard said.  Accounts vary as to the extent of the fire, with the Coast saying the blaze "broke out in ten containers" while the vessel's Cypriot owner, Danos Shipping, saying it occurred in two.    Despite the "toxic gas" that the Coast Guard said was emanating from the ship, there was no current risk to people on the shore, it insisted.    The fire was caused by "excessive listing due to extreme weather," Danos has said, adding that no injuries were reported.    The firm said it was sending claims adjusters on board "to ensure that conditions are appropriate for the safe return of the vessel's crew."  Emergency tow vessels, tugs and the Canadian Coast Guard were set to monitor the ship overnight to ensure that it remains secured.    Although the ship did not present an immediate risk to land, such as an oil spill or toxic tide, teams were set to continue to monitor the situation, particularly in light of the strong gales that are expected.  To extinguish the fire, a tugboat had sprayed cold water on the hull, the Coast Guard said, explaining that "due to the nature of chemicals onboard the container ship, applying water directly to the fire is not an option."    According to Radio-Canada, 40 containers were lost in the Pacific Ocean during the incident, with the Canadian Coast Guard and its American counterpart working together to recover them.  The container ship is carrying more than 52 tons of chemicals, the broadcaster said.

A container ship has caught fire and is expelling toxic gas off Canada's Pacific coast, authorities have said.

"The ship is on fire and expelling toxic gas," the Canadian Coast Guard said of the Zim Kingston, warning other vessels to steer..