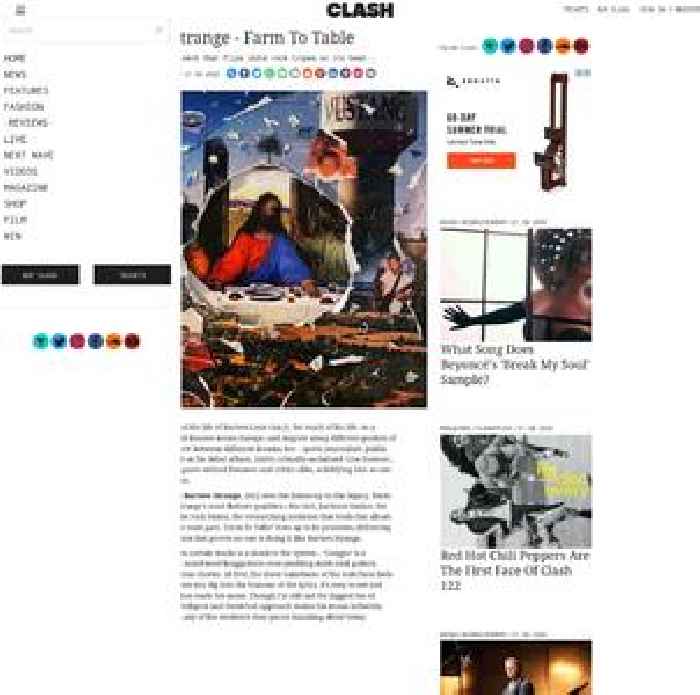 A genreless experiment that flips indie rock tropes on its head...

Fluidity has permeated the life of Bartees Leon Cox Jr. for much of his life. As a military brat, he would bounce across Europe, and migrate along different pockets of America. He would flow between different dreams, too – sports journalism, public communications. And on his debut album, 2020’s critically-acclaimed 'Live Forever', his fluid approach to genre enticed listeners and critics alike, solidifying him as one to watch in indie music.

Under his stage name *Bartees Strange*, 2022 sees the follow-up to this legacy. 'Farm To Table' continues Strange’s most distinct qualities – his rich, baritone timbre, the haphazard mix of indie rock fusion, the overarching ambition that lends this album its grandiosity. For the most part, 'Farm To Table' lives up to its promises, delivering a truly individual album that proves no one is doing it like Bartees Strange.

Admittedly, listening to certain tracks is a shock to the system – ‘Cosigns’ is a disorienting fusion of AutoTuned braggadocio over plodding math rock guitars, imploding into its riotous chorus. At first, the sheer nakedness of the AutoTune feels like a gimmick, but once you dig into the humour of the lyrics, it’s easy to see just how Bartees Strange has made his name. Though I’m still not the biggest fan of ‘Cosigns’, Strange’s intelligent and theatrical approach makes his music infinitely more refreshing than any of the mediocre four-pieces knocking about today.

'Farm To Table' also considers what forces have shaped Strange’s life, and for Strange, tour life mirrors the ghosts of his childhood. On ‘Tours’, his voice shines through an intimate acoustic guitar, recalling the toll travelling took on his family and putting himself in their shoes: "If I were my father/I’d wonder who’s checking for monsters?".

‘Heavy Heart’, meanwhile, encapsulates the best of Strange’s arrangement abilities with a rushing, dreamy instrumental as he laments on his reliance to his own ‘heavy heart’. Occasionally, the point is laboured; ‘Black Gold’ is another muted track dealing with Strange’s loneliness that doesn’t add too much to say about the topic.

Moving through the world as a Black man has also impacted how Strange operates; on this record, he delves deeper into Black issues. ‘Hold The Line’, arguably the best song on the album, was inspired by George Floyd’s sister, mixing gospel vocal stylings with sombre guitars and a soft hint of organs. "What happened to that man with the big ol’ smile?", Strange mourns. Album closer ‘Hennessy’ is another heartbreaking reflection of Strange’s position in a musical sphere dominated by white people. Here, he juggles his confidence with his fears of being shot, or misunderstood by the people he aspired to sit at the table with.

It’s not a perfect album by any means – I’m still torn on ‘Wretched’, whose anthemic chorus seems a little too eager to please, and ‘Cosigns’ is a little too spartan in its production. Nevertheless, it takes a wealth of creativity and guts to make an album as individual as this. Much like its title, Strange offers himself up to the world, presenting the second world in his ever-expanding universe. All we have to do is take it.

Bartees Strange explores his journey from 'Farm to Table'

In an interview with Morning Edition's Leila Fadel, the fast-rising artist talks about a life path as winding and varied as his..