This is a film that is fairly rare in that it divided opinion before it even reached theaters. The concept of a Batman/Superman mashup movie was almost too much to bear for those of us with more than a passing interest in DC Comics, and with the promise that it would be a springboard towards a DC cinematic universe – to finally bring it up to speed with Marvel – what could possibly go wrong? For many people, the casting. Ben Affleck as Batman caused a fair stir amongst fans and critics alike – perhaps too many remembering his turn in Gigli, one of the worst-rated movies of all time, as opposed to his award-winning on-and-off camera turn in Argo – as did Jesse Eisenberg as Lex Luthor. While Henry Cavill has divided people of whether or not he is the best Superman for the job, he has mostly received fair praise – but the problems facing Batman V Superman are not so much in its casting, but elsewhere.

Following on from the events of Man of Steel, in which Superman left the cities of Metropolis and Gotham amid wanton destruction due to an intense battle with Kryptonian villain General Zod, Bruce Wayne takes it upon himself to blame Superman for the mass casualties incurred – and, in turn, Superman begins to feel deep unease about the continued work of Batman in Gotham City, fearing him a force for chaos as opposed to a force for good. From here, the eccentric and conniving Lex Luthor involves himself in trying to experiment with the remains of General Zod, which leads our duo in a merry race against each other to gain the upper hand of morality. Going into any more of the plot will, in effect, spoil the last 30 minutes of the movie’s runtime. 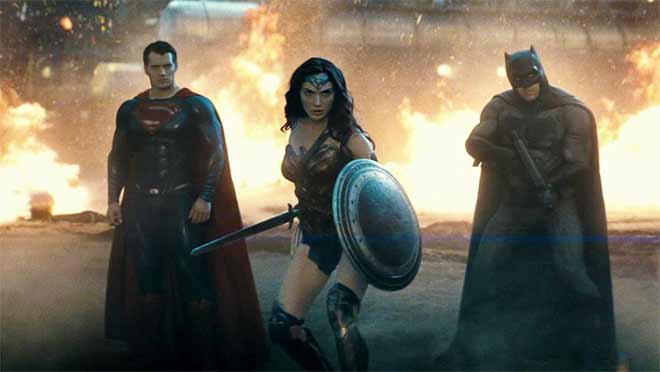 This is where the crux of BVS’ problems lie, but let’s begin with the positives. For DC fans, there are a ton of teasers, knowing moments and pieces of fan service that will delight anyone awaiting the Justice League movie, which this film is of course building up to. The action scenes are fantastic – they are generally well-timed, well-shot, and Hans Zimmer and Junkie XL’s genius partnership really help hammer home a lot of the more dramatic moments that the movie has to offer. For the most part, the acting is generally fine. Fear not, anyone that is concerned about Ben Affleck – he does fine as Bruce Wayne and as Batman, perhaps even offering a darker knight than we have experienced from even Christian Bale of late. Cavill is as good a Superman as we will get – and Gal Gadot is impressive and scene-stealing as Wonder Woman (aka Diana Prince). Jeremy Irons, however, is perhaps the most underrated piece of casting, offering a disgruntled but efficient and resourceful Alfred that I personally feel Michael Caine never quite did justice. Here, Alfred is more than a butler – he’s Bruce Wayne’s mission control. The partnership works great.

Jesse Eisenberg, however, is infuriating as the snivelling and twee Lex Luthor, offering a rather wet and cringeworthy turn as one of the all-time iconic comic villains. Luthor comes off as irritating as opposed to imposing, with Affleck giving away more genuine malice than Eisenberg could ever hope to. This isn’t a slight on Affleck, either – as he is genuinely and effectively malicious in many scenes.

However, this is sadly where the good commentary has to end. Much of the fantastic content – the action, the tying together of storylines, the teasers – take place very late on into the story, with at least an hour and a half of morose, nihilistic moping dragging us along for the ride. Unlike the comedic touches and moments of clarity that the Marvel universe has offered us, BVS remains entombed in a murky blue mope for most of its run-time, offering little other than moody, brooding discussions between characters along the way. The plot is so convoluted and hard to follow that it’s impossible to remain steadily entertained throughout the early stages of the script. Dream sequences and side plots and plans and all other manner of twists emerge, and they’re exacted in such a low-tone and morose manner that I’m still not entirely sure what happened ahead of the final 30 minutes of action.

This is what lets BVS down. With a great cast and some genuinely great action direction from Snyder (who did great work adapting Watchmen), the movie’s bland and meandering script never really allow our characters to become more than what they tell us they are, moping along in a fashion that made many of the people attending the screen I saw the movie in choose to start turning on their phones and removing their 3D glasses. The abysmal pacing and plodding script have allowed for a genuine misfire to occur – which, under different writers, different direction and with a different focus – as it feels clear upon watching that this is a filler movie between Man of Steel and Justice League – could have brought us a truly fantastic comic book movie that might have stood proud amongst its Marvel contemporaries. Instead, we have a middling and altogether pretty boring movie that only really starts hitting the right notes when it’s far too late.

In short, the good bits are worth seeing – but I’m not sure it’s entirely worth sitting through almost two hours of some of the most morose screenplay I have ever seen put to the big screen. I’ll be interested to see what DC do next, but if this is a taste of things to come, count me out.

Is THIS The Director You're Looking For? Star Wars Episode IX Hires A Familiar Face

Are The Cinematic Universe's Days Numbered?