MOVIE REVIEW: A Hologram For The King

MOVIE REVIEW: A Hologram For The King


A HOLOGRAM FOR THE KING

‘Fish out of water’ stories aren’t exactly as ten-a-penny as they once may have been at the cinema – with Sofia Coppola’s Lost in Translation being the most memorable example in recent years – and, when done well, they can be humorous, touching or even inspiring. When handled badly, however, they can appear glib, poorly planned or even tedious. Sadly, despite having enormous star power in Tom Hanks, Hologram falls into the latter category for reasons beyond its script and underlying messages.

Alan Clay (Hanks) is a businessman on a mission – to sell IT and hologram technology to Saudi royalty – and with his journey comes a whole host of cultural clashes and misunderstandings, in addition to the divorcing father-of-one’s self-discovery and health concerns. This is a movie with a very basic plot and an even simpler premise – as it sees a man from one culture try to make his way in another with varying successes. Clay finds himself struggling with closing a business deal, coping with local humour, and even negotiating the medical system – where he meets a doctor who changes his life for good. 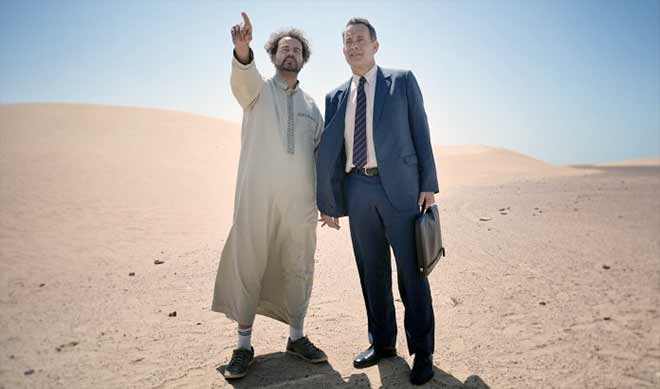 A Hologram For The King is certainly a movie with a lot of heart, and a lot of intention – this much is clear – and Hanks is Hanks, offering an amiable everyman that the audience will likely use as their avatar in the sands and cities of Saudi Arabia – but, largely, it is his gravitas that helps the picture along so much. Under an actor with less experience or with less command, Hologram would have suffered in a big way. As it stands, however – even with Hanks at the forefront – it is a movie that is by no means as well-made as it likes to believe.

Hologram’s main problems stem from its tone, its focus and its narrative – as all three meander constantly, giving the audience very little to anchor themselves with. We are thrown into Clay’s life and work with very little to work with – we don’t learn more about his life and what makes him tick until we see a number of throwaway flashbacks that scatter themselves amongst the main story. These flashbacks are ripe for drama, yet are sadly mistimed and given no second thought. Instead, the movie focuses mainly upon Hanks attempting to seal a deal with Saudi royalty in an effort for his company to score a huge new client. This would be all well and good, were the delivery of the plot not so worryingly tedious.

Exposition in this movie is at some of the highest I’ve seen in a picture this year – and while fast pacing and artistic shots try to relay a sense of ‘show’ over ‘tell’, it is often down to the characters to tell us everything we need to know – and even then, many scenes add little to the action or drama, perhaps leading us to wonder why they were left in there for the final cut. The characters, too, alongside Alan Clay, are poorly-realised and merely read lines from the script. It’s all very unnatural, and extremely forced. From even the earliest scenes in this movie onwards, I could tell that I would be in for a movie that would tell me what I was seeing as opposed to experiencing it for myself.

Hologram is also a movie that tries to be funny – but despite Hanks’ genuine charm and delivery of the lightweight script – it seems to wallow in the delivery, mistiming the cues and leaving very awkward silences in their stead. This is both a mixture of scriptwriting and acting problems that only add to the nightmare that this film appears to be having from very early on.

A Hologram For The King - Official Trailer (Lionsgate)

Alan Clay is not a difficult man to like – but his journey is so mundane and lacking in genuine conflict that we as an audience are left scrambling for moments to find entertainment in. Hologram struggles with tone throughout – offering trippy moments of fantasy that are never explored again at the most inopportune moments – attempting humour in unexpected but poorly-delivered places – and attempting to create genuine concern for the plight of the main character. However, it is difficult to do so with so little investment in Clay’s life from the start – the little we do know is assumed, and even from there, any chance of genuine drama is nixed off the bat with bizarre, mundane storytelling that genuinely made me wondered if I had missed anything. Having looked at critical consensus elsewhere, it certainly seems I hadn’t – though many reviewers have been much, much kinder than I in this scenario.

Hologram builds up what little tension it can towards an astonishingly flat finale, marked by flighty scenes that would not have gone amiss in Coppola’s Lost in Translation – but ultimately finished by a Hanks voiceover. A voiceover or piece of written text to finish a movie is all well and good if a true story has been told and we want to know what happened to the real people that inspired the characters – but in this case, it smacks of lazy writing, condensing potentially dramatic scenes that could have been played out by the perfectly capable cast into a two-minute monologue that seems eager to finish the movie while it still can.

On top of the issues Hologram experiences, it’s also incredibly reliant upon product placement. Beverage brands, fast food, coffee outlets and car manufacturers are all given their moment in the sun – and while advertising on film can be done subtly – if at all – such moments in Hologram are highlighted to all as if being given as a punchline. In a movie that operates on a relatively thin plot and premise, product placement sticks out a mile – and it left an excruciatingly bad taste in my mouth, particularly considering that this, too, was ultimately a movie about making business deals.

There is clearly a passion behind Hologram that will not go wasted on some viewers, certainly those who will like a movie enough for Tom Hanks’ likeable performance – but it is passion that is so poorly communicated and realised when put to film that I am left wondering how good the picture could have been with more love given to the characters, and more credit given to the audience. As such, it is an extremely forgettable movie that is all the more disappointing for the simple, intriguing premise that it offers. Instead, I would seriously recommend attending Florence Foster Jenkins while you still can if you are looking for genuine drama and gentle humour during May.

Orion Lee’s Secret to Becoming a Leading Man in ‘First Cow': Take It One Scene at a Time

Diane Warren’s Pandemic: Hanging With Legends and Hoping for Oscar

One Night in Miami on Amazon Prime Video - Official Trailer

Check out the official trailer for the Amazon Prime Video drama movie One Night in Miami, directed by Regina King. It stars..

Sleeping With Those Great Books – OpEd

Coolie, No 1 Movie Review: Coolie, No!