ALICE THROUGH THE LOOKING GLASS

Tim Burton’s 2010 take on Lewis Carroll’s Alice in Wonderland was not only ideally suited to his unique style of direction and pacing, but it was also a chance to show a darker, more ‘alternative; side to Disney. As it transpired, it was an adaptation that was extremely polarising – critics were never too sure on whether it actually worked or not, with many people critical of the dark twists and heightened emphasis upon Johnny Depp’s Mad Hatter character. I, for one, was among the dissenters, having found the plot convoluted and characters hard to connect with. Granted, it’s a movie full of Carroll characters – all brilliantly weird – but there’s weird, and then there’s weird for weird’s sake. While Alice Through The Looking Glass is perhaps a little more focused under a different director’s guidance – and with Burton operating as a producer – it walks a tightrope between being reasonably entertaining and somewhat flawed. 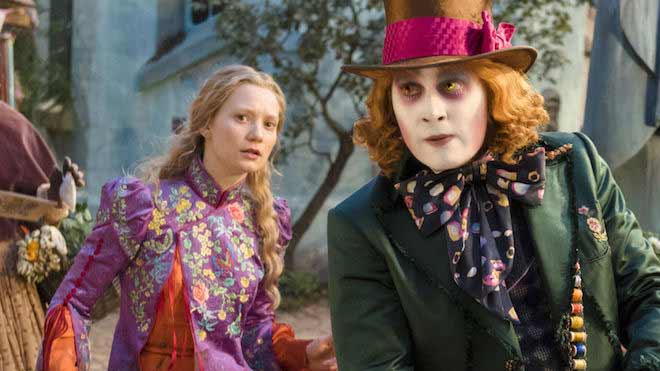 Looking Glass picks up as Alice Kingsleigh – now the captain of her father’s boat – returns from a treacherous voyage to find that she is faced with signing her vessel, The Wonder, over to her obnoxious ex husband-to-be. In the midst of such drama, she finds herself returning to Underland through a mirror, and reuniting with her old friends – the Cheshire Cat, the White Rabbit, the Dormouse et al – discovering that the Mad Hatter has taken to solitude after being reminded of his family’s supposed death. The Hatter himself believes that his family is still very much alive – and Alice seeks to look into the matter personally. This, however, will involve strategic time travel, and will require negotiating with Time himself – who is just as fastidious and irritable as you’d expect him to be.

As a whole, Looking Glass has a well-realised story, incredible visual appeal and a number of genuinely thought-provoking moments. There is dedication to character development particularly in terms of the White and Red Queens which do well to let us know exactly why they are how they are – and there’s a particularly nice tie-up to their story amidst unfortunately predictable final scenes. The cast is mostly great, seemingly relishing their roles – Sacha Baron Cohen is absolutely perfect as the faux-German Time, a stuffy and obsessive watcher of souls who finds his world go out of the window once Alice finds her way into his domain. He brings humour and plot propulsion without it being particularly clunky or unnecessary – and, refreshingly, while he is painted as an antagonist early on, he is not treated as an out-and-out villain. There are amusing scenes between Baron Cohen, Depp’s Hatter, Paul Whitehouse’s March Hare and Barbara Windsor’s Dormouse that help break up the action.

As a side, Wasikowska still doesn’t feel particularly right for Alice, as there are moments where heightened emotion, be it grief, fear or even determination may have been handled more vividly under a different actor. Wasikowska is a fine actor – but she doesn’t particularly sell us the best Alice we could have gotten. Hathaway, similarly, still doesn’t feel quite right as the White Queen. The voice cast, to their credit, work well at bringing their old characters back to life. Depp, however, positively meanders waywardly as the Hatter, never quite offering the same level of quirkiness and whimsy the same way twice, while coming off rather sullen and petulant even in his brighter moments.

Cast aside, this is an incredibly complex movie – the moment you introduce time travel, it can be hard to keep an audience on track (though Back To the Future, of course, is the prime example that everyone tries to follow in times of doubt). As a result of so many returning characters coupled with a complex storyline and pacing that doesn’t really give us much chance to breathe, Looking Glass may perhaps lose a few viewers along its way to making solid entertainment. You don’t have to be a genius or understand time travel mechanics to enjoy the movie – far from it, as it tries to tread as softly as it can – but there’s often far too much going on for any of it to be considered a complete product. Too many characters as a result are underused, some chances for genuine drama or intrigue are missed, and it sadly remains somewhat predictable.

These points aside – which many critics have already picked up on – Looking Glass is still pleasantly entertaining. While the tone and message still insist upon their whimsy – whether the audience will find genuine wonder or not – this is still a story that has enough going on and plenty of interesting, if not cliched turns to entertain even the most skeptical among us. While the pacing may lose some viewers along the way, it remains focused and resolute enough to make the most of its time, perhaps even losing out on an extended runtime to offer us more of a chance to get behind the Hatter’s cause and to feel more for the characters on screen. As such, with so much going on and so many characters forming an ensemble that really isn’t used too often, we only ever really connect with Alice, with Time, and with the Red Queen – revelations regarding the latter’s past are, in my opinion, satisfying – but we’re not given much reason to root for the Hatter beyond the fact that he used to be full of whimsy and now he’s not. It’s this lack of character focus, and more upon the pathos of the situation and the complexities of time travel that prevent Looking Glass from being an extremely satisfying movie. As such, it straddles a line that’s perfectly entertaining but has misfired on much potential.

Alice Through The Looking Glass was Alan Rickman’s last film, and is respectfully dedicated to him. Rickman passed away after battling cancer earlier this year, and his unique screen presence and delivery will be greatly missed throughout the years and decades to come.

Caleb Landry Jones’ Brother Told Him to Take ‘The Outpost’ Role: ‘You’re Doing This One’

A version of this story about Caleb Landry Jones first appeared in the Race Begins issue of TheWrap’s awards..

How ‘Greyhound’ VFX Team Built a CGI Ocean and 1,500 Digital Shots From Scratch in 4 Months (Video)