Anyone with a passing interest in the Ghostbusters franchise will know that the intention to make a second sequel to the smash hit 1980s comedy was always being thrashed out behind the scenes, largely with stars Dan Aykroyd and Harold Ramis at the helm of such talks – but sadly, following the passing of Ramis, such plans never came to fruition. Indeed, the closest that fans came to seeing a third movie with the majority of the cast intact was via a videogame some years back, which was set after the second movie took place. In any case, even twenty years on, Ghostbusters is still regarded as something of an iconic piece of cinema history. 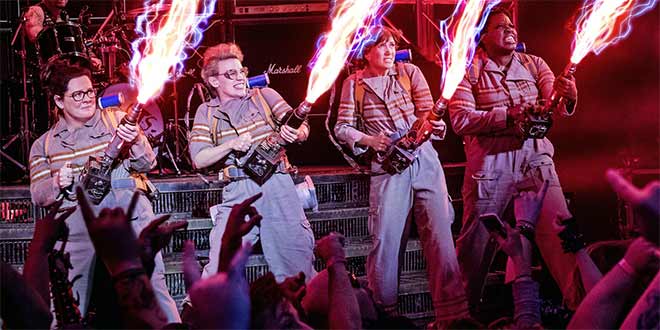 The 2016 ‘reboot’ of Ghostbusters needs to be taken on as neutral a level as possible if we are to critique it as a film in its own regard. This is a movie that has divided opinion and fuelled an outright backlash online for a number of reasons before it even reached cinemas – making it one of the most-discussed pictures of the year, for better or for worse – but it has arguably kept itself in the spotlight regardless of the press it has received. The biggest question arising from the publicity, however, remains solid – is it actually worth watching? For a number of reasons on a film-making level – and in terms of sheer entertainment – it is severely lacking, and as a result, has made for one of the year’s more disappointing viewings.

Ghostbusters 2016 ushers in a new team of spectre-fighting scientists – led by Wiig, McCarthy and McKinnon – as they start to investigate paranormal activity in Manhattan after a number of unexplained occurrences throughout the city that point towards the presence of ghosts causing havoc. As the team hire subway guard Jones and a goofy Hemsworth as receptionist, the team find themselves up against more than they bargained for when it appears that the ghouls are linked to a strange individual in downtown Manhattan – causing the crew to develop their technology and fight back against the threat and local perception that they are fabricating their enterprise.

Anyone watching this movie will automatically begin comparing it to the original – it is hard not to – but even as a screenplay on its own, it is severely lacking in a number of solid components that could help it succeed as a sci fi comedy in its own right. Many of the problems the movie experiences relate directly to the script – while it may benefit from a cast who have shown their acting chops and comedic ability elsewhere – it lumbers along for two thirds of the movie spawning jokes that rarely connect.

There are jokes that fail to connect entirely due to how they are approached – ones which seem to beg the viewer to appreciate them. Such jokes include Hemsworth’s dog being called ‘Mike Hat’, which the team mis-hear as ‘my cat’. It is less a joke and more of a throwaway character quirk, yet it is given centre stage as a line which demands laughter. Sadly, the movie seems to trundle along through mires of off-target jokes and occasionally flimsy delivery that will likely make you cringe more than laugh. Certainly, some critics have noted that it is goofy fun in places – but it is clear that it is trying desperately hard to be goofy fun. It pauses and waits for laughter, before firing four or more awkward, good-on-paper lines that could have benefited from a little more polish before making it to camera.

The movie’s main problem lies within its pacing and its balance between comedy and lore. Ghostbusters, whichever way you look at it and whichever adaptation you discuss, is a movie with a fantastic set-up, story world and with great opportunities for action – but it needs a fine balance to exist between comedy and plot for it to achieve its goals. The original movie – returning again to the source – was so memorable because people to this day still aren’t sure whether to call it an outright comedy, sci-fi, or even horror – while 2016’s Ghostbusters is largely a fairly typical modern comedy that feels as though it has been dressed in the franchise’s clothing – it doesn’t fit too well, and it feels largely as if the cast are dutifully moving through the motions just to get to the end. We don’t connect particularly well with many of the characters as they are either written to be over-obnoxious or disappointingly lightweight. I’ve noted that some critics praise Hemsworth’s portrayal of the dizzy receptionist – his lines are so awkward, and so forced, that I genuinely struggled to latch onto this character regardless of his delivery.

This all being said, the movie does pick up when we get some reasonably entertaining action scenes towards the last quarter of the runtime. Such scenes could have been more effective with better character development or less emphasis on comedy early on, as the one thing that the movie has going for it is that it does seem to get where it’s going when dealing with the more serious elements of the plot – if in a roundabout way. This is a movie, to me, that is ultimately a few rewrites away from being a fairly reasonable take on Ghostbusters. In its chosen form, however, it feels ingratiating and poorly-paced, with far too much emphasis on a lightweight comic script as opposed to the lore and possibilities that it could have monopolised upon. Fans of the original Ghostbusters need not apply (original cast members make cameos that are fairly throwaway), but I find it hard to see how this movie could inspire a whole new legion of supporters. While it is visually impressive in places, and scenes of genuine action and ghost busting are fairly entertaining, this is a re-imagining that fails to stand up on its own two feet, regardless of the franchise it is aiming to expand upon.

Is a Third Bill and Ted Movie Ever Going to Happen? The Stars Weigh In

Is the Fresh 'Princess' of Bel Air Happening?

by Graham Pierrepoint -
Of all of the reboots and remakes to have surfaced in the past few years, there’s perhaps none..

Top Gun 2 Is Happening - Sooner Than You Think