The most enjoyable movies, for me at least, are the ones that stay with you – the ones that reverberate on you for days afterwards, the ones which make you feel like the journey was worth it. Some movies are built to be funny, some are built to simply pass the time – others try to send a message, while others even further like to play with the audience. Whatever any of us went in expecting from Arrival this November, we certainly didn’t get it. Arrival combines the latter two types of movie I mentioned – and does so better than any film I’ve watched so far this year. 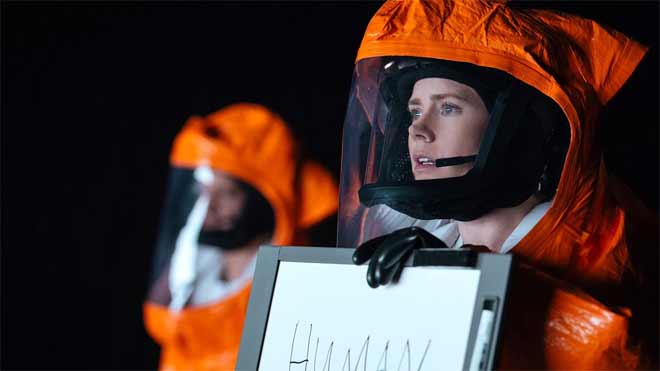 Amy Adams is language expert Dr Louise Banks – a brilliant linguist and, as we are shown, someone with an incredible emotional weight around her neck – and she finds herself drafted in to help the US military with a curious occurrence. Out of nowhere, twelve colossal black discs have descended to just above the Earth’s surface, scattered around the globe, and each disc (or ‘shell’, as they are termed) are to be investigated by the governing powers whose backyards have been disturbed. Dr Banks joins with scientist Dr Ian Donnelly (Renner) and Colonel Weber (Whitaker) to venture into a shell which has appeared in Montana, US – in an effort to try and find out exactly why the objects have materialised, and why the life forms controlling the crafts have arrived. From here, as the aliens’ language is studied and decoded, an international game of chess over what to do with the shells breaks out – with China and Russia looking likely to take offensive action. In time, Banks discovers more about the shells than she had bargained for, propelling towards a deeply affecting climax.

Anyone who reads my reviews for One News Page regularly will know that I don’t hand out five star reviews willy-nilly. The only other movie this year to have received the accolade was the incredible Kubo and The Two Strings (which I would still recommend animation fans purchase or on DVD or Blu Ray in the new year) – a film which haunted me for a long time after viewing, one which hit so many levels so precisely and so beautifully that anything less than a full score seemed harsh. With Arrival, I too feel I cannot give anything below a five star rating – for this is less the film I was expecting about an alien invasion and the weird reasons they may have come to Earth, but far, far more in the direction of a deeply haunting and subtly affecting movie which will leave an imprint upon me for a long time to come.

This movie is impeccably directed. Denis Villenueve has proven himself to be a master craftsman, having already chaired the hugely well-received Sicario and Prisoners, both of which have become cult hits in their own right – and the most striking elements of Arrival on first notice are his directorial choices. The situations and characters feel natural, unfiltered. There’s no hammy lines (no matter how the trailer may put things across), no blatant Hollywood-style filibusters – the use of news reports throughout the movie is extremely well-done, and Adams is the perfect lead for this film. She’s haunted, she’s brilliant, she’s desperate for answers.

Arrival is based on Ted Chiang’s novella The Story of Your Life, and the same storytelling choices in his work are ably translated over to the big screen. We’re given snippets of Banks’ life with her daughter before she tragically died, and how it affected her marriage – through flashbacks and intercut scenes. The novella does the same. Banks’ story and the investigation into the shells sew into one another as the movie continues. Some flashbacks can seem clunky, but here, they’re absolutely necessary.

This is a movie that’s mainly centered around the topic of language, and perhaps puts forward the thought that we should consider talking or communicating with each other before picking up weapons or considering offensive action. This message could have been handled with sledgehammer subtlety elsewhere, but the slow, creeping pacing of Arrival builds palpable, genuinely terrifying tension from start to finish. There is building terror in the crew first ascending the goliath shell in Montana. There is terror in the slow, satisfying reveal of the aliens. There is tension in the final act, where decisions need to be made on whether to flee, or to fight. The sound editing and soundtrack is incredible, otherworldly, horrifying. Packaged with sweeping camera direction, cautious pacing and otherworldly beings that are never too revealed nor too shrouded (anyone expecting Cloverfield levels of alien hiding can rest easy), Arrival is surprisingly disturbing – both in the creatures and the situation, and the way in which some human beings react. The ending is subtly horrifying in a manner which I really don’t think has been paralleled for a long time.

This is an absolutely beautiful movie that is best enjoyed on the big screen while it lasts, and boasts a very capable cast – but for me, the lasting, haunting moments lie elsewhere – in the script - and I’m holding back on spoiling the revelations that spill from the final act – but I will address them carefully to preserve their effect.

The final few scenes of this movie absolutely destroy everything you thought you knew about it for the prior hour and forty-five minutes. There is a huge twist that subtly and slowly creeps into view that hammers in a nail of realisation right when you least expect it. It takes you back to earlier moments in the story, to allow you to realise that all the pieces to the puzzle were already there, right in front of you. It takes an already disquieting and looming story and renders it nothing short of devastating – it strides firmly into fantasy territory, naturally, but it does so in such a tragic and haunting way that you can’t quite believe what you’ve seen.

Allow me to put it another way. While watching this movie, impressed by its visuals and tension, I grew concerned with some of its more contrived moments – to the point where it began to niggle. These moments felt more and more out of place – and I’m certainly not telling you which moments I mean, in order to preserve the twists – but then the final revelations came. All of the contrivances and moments I internally sneered at were made hugely, desperately relevant. I was forced to reconsider what I had watched, far too late to do anything about it. I’m normally au fait with spotting twists – but here, I was given a wake-up call.

There are some elements that aren’t explicitly explained, but anyone paying close attention to all the important details will be able to piece together the puzzle soon enough – trust me, this is not a Cloverfield scenario – but it must be advised that Arrival is not your typical alien invasion movie. I, like many people, went in looking forward to why aliens were there at all – I wanted to see these mysterious beings and to know all – as do the characters. However, while the questions are answered – subtly – I was completely unprepared for the tension, the direction choices, the soundtrack, the visuals, the acting and, best of all, the incredible twists.

On paper, Arrival is undoubtedly a five-star movie, a strong contender for my favourite film of 2016 (let’s see how the next few weeks go) – and while it will surely stay with me for some time yet, it’s not a movie I can easily watch again tomorrow. In time, I’ll watch it again – if only to share it with as many people as I possibly can. If you’re interested in seeing this movie, go in blind – and you’ll be very pleasantly surprised.

Is the Jurassic World Sequel a Flop With Critics?