Anyone who reads my movie reviews regularly will already be well aware of the fact that I do enjoy buddy movies in all shapes and forms – generally, anyway – and unless you really throw everything at the wall and it fails to stick the way Baywatch and CHiPS did, you have a solid template for some big laughs and some generally engaging action that really isn’t hard to get right. The Hitman’s Bodyguard already hits several targets by offering a cast of the above calibre – Ryan Reynolds and Samuel L Jackson up against Gary Oldman – in a buddy movie. This movie was printing money well in advance.

The main rundown is thus – Michael Bryce (Reynolds) is a bodyguard who has fallen into the shady business of protecting extremely shady characters – shadiness aside, however, he’s pinpointed as the best man to help safeguard hitman Darius Kincaid (Jackson), who himself has a fairly brutal reputation – as it appears the contract killer is needed as an essential prosecution aid against the tyrannical Vladislav Dukhovich (Oldman). Throw in a plotline regarding Kincaid’s incarcerated wife (Hayek) and you can pretty much otherwise fill in the gaps. In a less fun-spirited movie, this may be a bad thing – but luckily enough, the movie rattles along with action, quips and more besides to keep you consistently interested. 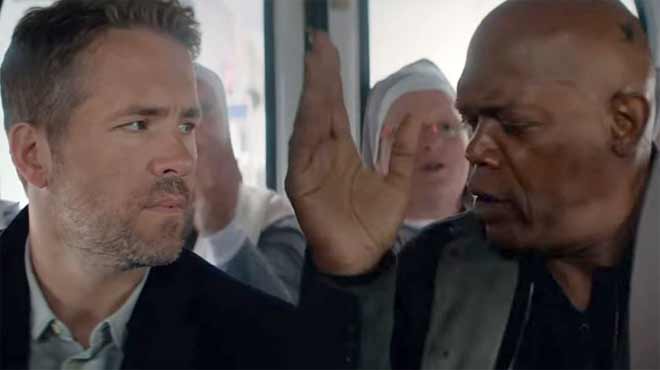 As you’d expect, the film largely coasts on the energy and charisma of its lead stars. Jackson and Reynolds are not only big box office draws but are brilliant in bouncing off one another – it’s likely that any hackneyed script would falter in a worse pair of actors – and the casting of Gary Oldman as the main villain of the piece is very shrewd indeed – while getting Oldman to be your bad guy may be seen as a fairly easy manoeuvre to make, it remains to be said that he is still one of the safest and most versatile names in the business. Oldman was last seen with Reynolds in the hugely underrated Kevin Costner vehicle Criminal, which is sadly doing the rounds in bargain bins these days.

The Hitman’s Bodyguard is very much a join-the-dots feature that follows the same path as, say, Central Intelligence in that it lumps together a ridiculous plot and series of events that pay off well thanks to the cast involved. Central Intelligence earned four stars from me last year on this alone – and The Hitman’s Bodyguard has pretty much done the same again. It’s a movie which has been critically savaged for being clichéd and full of predictability – and while this is certainly the case, charm, style, audacity and honest-to-goodness talent really do help to tie the package together. Ryan Reynolds and Samuel L Jackson face off against Gary Oldman. That is a sentence which not only gets you excited, but it is also guaranteed to work – even if the script was more akin to the likes of, say, Baywatch. Then again, not even Dwayne Johnson (the busiest man in Hollywood 2017) couldn’t save that.

All things considered, The Hitman’s Bodyguard changes absolutely nothing. The plot is densely stupid bordering on the ridiculous, the plot twists and character journeys are boring and predictable in the main – but there is so much joy, so much fun along the way that you will not care a jot. So many critics, myself included, are focused on looking for the deeper message or finer craftsmanship in some of these pictures – when we need to take more time aside to just turn our brains off for a while. In the same way that xXx 3 appealed to a certain audience earlier this year, The Hitman’s Bodyguard very much does the same – only the appeal is broader thanks to the fact that it never takes itself seriously for a second of runtime. Jackson is coasting along nicely as a bankable, memeworthy star who will go down as one of the most-employable (and most-employed) actors around. Reynolds may still be riding high as Deadpool, but he still has the deadpan chops to partner perfectly with Jackson. Gary Oldman is perhaps the greatest go-to psycho in cinema history. The formula is brilliant, even if the script and the clichés stink a little.

If you liked the look of the trailer, if you enjoyed Central Intelligence or The Nice Guys (though this doesn’t go anywhere near the level of subtle that movie did), or if you’re game for seeing this cast bandy around in big action pieces, making daft quips and acting deadly serious about bad guys in Belarus (when you know they’re phoning it in and having a damn good time doing it), do go see this movie. Ignore the critics that say it’s unoriginal. It IS unoriginal – it’s massively contrived – but it’s some of the best fun you’ll have at the cinema this summer. How’s that for an alternative spin on the critical consensus?

by Graham Pierrepoint -
Many viewers lauded the recent 2019 Academy Awards to be the best ceremony there had been in many..