Sometimes, remakes work. Sometimes, they’re necessary. Sometimes, they’re even better than the original. Flatliners was initially released back in 1990 with an all-star cast – Kiefer Sutherland, Julia Roberts and Kevin Bacon among them – and, at the time, it was considered a fairly schlocky psychological horror movie that fits into the niche that most 80s/90s sci fi blunders into. As a result, it’s a cult classic, and while it may not have changed the landscape when it came to storytelling or even scare-giving, it was a passable couple of hours that is still worth a revisit if you’re happy to look back at that sort of movie with a rosy filter. It’s not on the same scale as, say, The Thing or The Exorcist – but it’s fairly enjoyable.

Which, of course, makes its 2017 remake all the more baffling. On its way to release, no one seemed to be quite sure what Flatliners ’17 was going to be. A sequel? A remake? A reboot? Beyond Sutherland confirming that he was to return – a move which appears to have been interpreted as his original character making a re-appearance – there’s little left to back this up. Sutherland makes a cameo – as seems to be the way for many films undergoing reboots these days – but all other elements considered, this is a remake. And – let’s not beat around the bush here – it’s as pointless a remake you’ll see this year. I’m including both Baywatch and CHiPS in this estimation, if you wish to go back and read my reviews for those movies (just don’t watch them). 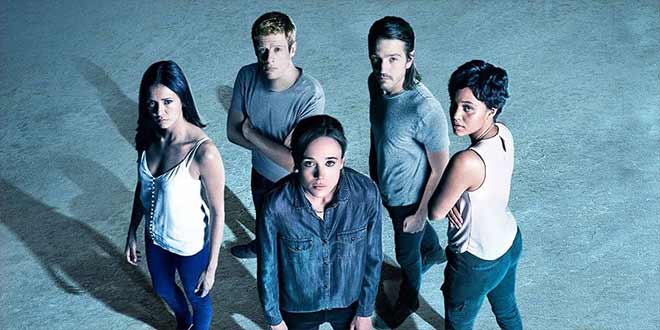 Flatliners ’17 focuses on a gang of students who find themselves increasingly mesmerised with the idea of being able to ‘flatline’ – that is, being able to experience death without going in too deep. This students are essentially experiencing near-death experiences rather like they are experiencing highs – to see what happens and to enjoy the ride – and that, at least for some of the time, is what the movie seems to suggest. Only – and of course – the procedures that the gang put themselves through leads to sinister developments – and, of course, things take a turn into horror territory, albeit towards the middle-end of the movie.

While this iteration of Flatliners does appear to have the same core idea at its heart, it is sadly beaten down heavily by relying far too heavily on boring tropes and offering far too many eye rolls for even the least savvy of audience members. While the main cast does do their best with the script that is on offer, it is highly unoriginal – and rather too predictable – for it to warrant any of the tension it tries to build in the first half. What the original carried off with its tension was a sense of subtlety – while it was cheesy sci-fi at its near cheesiest, the original Flatliners still managed to make you shuffle a little bit. Flatliners 2017, however, is unfortunately prey to the old horror stereotypes and highly signposted twists that had rendered the genre so predictable and passable until movies like It re-invented the wheel.

The characters aren’t likeable, either – one of the main issues the movie faces is in the fact that we are shoved the idea of this group being ‘millennials’ with ‘millennial issues’ down our throats a little too much. While updating a movie’s premise and setting is all par for the course, character development also requires us to see sides to the main cast we like and are perhaps a little concerned about – we also need to see major flaws, and if a movie like this is to have any chance of achieving gravitas, it needs to show its characters behaving a little more like believable human beings and less like cookie-cutter pawns dreamt up by out of touch executives.

The main issue Flatliners produces, however, is the lack of scares. While it may get less savvy viewers to feel a bit uneasy here and there, it’s so blatantly signposted and so ridiculously plodding that even someone who found Young Frankenstein creepy would be yawning before they were screaming. The whole affair feels rather unnecessary – maudlin, in places – which is a huge shame given the fact that the original concept is still fantastic. It’s a film which could perhaps have been more than the sum of its parts – but, ultimately, it plays it far too safe and offers little for new audiences to get interested in.

It is an odd thing to see a movie of this calibre – a remake of a horror classic from 1990 – come up against It, which is doing exactly the same thing. While It 2017 has dared to push the envelope and to create its own scares and nuanced characters, Flatliners 2017 rather – well – flatlines. Without much here to write home about, it’s difficult to recommend – forgettable fantasy that lacks that killer execution and the daring to be novel.

by Graham Pierrepoint -
It’s that time of year again – and before we take a look at our favourite movies reviewed..