Despite Finding Dory having largely been a return to form for Pixar last year, the animation studio still had more than a little ground to make up after Cars 2 shook the very image of the brand – while Inside Out, the aforementioned Dory and even Cars 3 have helped to repair much of the damage done, Pixar is hardly the indefatigable bastion of perfect family cinema that it may once have been. It goes without saying that a lot was riding on Coco – and as one of the few Pixar properties in recent history to not be an extension or precursor to an existing franchise or band of characters, it needed to pack a resonant punch that was less Good Dinosaur and more Up, or Monsters Inc – and thankfully, for the most part, it deserves to sit right up there with the best of them.

Miguel is a spirited 12 year old who’s a budding musician in a burgeoning Mexican family who despise music more than anything in the world – thanks to the departure of his great-great grandfather, who supposedly left the family to follow his musical dream and never came back. Miguel surmises that his ancestor is in fact his musical hero, Ernesto de la Cruz – and in an effort to try and make his own mark on a local festival and contest, ends up procuring his hero’s guitar – only to find himself thrown into a limbo of sorts where those who have passed continue to look over the living. What transpires is Miguel’s journey to try and find his familial link to music, while his family try to get him to see sense. 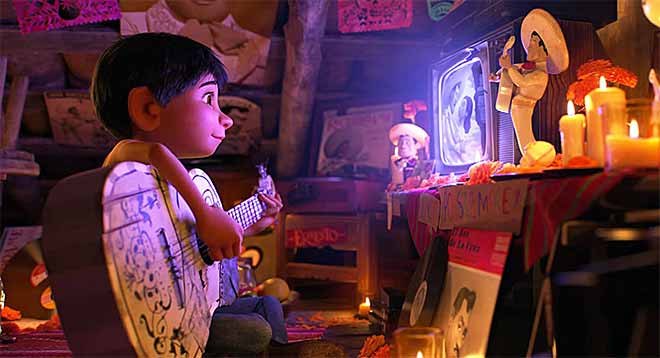 Despite its fairly complex premise – for a family movie or animation, at least – Coco is extremely well-paced. The film carries the usual Pixar sheen (which, as you’ll already know, is anything other than ordinary) and a ton of comic timing which helps to sell some of what may be extremely sensitive subject matter. The topics of death and acceptance – as well as finding out who you really are inside – are given plenty of room to breathe, and they’re neither hammered in with gusto nor are they left to dwindle. It certainly helps that Miguel is a spirited lead who is very easy to follow and to believe in – certainly, if anything, the characters are among the most likeable Pixar have ever created. Even those you may not necessarily agree with initially have their charms – and while the main villain doesn’t really rear their head until late on in proceedings, the movie doesn’t really need one. There’s a very smart conflict in play here, and the world that we are thrown into and introduced to is both addictive and inspiring.

It’s nice to see Pixar handle the concept of death and remembrance so sweetly and so succinctly – everything is handled with a soft patter and a willing charm that doesn’t pander to the audience, either. Kids are wrapped up in cotton wool by premises such as these far too often – and Coco is genuinely a breath of fresh air in this regard. It seems to be one of Pixar’s longest movies – but to that end, it doesn’t ever really drag. It’s an absolute marvel to look at and there’s a lot of joy to behold – while the concept could have been given the Inside Out treatment – a lot of heavy peril has been avoided – there’s a few different ways that the movie could have traipsed and I’m rather glad, for one, that it didn’t.

However, what’s preventing Coco from reaching that elusive perfect score is the fact that the story still has the hallmarks of most Disney and Pixar films of the past few years – the hidden villain – who isn’t really that well hidden. I’m not casting spoilers into the proceedings here, but the twist is particularly obvious even early on into the movie – though one has to remember that this is levelled towards a family audience, and that we shouldn’t always expected a Meet The Robinsons level of twisting and trickery. That being said, the ‘hidden villain’ premise in Disney movies seems to be getting a bit strained – it dates all the way back to the likes of Wreck-It Ralph and Frozen, though you could look all the way back to Monsters, Inc if you want to find the genesis of the trope – and for me, it’s high time this type of twist was put out to seed.

All things considered, however, Coco is brilliant family fun that handles sensitive themes marvellously well – and, as a result, it firmly cements itself as one of the finest titles in the Pixar library. UK viewers can now finally get a taste of it – and it’s been well worth the wait.

by Graham Pierrepoint -
This year’s Academy Awards – the 90th such event occurring on record – is usually..