Downsizing has been out in cinemas for some time now, and while I have only had the chance to watch and review the movie in recent times, I genuinely feel it is worth doing for a number of reasons. Last week, I reviewed the third instalment in the critically lambasted Fifty Shades of Grey series – a trio of movies which has received bottom-of-the-barrel scores across the board – and yet, even now, I can safely say that I was less disappointed having seen another hour and a half of Anastasia Steele and Christian Grey than I was having sat through Downsizing. This is perhaps not only a prime contender for my least favourite movie of the year (we’re only in February), but perhaps one of my least favourite movies of all time. It is a picture that is so polarising, it teeters on that rare 50-51% approval rating on Rotten Tomatoes – and my reasons for so disliking this movie so intensely deride largely from the fact that it is such a colossal, unmitigated waste of a premise, it genuinely beggars belief. What actually happened here?

For the first time in a long time, perhaps since I started these reviews, here is a spoiler warning – I’m going to need to discuss why this movie fails to work on so many levels by giving away a fair chunk of what transpires. 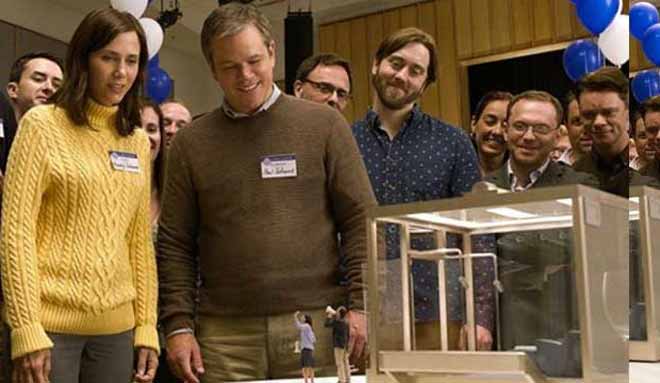 The concept here is pure sci-fi – brilliant sci-fi – as society starts deciding to shrink themselves to be able to boost their income and to effectively live easier lives –following pioneering trials. It effectively means that you’d shrink yourself to a tiny size forever to be able to convert your meagre savings into millions of dollars – and, for the most part, everything seems cushy. Matt Damon is Paul Safranek, who, with wife Audrey (Kristen Wiig), decides to go for the downsizing route – only for Audrey to back out mid-process, and after Paul has already been shrunk. From here, Paul descends into a mid-life crisis of sorts – and it’s right about here that things really start to go downhill.

This movie could have been brilliant. It could have been a comedy – the trailers certainly made it seem that it was – it could quite easily have been a horror. The first half an hour is great – the set-up is amazing – you are genuinely looking forward to seeing what happens in the smaller community, how they survive, what problems they face, whether there’s any sinister secrets hiding beneath the surface of downsizing as a concept. It could have gone in a million different directions. Instead, bizarrely, once Kristen Wiig (disappointingly only on screen for about fifteen minutes in total) is out of the picture – literally – the script weirdly descends into a muddling, moping mess.

It shows us what happens to Paul – he has a wild night with a neighbour, he finds someone he thinks he can help treat (he’s an occupational therapist), and we find that there are slums full of impoverished downsizers – and this is where the political message creeps in. It is a hugely important message – we should all be looking after each other within our means – but it is so weirdly shoehorned in and so aggressively so that the movie changes shape and tack completely. We are introduced to a Vietnamese rebel played by Hong Chau – who, for some reason, is depicted in such a bizarrely insensitive and uncomfortable way that it’s almost painful to behold. The script is largely to blame – and I’m only scratching the surface.

The movie later decides to maintain this new character as pivotal to Paul’s life, as he continues to try and find his purpose in the small community – only for a third act to completely derail the plot yet again, with several characters learning that global warming is set to destroy the world ‘soon’. This means that we have moved from an interesting sci-if premise with a horror/comedy slant about shrinking to save money, into a dark, depressing and political study that doesn’t make much sense within the world of the film (though I guess black market downsizing exists?) – only for it to swerve again into an allegory about environmental disaster. These are all good things to be caring about – let me make this abundantly clear – but this film is written and carried out in such a haphazard and blindly stumbling fashion that it is completely and utterly underwhelming on almost every level. I’ll ask again – what happened here?

The trailers have come under fire for, according to some people, depicting events in a manner that transpire differently to how they are carried out. This isn’t anything new, but it’s still part of the bigger problem. A huge problem – and this is a big one –is that, from the second act onwards, we might as well not be in the small world anymore. There are a couple of nods here and there, but that part of the film – the one with promise and the one most people signed up to watch – was clearly forgotten about a long time ago. I’m all for movies putting across important messages – and the ones here are very relevant indeed – but to completely throw your main concept away in favour of hammering home two almost completely unrelated acts? I don’t think I’ve been as disappointed in a movie since watching The Circle.

Downsizing, had it retained its focus on the main premise and had it gone in a direction which may even have been considered safe, it would have actually still been fairly enjoyable – let’s see a sinister plot get unearthed, or see what happens to small people in our larger world, or let’s even see what other small communities are like – instead, we have baffling swerves and misdirections which not only come across as desperately non-sensical, but also deeply unsatisfying. There have been critical appraisals of this movie – perhaps for the messages that it is putting across –but the way in which it does this, especially in light of destroying a brilliantly serviceable premise – is nothing short of infuriating.

Downsizing is out on DVD and Blu-Ray soon – I’d suggest seeing if any deleted scenes suggest what might have been – but I’d sooner recommend you rent or stream Honey I Shrunk The Kids instead. An utterly unmitigated waste of a premise, and one which remains bitterly disappointing.

by Graham Pierrepoint -
It’s been a very vivid year for film – mainly on the positive side. 2018 has been a year..