A WRINKLE IN TIME

Based on a critically lauded book written by Madeleine L’Engle many years ago and having already been developed by Disney for a TV movie in recent years, A Wrinkle in Time is a story which, while it may have been out of public consciousness for some time, is still remarkably essential reading. It is part of a wider series – and, in its raw, novel form, it is a book which manages to offer somewhat complex concepts and turns of events in such an innocent and dreamlike way that it is hard to be compelled by the bigger picture. Developing the first of L’Engle’s tales for the big screen was never going to be an easy feat – and while plenty here has been done well, there is plenty more to talk about in terms of missed potential – particularly as it is a movie which has been adopted online as a beacon for acceptance and inclusivity. There’s certainly a message or two here – but whether or not it is delivered quite so subtly remains up for debate.

Meg (Reid) has never quite gotten over losing her father (Chris Pine), who went missing without trace some years prior – and, as a result, she is despondent that there isn’t even so much as a hint as to where he may have disappeared. Enter the bizarre trio of Mrs Whatsit (Witherspoon), Mrs Who (Kaling) and Mrs Which (Winfrey), who step in to show her the truth – that her father has in fact been transported across the stars, across the dimensions – and that he is alive, if not stranded, somewhere across time and space. What transpires is a journey unlike any Meg has been on before – as the universe opens up to allow them to physically transcend galaxies in an effort to track down the missing scientist. Along the way, however, there are some sinister forces – meaning that this is going to be far more than just your basic rescue story. 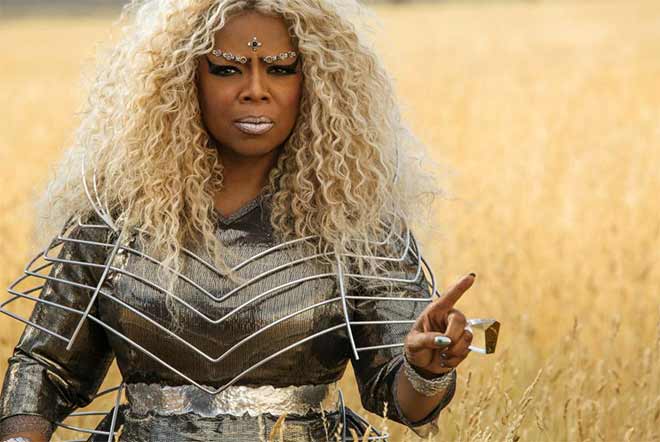 A Wrinkle in Time (Disney)


The story is classic children’s sci-fi – it’s an award winner, and there’s little wonder why – and it fits in perfectly with the previous Disney adaptations that have made their way to the big screen over the years. Tales such as Flight of The Navigator and perhaps even The Black Hole fit in just as well within Disney’s library of family-friendly fantasy – and while there are genuine moments of otherworldly peril and concern in this picture, it is grandiose enough to inspire viewing. Certainly, from a visual perspective, it is an incredible piece of work – from costume design to visual effects – while some reviews are claiming that the CG here simply doesn’t do the business in 2018, I refute by stating that a little more imagination is required.

Imagination, unfortunately, is where things start to untangle for this movie. The book succeeded in such a way because it was so dependent upon the imagination of the reader – the events that unfold are hardly normal by any stretch of the imagination, which of course means that you’re going to need to paint your own picture in your own head when reading. This made the original story so captivating and worthwhile for children – the problem here, of course, is that an attempt has been made to transfer all of the oddness and all of the mind-boggling twists and turns into a family-friendly feature length film. If I even dare discuss some of the finer points of the story and the lore here, I’m concerned I might just get tangled up myself.

Is A Wrinkle in Time unfilmable? No. Is this adaptation a bad movie? Not at all – there’s plenty going on here, and there’s lots for kids and adults to take away – but the sheer intensity and complexity of the original narrative remains rather hard to tangle with when it comes to transferring to a linear experience. The whole thing is somewhat messy – there’s plenty of heart and a core message here, but some viewers may find it either laid on a little too thick, or that the movie on the whole is just far too muddling to be enjoyed on a singular basis. It is also somewhat proud of itself – something which I intensely dislike when it comes to movies – and this is especially ill-advised for a family picture.

All things considered, it’s hard not to enjoy A Wrinkle in Time – but it is hardly the epoch-making, game-changing, society-challenging hashtagging masterpiece that some people will have you believe. It’s fairly enjoyable, in places, when it’s not giving you a headache or brow-beating you with treacle-thick messages. Give it a look if you liked the trailer – but this won’t be topping any best-of lists this year.

Leave it up to the great Toni Morrison to remind us of the very important lesson that black people should never look at themselves..