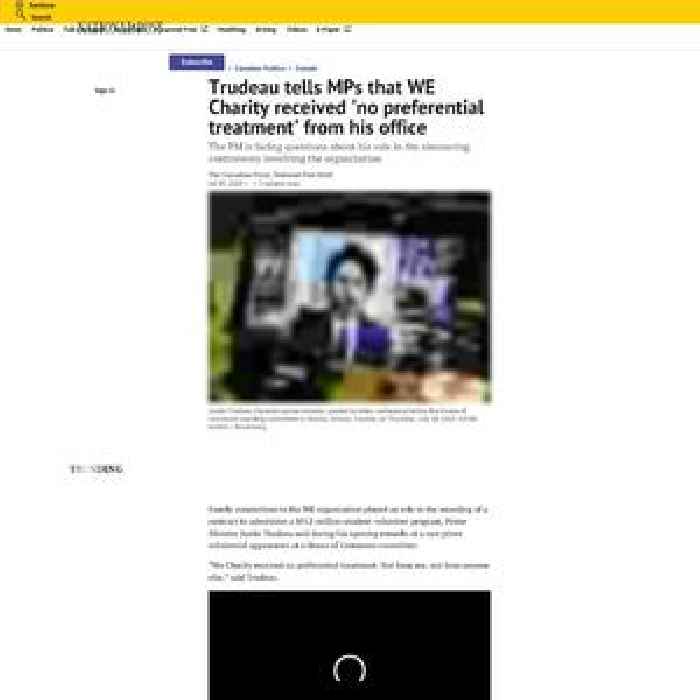 Justin Trudeau is in the hot seat today for a rare prime ministerial appearance at a House of Commons committee, facing questions about his role in the simmering controversy involving the WE organization.

MPs on the finance committee are to grill Trudeau about the events that led to his Liberal cabinet asking the WE Charity to oversee a $912-million program that provides grants to students and graduates for volunteering.

Conservative Leader Andrew Scheer says he hopes to learn from Trudeau what due diligence was done on the WE organization before he declared in late June that WE was the only organization capable of administering the Canada Student Service Grant.

Scheer says he expects Trudeau to explain why this program, touted as having a $912-million budget, was expected to actually spend far less, and why no other organizations were considered for the job.

He is calling on Trudeau to answer questions for three hours today, following a motion passed Wednesday night by the MPs on the finance committee requesting longer appearances by both Trudeau and Telford.

On Wednesday, Conservative MP Pierre Poilievre warned that if the prime minister doesn’t fully answer questions about his own and his family’s ties to the WE organization, they will call him back again.

“We want the truth, the whole truth and nothing but the truth,” Poilievre told reporters in Ottawa Wednesday.

Many of the Conservatives’ questions for Trudeau will revolve around hundreds of thousands of dollars in speaking fees paid to members of his family for appearing at WE events, along with related expenses, Poilievre said.

WE had previously confirmed that Trudeau’s mother, Margaret Trudeau, was paid about $250,000 for 28 speaking appearances at WE-related events between 2016 and 2020 and his brother Alexandre has been paid $32,000 for eight events.

WE co-founders Craig and Marc Kielburger testified Tuesday that Trudeau’s wife Sophie Gregoire Trudeau has participated in seven WE Days and received an average of $3,618 for each event, to cover her expenses. That works out to $25,326 in total.

The Conservatives are now calling on federal ethics czar Mario Dion to widen his probe of Trudeau to include travel expenses WE covered in addition to speaking fees for his mother, wife and brother.

“What else is he hiding in this affair?” Poilievre said Wednesday.

On Wednesday, Dion sent letters to Conservative and NDP MPs saying he is widening his investigations into trips Finance Minister Bill Morneau and his family participated in that were sponsored by the WE organization.

Morneau told the Commons finance committee last week he had freshly repaid WE Charity more than $41,000 in expenses for trips he and his family took in 2017 to see and take part in some of the organization’s humanitarian work.

NDP Leader Jagmeet Singh said he believes details that have emerged since the program was announced suggest the deal awarding WE the Canada Student Services Grant program was never about students, but about helping close friends of the Liberals and of Trudeau.

Nine months ago, Doug Fisher, a longtime resident of Cabbagetown in Toronto, contacted Mayor John Tory’s office about concerns he..

John Ivison: Whether Trudeau's testimony worked or not, the winds of change are blowing for Liberals

Jean Chrétien used to tell his cabinet a folksy allegory that suggests how he would have handled the WE affair.