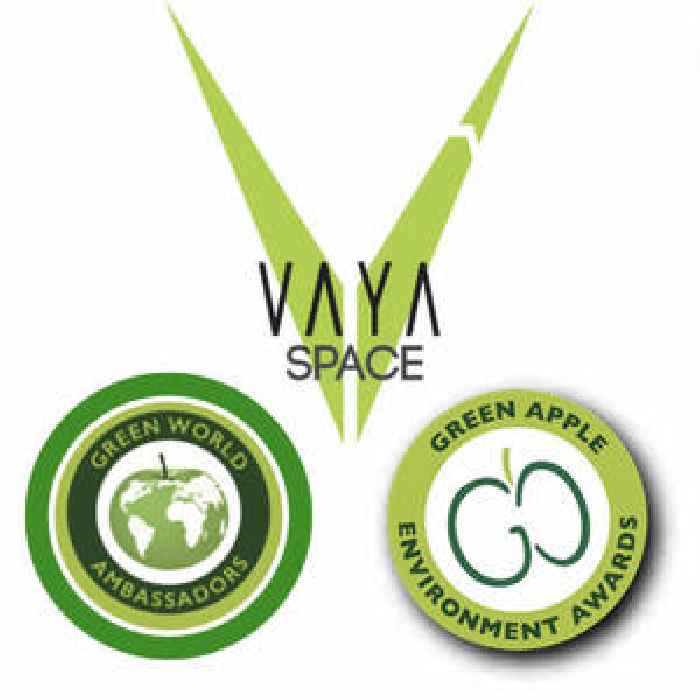 The International Green World Awards represents the world's premier recognition for companies and countries for their positive impact on the environment. Established in 1994, The Green Organisation is an international, independent, non-profit, non-political, environment group dedicated to recognizing, rewarding, and promoting environmental best practice around the world. The program is considered the biggest environmental awards campaign worldwide, recognizing governments, ministries, companies, organizations, and communities across the private and public sectors. Previous winners include The Coca-Cola Company, Phillip Morris, DoTERRA, Infosys, BNP Paribas, and the Desalinization Institute in Saudi Arabia.

Today's announcement recognizes Vaya Space for earning The Green Organisation's highest award, its Gold Global Green World Ambassador Award, distinguishing Vaya for its outstanding contributions to the environment, highlighting the fact that the company utilizes more than two million recycled plastic bottles per launch. Vaya Space was selected over more than 500 other nominations and will be presented with its award at a presentation ceremony in the Houses of Parliament, London, on Nov. 21, 2022.

Brent David Willis, Chief Executive Officer of Vaya Space, commented, "We are extremely grateful to receive this recognition, especially from such an esteemed group like The Green Organisation. Making a difference for the planet is part of the raison d'être of Vaya Space, and our team being recognized for doing what we do every day is a tremendous honor."

Vaya Space, Inc. is a newer entrant into the Space Launch sector, whereby more than 100,000 satellites are expected to be placed in low earth orbit of over the next 10 years. Vaya's first launch was earlier in 2022, and the Company's first two patents were also just recently issued, validating industry-transformative capabilities that significantly improve reliability and safety at a cost that is less than half that of competitors. Unlike legacy rocket engine technologies that emit metric tons of carbon soot, Vaya utilizes 3D-printed recycled thermoplastics as its fuel, emitting water vapor and the least amount of CO[2] of any competitor.

*About Vaya Space, Inc.* Vaya Space is a privately owned, vortex-hybrid rocket company based on the Space Coast of Florida with subsidiary operations in Brazil. Vaya Space has developed breakthrough and patented technologies that transform access to space. Vaya was created in 2017 by Sid Gutierrez, former Space Shuttle Commander and NASA's first U.S.-born Hispanic astronaut. Launch Command's final words to Sid at liftoff were "Vaya con Dios" vs. its traditional "Godspeed," and shortly after this inspiration, Vaya was born.

Vaya is a purpose-driven, sustainability focused, and environmentally conscious enterprise dedicated to making a difference for humankind. Vaya Space competes in the estimated $1 trillion small satellite launch sector. Vaya's unique vortex-hybrid rockets utilize the equivalent of two million recycled bottles per launch and overcome the costs and other issues associated with traditional liquid bi-propellant rockets to transform the safety and affordability of the industry.

Additional information can be found at vayaspace.com.