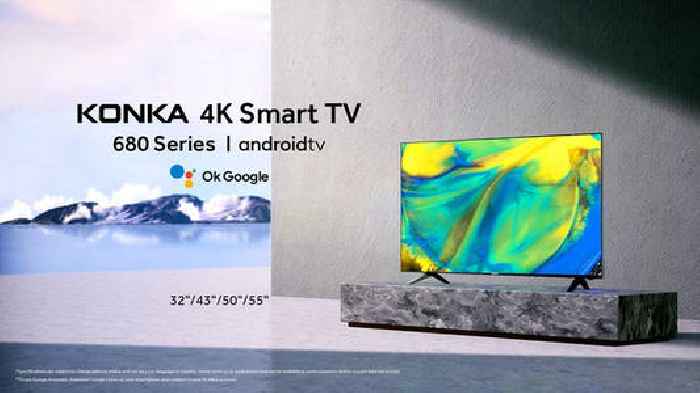 "People's lifestyles are becoming more diverse, and for consumers, injecting fresh elements into their ordinary lives has become a priority," said Kobe Liao, General Manager of International Business Division, KONKA. "The KONKA 680 series TV has been developed to allow more families to enjoy the difference that intelligent products can bring to their daily lives."

KONKA 680 Series TV, running on Android 11 OS, allows customers to switch between multiple tasks without exiting the current operation in the user interface. This means they can directly preview and switch from an app, TV channel, movie, or live stream by using just the home key.

The operating system also comes equipped with the powerful Google Assistant**. Customers can activate the voice assistant on any interface by pressing the Voice button on the remote control. The assistant then allows them to take total control over the TV using their voice alone. Customers can simply talk to control apps, the entertainment system, as well as smart home devices, boosting their experience considerably.

At KONKA, it is believed that technological innovation will lower overall product manufacturing costs, allowing more consumers to buy higher-quality products for less money. With this perception, KONKA has continued to strengthen its commitment to R&D and innovation. It has launched several consumer products powered by its Mini LED, OLED, and Micro LED technologies, propelling the commercialization of pixel pitches from the professional display field to the broader consumer market and thus improving user experience.

* Specifications are subject to change without notice and can vary per language or country. Some services or applications may not be available in some countries and/or require Internet access.
** To use Google Assistant, download Google Home on your smartphone and connect to your KONKA at home.

As a platform-based company driven by technological innovation, KONKA's business scope covers consumer electronics products, semiconductor technology, eco-friendly technology, industrial parks, platform service, and investment & finance. Established in 1980, KONKA is China's first Sino-foreign joint consumer electronics enterprise that has been listed on Shenzhen Stock Exchange. Since 1999, KONKA has been ranked among China's top 100 best companies and has also been named one of the "Top 10 most valuable brands in China".  With annual revenue of over $7 billion, KONKA has more than 40 subsidiaries, 200 sales offices, more than 3,000 service outlets and over 15,000 employees.