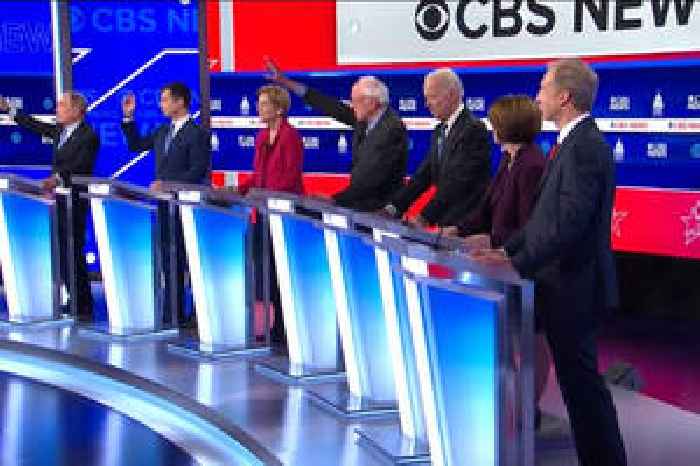 Candidates sustained their attacks on Bloomberg, and Sanders was also the focus of much criticism, something he’s largely avoided until now. But none of the candidates, including Bloomberg and Sanders, landed any real punches during the debate. It largely amounted to a recitation of prior criticisms and reiteration of stump speeches — though booing audience members made things lively more than once.

Here are four highlights from the evening:

Elizabeth Warren said that while she and Sanders agreed on many issues, he was not doing the “hard work.”

“I dug in, I did the work, and then Bernie’s team trashed me for it,” Warren said when asked about her economic plans for the country. “We need a president who’s going to dig in and do the hard work.”

*Also Read:* Rep. Adam Schiff: As Someone 'Inside' Trump's Head, It's 'Scary in There'

Amy Klobuchar accused Sanders of creating “a bunch of broken promises that sound good on bumper stickers,” particularly attacking his Medicare for All plan.

Klobuchar also said she did not believe Sanders was the best candidate to lead the Democratic nomination. “It matters if you can actually get something done,” she said. “It’s not about who can talk the best.”

“Bernie hasn’t passed much of anything,” Joe Biden quipped near the half-hour of the debate.

Mike Bloomberg, meanwhile, said that the Russians were somehow aiding in Sanders’s election, while Pete Buttigieg said that a Sanders vs. Trump election would be “chaos.”

Sanders seemingly took the heat with a touch of humor: “I’m hearing my name mentioned a little bit tonight. I wonder why.”

But later into the debate, the candidates piled on once more over Sanders’s praise for the 1960s literacy program under the Fidel Castro regime in Cuba.

“I am not looking forward to a scenario where it comes down to Donald Trump with his nostalgia for the social order of the 1960s and Bernie Sanders with his [nostalgia for the 1960s],” Buttigieg said. “We’re not going to win by reliving the cold war.”

“I have opposed authoritarianism all over the world,” Sanders said in his defense. “When dictatorships, whether it’s the Chinese or the Cubans, [do something good] you acknowledge that.”

*2. Pete Buttigieg appeals to billionaires to help defeat President Donald Trump:* “I will raise your taxes but if you’d like to defeat Donald Trump, please go to peteforamerica.com and donate the legal maximum of $2800.”

The quip came as he and Sanders were debating about their campaigns’ grassroots and individual donations.

The American people “don’t want candidates to be running to billionaires for huge amounts of funding,” Sanders said. “Pete has gotten funding from 50 billionaires.”

*3. Warren and Bloomberg clash over NDAs, comments toward women*

Warren put the pressure on Bloomberg once again to release his former female employees from their nondisclosure agreements.

Though Bloomberg has released three women from their NDAs since the last debate, Warren made it clear she did not think that was enough.

“Sign a blanket release and let those women speak out,” Warren said.

“I don’t know what else she wants me to do,” Bloomberg said, referring to the three women he had already released from the NDAs. “The problem with this senator is enough is never enough.”

Warren also brought up a crude comment that a former employee accuses Bloomberg of telling her: “At least I didn’t have a boss who said to me, ‘Kill it,’ the way that Mayor Bloomberg is alleged to have said to one of his pregnant employees,” Warren said.

Bloomberg also misrepresented his history with New York’s stop-and-frisk policy during the debate, claiming, as he did during the last debate, that he personally and on his own initiative reduced the policy by 95% when he “realized” that it was “out of control.” That was not factual.

In reality, a judge in 2013 ruled that stop-and-frisk was deployed unconstitutionally and ordered the city to stop until it could articulate a clear, racially unbiased version of it. That 95% drop occurred as a direct result of the ruling, a ruling Bloomberg angrily denounced at the time. Further, Bloomberg consistently defended the policy as mayor and continued to do so until just before he announced his intention to enter the Democratic primary. He only apologized in late 2019.

*4. Biden gets testy on time limits*

The former vice president repeatedly pushed back when moderators began cutting him off early in the debate.

“I don’t know why you keep cutting me off,” Biden said after a testy exchange between Buttigieg and Sanders. “I’m not going to be quiet anymore, OK?”

“Do we just speak up when we want to? Is that the idea?” Biden said at another time after Warren was able to get her points in.

“Why am I stopping? No one else stopped,” Biden asked on stage. “It’s my Catholic school training.”

Stephen Colbert did his “Late Show” monologue live following the Democratic debate Tuesday, sharing his take on the spectacle..

The life of Michael Bloomberg: How an unemployed 39-year-old banker became a billionaire, 3-time mayor of New York, and presidential hopeful