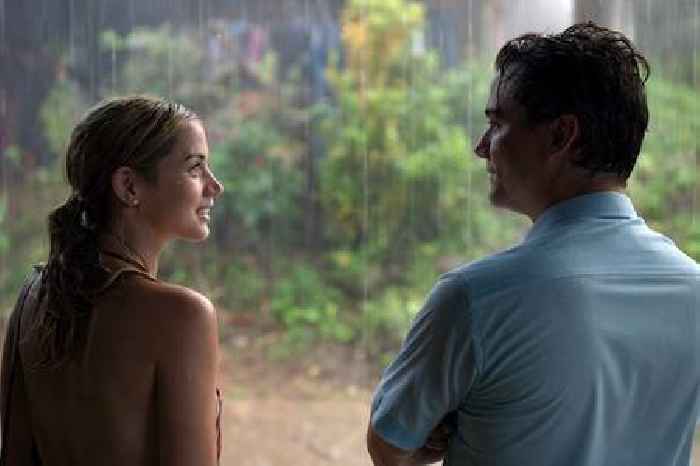 Director Greg Barker doesn’t quite have the track record or the mystique of Werner Herzog, but he enters Herzogian territory with “Sergio,” his drama about United Nations diplomat Sergio Vieira de Mello that premieres on Netflix on Friday.

Barker’s new “Sergio,” which stars “Narcos” star Wagner Moura as the celebrated Brazilian who worked for peace around the world for more than 30 years, is the second “Sergio” that the director has made, the first being his 2009 documentary. That puts Barker in the company of a small group of directors who’ve made a documentary about a subject, and then later adapted the same story into a narrative feature – among them Herzog with his 1997 documentary “Little Dieter Needs to Fly,” about Vietnam War POW Dieter Dengler, and his 2006 feature “Rescue Dawn, which starred Christian Bale as Dengler; Dan Krauss with the 2013 doc and 2019 narrative features “The Kill Team”; and Fenton Bailey and Randy Barbato with doc and narrative versions of “Party Monster” in 1998 and 2003, respectively.

If you want to make a side-by-side comparison of Barker’s two versions of “Sergio,” it’s easy: The documentary version was made for HBO but is now available on Netflix, where it can serve as either a setup to the new film before you see it, or a fact-checker afterwards.

The surprising thing, in a way, is how similar the two films are. It’s not just that they both tell the same story – in many ways, they also tell it the same way and with similar imagery.

The story, though, is a sobering one at a time when the United States appears to be pulling further and further away from the kind of international cooperation that the U.N. was meant to supply. Sergio (everyone just calls him by his first name, says U.N. Secretary-General Kofi Annan in the film) joined the U.N. after his days as a student revolutionary in Paris; he became known for his work with Cambodian refugees and then was instrumental in helping East Timor obtain independence from Indonesia. When the U.N. wanted to install a human-rights watchdog in Iraq after the U.S. invasion, he was the obvious choice – but that also made him an obvious target, and shortly after his arrival in Baghdad an Al Qaeda suicide bomber drove a truck into the U.N. headquarters in that city.

The new “Sergio,” which premiered at Sundance and is Barker’s narrative debut after a string of documentaries that include “Ghosts of Rwanda,” “Manhunt” and “The Final Year,” lets the story play out the same way it does in “Sergio” the doc. The action takes place in flashbacks, as two U.S. servicemen frantically attempt to dig Sergio and his aide Gil Loescher (played by Brian F. O’Byrne) out of the rubble after the bombing.

But the new film is even bolder in the way it shuffles time, jumping back and forth as small moments in the wreckage trigger memories and send us to Cambodia or East Timor or New York City. The movie frequently doubles back on itself, sometimes adding new shades to moments we’ve seen before and sometimes going over previous territory in a way that brings diminishing returns.

Without doc-style talking heads to explain the story, the characters can get a little blunt and dramatic with their pronouncements. When Sergio eyes the U.N. headquarters in Baghdad and says it doesn’t look welcoming, Gil snaps, “This is Baghdad, Sergio, not Saint-Tropez.” When Sergio has a disagreement with American diplomat Paul Bremer (Bradley Whitford) over the U.N’s role in Iraq, Bremer icily says, “Welcome to the big leagues, Sergio,” and Sergio counters, “The only reason I’m here is because you broke it and don’t have any idea how to put it back together again!” And when things get dicey with Sergio’s girlfriend, U.N. economist Carolina Larriera (“Knives Out” star Ana de Armas), she declares, “I know what I want from my life, Sergio. I’m not going to wait for you to decide what you want from yours.”

If the dialogue sometimes seems a bit too on-the-nose, it’s true to an idealistic man whose exaggerated speaking style is accurately captured by Moura (though he might give it a little extra oomph sometimes). “Sergio” the narrative feature is meant to be a psychological portrait of a complicated man, hitting areas that “Sergio” the doc couldn’t get to – and Moura, who’s a dozen years younger than the real Sergio was during these events, finds the complications in a gifted diplomat whose endless charm and idealism is mixed with a fair amount of pride, a lot of rashness and an inability to commit to anything “long-term” – i.e., his family.

For much of the movie’s middle stretch, the film turns into a romance between Sergio and Carolina, which began when Sergio was an absentee husband and father of two. The romance takes place against a backdrop of global conflict zones and might feel like a detour of sorts in a film that celebrates the man’s life work, but Moura and de Armas throw off enough sparks to make it an appealing detour.

It also fits with the streamlining and adjusting necessary to adapt Sergio’s story for a narrative feature. The biggest example of this might be in the character of Gil Loescher, who was trapped next to Sergio in the collapsed building. In the film, Loescher is a longtime right-hand man who had been trying to talk sense to the headstrong diplomat for years – but as the end credits admit, that version of Loescher is actually a composite of several people in Sergio’s life.

Fans of the documentary won’t find too much here that rings false, and fans of this film who then turn to the doc will find themselves on familiar territory. The new “Sergio” isn’t as seamless or as powerful as Barker’s work in the nonfiction arena, but it takes chances and finds some real lyricism along the way.

And speaking of Barker’s nonfiction work, his documentary about the U.S. war in Afghanistan, “The Longest War,” premieres on Sunday on Showtime.

Coronavirus: The Canceled and Postponed Events in Tech, Media, Sports and Entertainment (Updating)