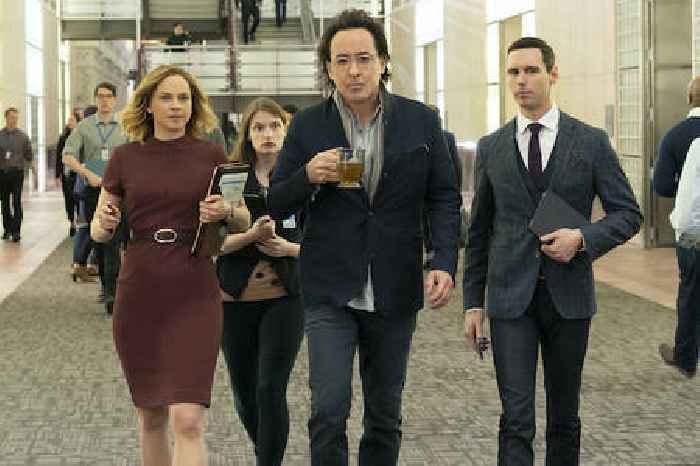 In the clip, which is available via the video above, you’ll meet a group of young comic fans who discover the conspiracy that the graphic novel “Utopia” is actually real, despite the fact they are told it’s just “a story about a rogue scientist who created biological warfare.”

Things get trippy as John Cusack’s Dr. Kevin Christie asks in a voiceover, “What have you done today to earn your place in this crowded world?” and Rainn Wilson’s Dr. Michael Stearns straps on a hazmat suit before inserting himself “into a viral pandemic,” while Ian (Dan Byrd), Becky (Ashleigh LaThrop), Samantha (Jessica Rothe), Wilson Wilson (Desmin Borges) and Grant (Javon “Wanna” Walton) come together to try to unravel this mystery.

“We all have our purpose,” Dr. Christie says to someone off camera. “This is yours.”

Oh, and if you didn’t actually believe “Utopia” was real, the fact that Jessica Hyde (Sasha Lane), the central character of the comics, shows up to help them save the day.

“Utopia” centers on a group of comic fans who meet online and bond over their obsession of a seemingly fictional comic called, “Utopia.” Together, Ian (Dan Byrd), Becky (Ashleigh LaThrop), Samantha (Jessica Rothe), Wilson Wilson (Desmin Borges) and Grant (Javon “Wanna” Walton) unearth hidden meanings cloaked within the pages of “Utopia,” predicting threats to humanity. They realize these are not just the makings of a conspiracy; they are very real dangers coming alive right now in their world. The high-stakes adventure brings the group face-to-face with the comic’s famed central character, Jessica Hyde (Sasha Lane), who joins them on their mission to save the world while harboring secrets of her own. The series also stars John Cusack as Dr. Kevin Christie, Rainn Wilson as Dr. Michael Stearns, Farrah Mackenzie as Alice, Christopher Denham as Arby, and Cory Michael Smith as Thomas Christie.

Inspired by the British series of the same name, the eight-episode “Utopia” will launch this fall on Prime Video.

TheWrap is spending the week with Comic-Con@Home — check out all of our ongoing coverage here.

How the Coronavirus Pandemic Cost Comic-Con 2020 Millions of Dollars

Comic-Con@Home: Inside the First-Ever Virtual – and Free – San Diego Comic-Con

Amazon is out with its list of everything new coming in August, and highlights include Amazon Originals like “Chemical Hearts”..