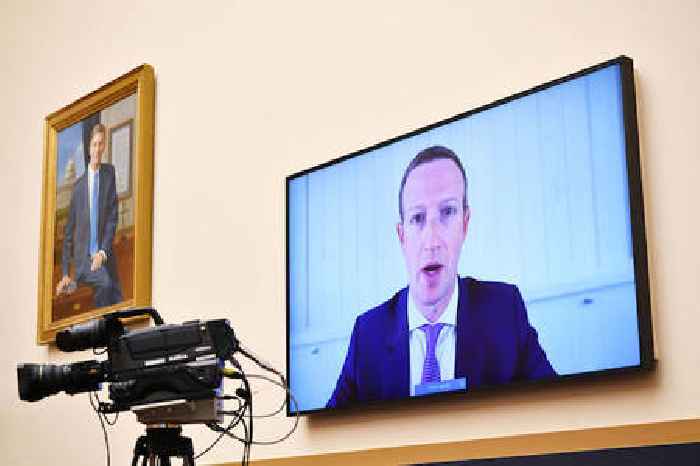 Wednesday’s congressional hearing on potential antitrust practices among major tech companies — featuring testimony from the chief executives of Apple, Amazon, Facebook and Alphabet, Google’s parent company — vacillated between insightful and downright absurd; frankly, the hearing leaned more toward the latter and appears unlikely to have a lasting impact.

Together, Facebook’s Mark Zuckerberg, Apple’s Tim Cook, Amazon’s Jeff Bezos, and Alphabet’s Sundar Pichai run companies that have a combined valuation of $4.85 trillion. There were relevant questions worth asking them about how their businesses operate — and some were asked — but on several occasions, the hearing devolved into a farce; questions about censorship decisions made by tech companies not even included in the hearing were asked, while at other times, representatives yelled at each other to wear their masks.

If you missed the hearing, don’t worry about it. Here are the seven moments that stood out.

*1. Censorship was a hot topic*

Wednesday’s hearing was nominally focused on anti-competitive practices by the four tech giants. But social media censorship, as some might have expected, remained a topic several GOP congressmen preferred to discuss. Things did not get off to a great start, though. Early in the hearing, Rep. Jim Sensenbrenner (R-Wis.) asked Zuckerberg why his company had taken down Donald Trump Jr.’s recent post about hydroxychloroquine. The problem, though, was Sensenbrenner was referring to something Twitter did, not Facebook.

At other points, Zuckerberg defended Facebook’s track record on censoring content, saying the company had “distinguished ourselves as one of the companies that defends free expression the most.” He added that Facebook has no interest in being the “arbiters of truth,” but that it remains focused on weeding out hateful content.

The dividing line on Wednesday seemed to be Republicans worrying Facebook was cracking down too much on content, while Democratic representatives like Dave Cicilline ripped Facebook for not doing enough to censor hate speech.

Amazon’s head honcho went nearly two hours without being asked a single question — a conspicuous length of time that many Twitter users were quick to point out. Circumstances changed, though, when Rep. Pramila Jayapal, from Amazon’s home state of Washington, pressed Bezos on Amazon’s business practices. “Let me ask you, Mr. Bezos, does Amazon ever access and use seller data when making business decisions?” the Democrat asked.

Bezos said Amazon’s policy prohibits such a move, but that he “can’t guarantee” it’s never happened.

Later, Bezos was asked whether Amazon had purposely slashed the price of diapers to undermine Diapers.com; Rep. Mary Gay Scanlon (D-Penn.) said documents showed Amazon was willing to lose $200 million on selling cheap diapers to bust its competitor. Ultimately, Amazon bought Diapers.com in 2010 for $450 million. The move, according to Scanlon, was a prime example of Amazon using its weight to systematically weed out rivals. Bezos said he didn’t agree with the premise, and that he didn’t remember too much about the events, which happened a decade ago. The two exchanges stood out as rare moments when Wednesday’s hearing seemed to stick to the script.

There were a few testy moments, including when Rep. Jim Jordan (R-Ohio) was told to put on his mask when he took exception to Scanlon saying he was pushing “fringe conspiracy theories” on censorship. You can see the moment below, courtesy of CBS News:

Zuckerberg animatedly pushed back when House Judiciary Committee Chairman Jerry Nadler (D-NY) said Facebook violated antitrust laws when it acquired Instagram for $1 billion in 2012. The move was not illegal, Zuckerberg said, because Facebook and Instagram had a number of competitors at the time in terms of photo-sharing apps; he also pointed out the Federal Trade Commission understood this when it approved the deal. Zuckerberg acknowledged that the deal doesn’t look as fair now that Instagram has more than 1 billion users, but that the platform’s success wasn’t a guarantee at the time.

“I think with hindsight it looks probably obvious that Instagram would have reached the scale that it has today, but at the time it was far from obvious,” Zuckerberg said.

Nadler doubled down, saying Zuckerberg’s admission Instagram was a threat to Facebook’s business only shows it was a corrupt deal in the first place.

*Also Read:* 8 Burning Questions for TV's Summer Press Tour: Where Are the Execs? How Much Footage Will We See?

Despite concerns from many conservatives, Pichai said Google isn’t deliberately weeding out conservative outlets from its search results. Pichai added that Google is politically “neutral” and isn’t doing anything to unfairly push stories in favor of Democratic presidential candidate Joe Biden at the expense of President Trump. “We won’t do any work to politically tilt anything one way or another,” Pichai said. “It’s against our core values.”

His comments come after Breitbart.com editor-in-chief Alex Marlow told Fox News’ Tucker Carlson his website had seen its Google-referred traffic fall off a cliff since the 2016 election.

All four tech execs vowed to never use slave labor to create their products in response to a question from Rep. Ken Buck from Colorado. “I would love to engage on the legislation with you, congressman. Let me be clear: Forced labor is abhorrent, and we would not tolerate it in Apple,” Cook said.

The question wasn’t completely out of the blue; Sen. Josh Hawley (R-Missouri)’s office recently said a number of global companies, including Nike, have been tied to slave labor camps of the ethnic Uighur minority in China. Considering Apple’s close business ties to China, as well as Alphabet’s connections to the country, the collective response was good to hear.

Ultimately, Cook — the man running the world’s most valuable company — had a relatively quiet day. He did defend the App Store at a few different points, saying the company may charge a 30% commission on all App Store sales, but that it’s nowhere near a monopoly when it comes to the app market (or any other market).

*Also Read:* If TikTok Gets Banned in the US, These 4 Apps Could Benefit Most

One of the funnier moments — or bigger wastes of time, depending on your point of view — came when Rep. Greg Steube (R-Fla.) asked Pichai a simple question: Why are his campaign emails going directly to Gmail’s spam folder?

Steube worried his parents and followers were having a hard time getting his campaign emails — and wondered if it had anything to do with an anti-Republican bias at Google. Pichai said that certainly wasn’t the case, and that it merely boiled down to Gmail prioritizing emails from accounts it knew were connected to friends and family.

Rep. Steube complains to Google CEO about his campaign emails going to Gmail spam boxes and says that it's only happening to republicans. (No, pretty much every campaign deals with email delivery issues.) pic.twitter.com/XH1floO9ff

The exchange was a microcosm of the day. The hearing not only gravitated toward questions that weren’t germane to the topic at hand, it also failed to provided few worthwhile details on whether the four companies have participated in anti-competitive practices. Don’t expect much to come of Wednesday’s hearing.

Coronavirus: The Canceled and Postponed Events in Tech, Media, Sports and Entertainment (Updating)

These 3 moments from Big Tech's blockbuster antitrust hearing could come back to haunt the companies, according to Wall Street analysts

Jeff Bezos will be an open target when he's questioned by Congress for the first time. These are the big flash points to watch for. (AMZN)

Republican Congressman to Google, Amazon, Apple, and Facebook: So, what do you think of cancel culture?

Big Tech is in the hot seat in Washington. Here are the 16 most influential people shaping policy for the industry from the nation's capital.

· Big Tech is playing defense in the nation's capital as the Trump administration and Congress scrutinize the biggest companies on..

The wild life of billionaire Twitter CEO Jack Dorsey, who eats one meal a day, has faced attempted oustings, and is now cleaning up after a colossal hack that took over 130 high-profile Twitter accounts (TWTR)

· *Jack Dorsey **cofounded Twitter in 2006, and the company has made him a billionaire.*
· *He is famous for his unusual..