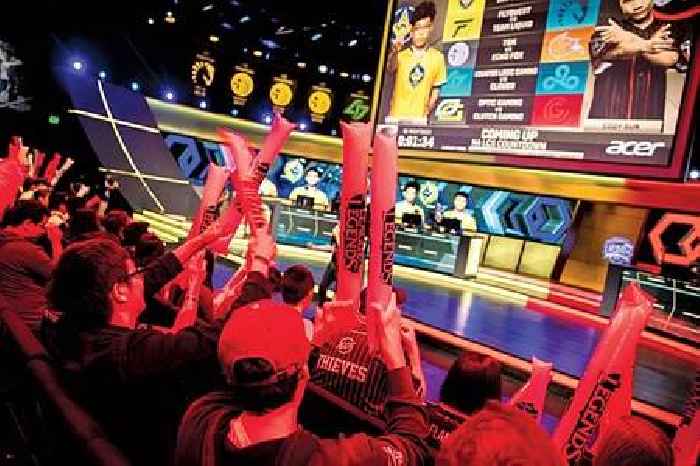 Riot Games’ multi-year deal with Spotify inked this week adds yet another exclusive podcast to the online platform’s lineup and gives Riot the chance to capitalize on audio content for the first time in its decade-long esports history.

The companies didn’t disclose terms of the deal, but a Riot spokesperson said the “multi-year” agreement includes Spotify helping Riot to produce several podcasts and curate playlists based on Riot’s games.

The first podcast under the deal will be a nine-episode series called “Untold Stories: Top Moments from Worlds,” which will recap highlights from past “League of Legends” World Championships and include interviews with past and current pro gamers.

Riot Games’ head of global esports partnerships Naz Aletaha said she pursued the deal with Spotify after noticing that the “League of Legends” game soundtrack attracted over 4.8 million listeners each month. Aletaha is betting that the audience will also delve into Riot’s vault of content, which is extensive — the first World Championship was held in 2011 and Riot’s documented every competitive moment since.

“We think there’s so much more we can offer our fans to give them more of a glimpse into the world of the game and the sport and creating a destination on Spotify will help us do that,” Aletaha told TheWrap.

“Untold Stories” podcast doesn’t have a determined launch date yet, she said, but it would make sense for Riot to time the show’s debut around the lead-up to the 2020 Worlds event — which will be held entirely online for the first year ever this Halloween.

“Spotify is coming in as the official audio streaming partner of ‘League of Legends’ esports, and they will be supporting the biggest esports events of our season, arguably some of the biggest events of the industry, and they’ll be helping to deepen fan engagement with the sport,” Aletaha said.

Although the video game developer could expand its podcast offerings to include other esports, like its growing “Valorant” competitions, Aletaha said that the company is focused on growing the “League” content for now.

Riot’s fictional K-Pop group K/DA is another brand that Spotify is eager to collaborate with — the group released a new single for the first time in two years yesterday on Spotify.

Spotify owns three networks, Parcast, The Ringer and Gimlet Media — the last of which it paid roughly $230 million for in February 2019 – and is actively recruiting for its roster of exclusive podcasts, which totals over 400 shows. It also operates its own production network, Spotify Studios, which is where the “League of Legends” content will be produced. The game already has a hub on the Spotify website and app aggregating all the “League” content, including soundtracks and podcasts by Riot Games and its broadcasters.

The audio streaming juggernaut is gobbling up shows at a rapid pace, but is losing one of its top creators soon. Joe Budden announced last week that he will pull his show “The Joe Budden Podcast with Rory and Mal” from the platform on Sept. 23.

Spotify said it offered Budden a better deal to keep his show on the slate, “one that was significantly larger and many times the value of the existing agreement and reflective of the current market and size of his audience,” according to a spokesperson. Budden said the contract wasn’t his sole motivation for leaving but that he felt Spotify didn’t properly compensate him and his co-hosts, Jamil “Mal” Clay and Rory Farrell.

The audio streaming subscription service also shelled out $100 million in May to buy Joe Rogan’s immensely popular interview show “The Joe Rogan Experience.” Rogan will begin exclusively broadcasting on Spotify by the end of this year.

Riot’s global head of marketing June Sauvaget said in a statement the goal of the partnership is to “create a first-of-its-kind audio universe for the millions of Spotify and League of Legends fans across the globe.”

“We plan to create a world-class audio-streaming experience for our users, making discovering both music and podcasts easier than ever before,” Sauvaget added.

While there’s already roughly 5 million people tuned into the “League of Legends” music on Spotify, there are even more fans to capitalize on if they can hook them with audio content. According to Statista, “League of Legends” was the second most popular game to view on Twitch so far in August, with 29 million hours watched — extremely close behind “Fall Guys,” a new jump-and-run battle royale game that came out Aug. 4 and fans watched 29.1 million hours this month.

Overall interest in watching “League of Legends” is still on the rise. Statista reports that roughly 75 million more fans are tuning into the game on Twitch now than in August of 2018.

“‘League of Legends’ events on the video streaming service Twitch were watched by an average of a record 183.92 (million) viewers (worldwide) in August 2020,” Statista sports and gaming analyst Christina Gough wrote in a recent report.

The “League of Legends” esport has teams across the globe and operates 10 leagues, including the LCS league in North America. Its Korean and Asian leagues have a particularly large following.

Both companies are eager to combine their multinational audiences. “Part of the reason why Spotify went to Nas and worked with this deal for more than a year was for the global aspect of it. Spotify is in 92 countries and that was part of the appeal that she felt from the first moment,” a person familiar with the deal said.

Aletaha corroborated that, saying, “what works so well is both companies are very global. I think (Spotify) sees the markets we’re strong in are also the markets they’re strong in, and so there was a lot of synergy.”

Tencent and its hyper-popular messaging app WeChat have become Trump's latest target. Here's how the company became a $69 billion behemoth that has a stake in everything from 'Fortnite' to Hollywood blockbusters. (TCEHY)

· An executive order issued Thursday night by President Donald Trump bars US companies and individuals from making any transaction..

Spotify is launching an official 'League of Legends' podcast