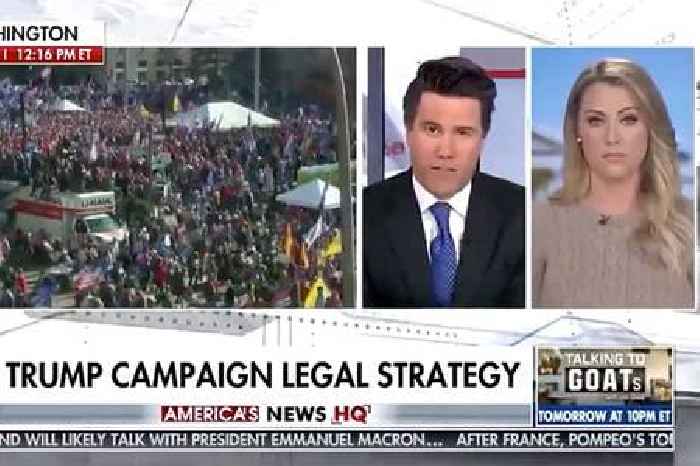 Fox News’ Leland Vittert and Trump 2020 press communications director Erin Perrine got into a heated, frequently inaudible shouting match over vote counting and accusations of fraud, with Vittert ending the interview with a frustrated, “OK, not much else to say.”

It’s difficult to hear everything being said over their interruptions and yelling, but Perrine did point out Vittert’s “smirks” and “eye rolls.” When both stopped shouting over one another, Vittert said, “I’m trying to ask you, very simply, where are you going to find the votes? You say you want to count every vote conceivably because you think you’re going to pull ahead. Where are the votes in a path to 270? Where?”

Perrine repeated her previous talking points, responding, “We are taking every legal avenue that exists in these states to make sure that legal votes are counted and illegal votes are counted… For every democrat and every talking head on the news, how much fraud is okay? How many dead people can vote and you’re ok with that?”

That’s when things heated up again, as Vittert was perturbed by Perrine’s use of “you guys” referencing the media.

“You guys? Who are you lumping everyone together with?” He asked, to which she mentioned the media. “The media in general? Now it’s just you attack everybody if they don’t agree with you. OK, not much else to say.”

President Donald Trump and his team have attacked the integrity of the U.S. voting and vote-counting system since Joe Biden was deemed the winner of the 2020 election.

CNN announced Friday that the final tally of electoral votes for the 2020 election is Biden: 306, Trump, 232, with Biden flipping five states that Trump won in 2016 (Pennsylvania, Michigan, Wisconsin, Georgia and Arizona.) President Trump and his allies touted the 306 figure heavily after his 2016 win.

Watch the video below.

Election Night 2020: Why COVID, Mail-in Voting… or Trump Might Delay the Results

The end is in sight for the 2020 election cycle, but don’t get too eager: Election Day 2020 may end before the question of..