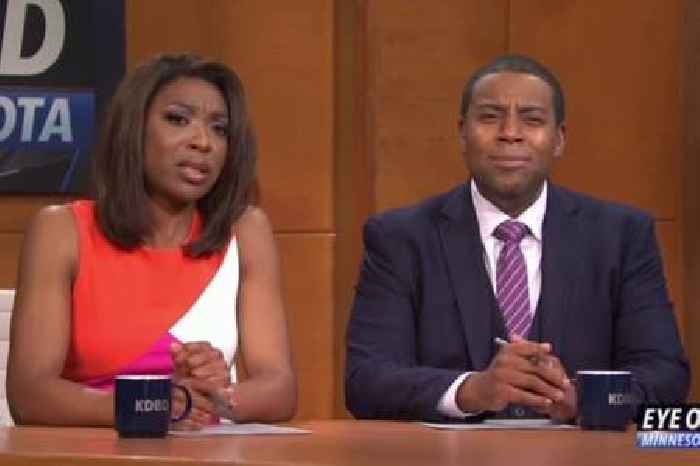 Rather than a direct parody of the week’s news, the cold open on the latest episode of “Saturday Night Live” satirized current events by parodying the gulf between the white and Black experience in America. In this case, as seen through a Minnesota TV news broadcast that had two Black anchors and two white anchors who couldn’t quite see eye to eye on issues of systemic racism in America.

The anchors — played by Ego Nwodim, Kenan Thompson, Kate Mckinnon and Alex Moffat, with Chris Redd playing the station’s weatherman — began by talking about the ongoing trial of Derek Chauvin, who was filmed murdering George Floyd in 2020.

The dynamic played out with the Black anchors essentially having a coldly realistic view of how the trial would play out — they assumed Chauvin will be acquitted — while the white anchors were far more optimistic. Meanwhile the weatherman wanted no part of the conversation (though he was positive Chauvin will skate as well).

“It’s been a tough week for news. there’s so much to get into, but first we start with the trial of Derek Chauvin,” Nwodim said at the start.

“Yes and I just want to say this has been highly emotional for everybody, I’m sure,” McKinnon said.

“Yeah, definitely. I mean watching this trial brought back so many bad feelings from last summer,” replied Nwodim.

“I know,” Thompson added. “I felt myself getting angry all over again.”

“Well I thought the prosecution did an excellent job questioning the medical examiner,” McKinnon said.

“But the video footage alone should tell you everything you need to know about what happened,” Moffat replied. “And hopefully justice will be served.”

“Sounds like we all agree there’s no way Derek Chauvin walks away from this,” McKinnon said.

“I ain’t gonna say all that,” Nwodim added. And thus the debate commenced.

“Of course not,” said Thompson.

“I mean the defense trying to make a case that George Floyd’s drug use was somehow responsible is just deplorable,” added Nwodim

“It was a clear act of desperation to create doubt where there is none,” Thompson said.

“Exactly, and there’s no way the jury’s gonna fall for that,” McKinnon said.

“I don’t know about that,” said Nwodim.

“I’m not saying that,” Thompson agreed.

“Wait, so what are you guys trying to say?” McKinnon said.

Next they discussed the deaths of Prince Philip and legendary rapper DMX on the same day — and of course had some disconnect over which death was more significant.

Finally, they brought up the ongoing scandal involving Florida congressman Matt Gaetz, and while the anchors all agreed lockstep that Gaetz appears to be pretty gross, the weatherman defended him, arguing that “17 isn’t that young.” (Gaetz, who denies any wrongdoing, is being investigated for several possible crimes including sex trafficking of a 17-year-old.)

Watch the full clip above.

“SNL” is now nearing the end of its 46th season. The most recent new episode, which aired on April 10, was hosted by “A..