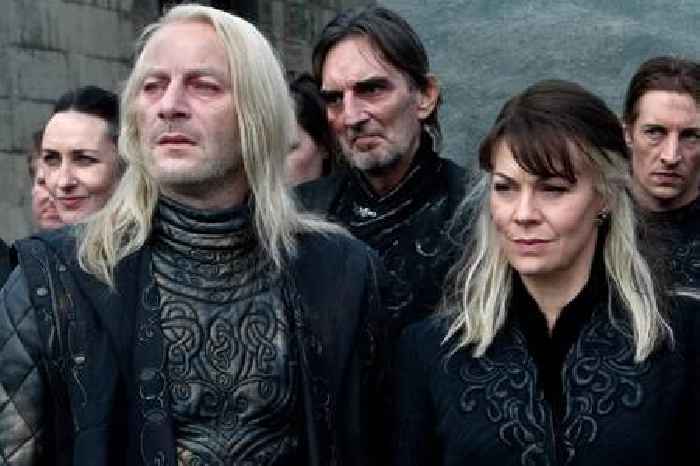 “Harry Potter” alum Jason Isaacs remembers his “Harry Potter” leading lady, the late Helen McCrory, as “scabrously funny, shockingly naughty and with an empathetic heart the size of a planet.”

There have been many actors who have shared the screen with McCrory, but arguably her most famous pairing was with Isaacs, who, along with Tom Felton, played the infamous Malfoy family. Sunday, Isaacs paid tribute to McCrory, calling her “the greatest actress I’ve ever seen.”

“Decades ago Helen and I auditioned together for a film,” Isaacs wrote in a Twitter post. “I came home and said to Emma [Hewitt, his wife], ‘I think I’ve just met the greatest actress I’ve ever seen.’ After years of watching her mesmerize audiences I don’t think that anymore… I know it.”

“Luckily, I eventually found out that she was also scabrously funny, shockingly naughty and with an empathetic heart the size of a planet,” he continued. “As continually starstruck as I was on the ‘Harry Potter’ films, being screen-married to and giggle with the great Helen McCrory will always be a highlight.”

Hold those you love and tell them every day. It’s all we have. https://t.co/mwsBQwpePi pic.twitter.com/gjEf0YkKhC

As Narcissa and Lucius Malfoy, McCrory and Isaacs played the parents of Harry Potter’s bitter rival, Draco. For years, the Malfoys were servants of the series’ villain, Lord Voldemort, but fled into hiding when he was seemingly killed on the night he attempted to murder Harry as an infant. To punish the Malfoys for not showing enough loyalty to him, Voldemort ordered Draco to kill Hogwarts headmaster Albus Dumbledore, leading to McCrory’s most famous scene in the “Potter” series where she asks Severus Snape, played by the late Alan Rickman, to kill Dumbledore if Draco is unable to do it.

Watch the scene below.

McCrory died at the age of 52 on Friday after a battle with cancer. In addition to her work in the final three “Potter” films, McCrory also starred in the hit period drama “Peaky Blinders” alongside Cillian Murphy, as well as in the Best Picture-nominated Martin Scorsese film “Hugo” and the James Bond film “Skyfall.” She was married to fellow actor and “Homeland” alum Damian Lewis, with whom she had two children.

“Her proudest achievement… was building and loving the family that was her bedrock,” Isaacs wrote/ “They’ve lost so much and I send all my love to Damian and the kids.”

Helen McCrory Remembered as 'Force of Nature,' 'Goddess' and 'a Genuine Firecracker'

The two actors, who play the son and father duo in the wizarding movie franchise, add tribute to their late co-star after she lost..