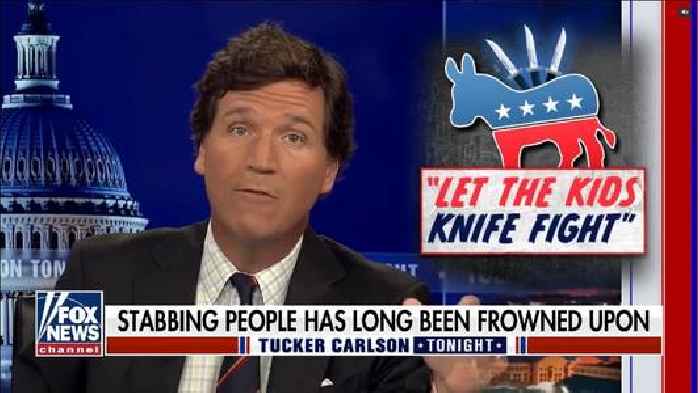 The essence of satire is that it actually reflect at least a kernel of truth, which doesn’t explain why conservative pundits like Tucker Carlson are so very often not actually good at it, but at least explains the specific way they aren’t.

Case in point, a sarcastic rant Tucker delivered at the top of his most recent episode, in which he used the shooting of Ohio teenager Ma’Khia Bryant as the jumping off point for a weird joke about how the Democratic Party wants kids to murder each other with knives. And no, typing it out doesn’t make it make sense.

Bryant, a 16-year old Black Columbus girl living in a foster home, was shot and killed by police on Tuesday after police responded to a 911 call about a knife attack. The details of the case are not fully understood, and there have been conflicting reports about who made the call and why. But body cam footage shows Bryant holding a knife and lunging at another girl just before police shot her. Whatever the situation proves to have been, it’s generally agreed that the whole thing is tragedy that ended with the death of a 16-year-old.

Tucker however decided this was a good time to test out some jokes.

“Good News: After a decades-long search by a blue-ribbon commission of internationally renowned experts from McKinsey & Company and Yale Law School, the Democratic Party announced that it has finally identified the single most grotesque, most dystopian, most anti-human policy ever adopted by a Western government. They’ve been looking hard to find it, as you may have noticed,” Tucker began.

“At a triumphant press conference Wednesday, leading Democrats unveiled their findings, which are now a plank in the party’s platform: They’re going to allow children to stab each other,” Tucker continued. Obviously, this press conference didn’t actually happen. It was just part of the joke.

Tucker continued by saying that “stabbing people has long been taboo in this country, especially for those under 18,” but now, thanks to his fictional version of the Democratic Party, “Knife fights are human rights. Stabbing can finally come out of the closet.”

To be clear, we aren’t sure what this is supposed to be parodying. No one has expressed outrage about Bryant’s death with the argument that stabbing people is good. But anyway, Tucker then made a reference to Mesoamerican history that really didn’t make any sense in or out of context, then said that this new stabbing thing he attempted to wring laughs out of will be a fundamental right alongside “the right to commit voter fraud, the right to free body piercings, the right of trans illegal aliens with pituitary disorders to become fighter pilots.”

Tucker continued along these lines for a couple more minutes before finally putting all of this in a kind of context. Describing the shooting of Bryant with a ton of sarcasm, Tucker derided people who have criticized police for shooting her, using as an example a woman named Kiara Yakita of the Black Liberation Movement of Central Ohio, who said to the Washington Post: “As soon as the officer got out of the car, he had the gun ready to shoot somebody. Law enforcement and city officials are rushing to make excuses because she had a knife. Those excuses are not valid to me.”

Tucker of course didn’t much care for that and to make his displeasure known, he referenced Bruce Lee’s 1971 film “The Big Boss,” in order to make the case that police officers are not generally known as elite martial arts experts.

“Someday soon, Merrick Garland’s Justice department will likely send down a consent decree mandating just that, we have no doubt,” Tucker continued as he brought the gag to a close. “In the meantime, MSNBC pointed out, we know for a fact that the cop was a racist, because he didn’t even bother to ask Ma’Khia Bryant what her grade point average was, or whether she had a popular TikTok account, if you can even imagine.”

Suffice to say, the whole thing functions more like a grab bag of things conservatives like Carlson enjoy complaining about, regardless of whether they’re true or not, rather than a clear joke. Then again, in 2020 Fox News argued in court that Tucker Carlson should not to be treated like a credible news person, and a judge agreed. And since topical comedy is very much based in news, that might explain it.