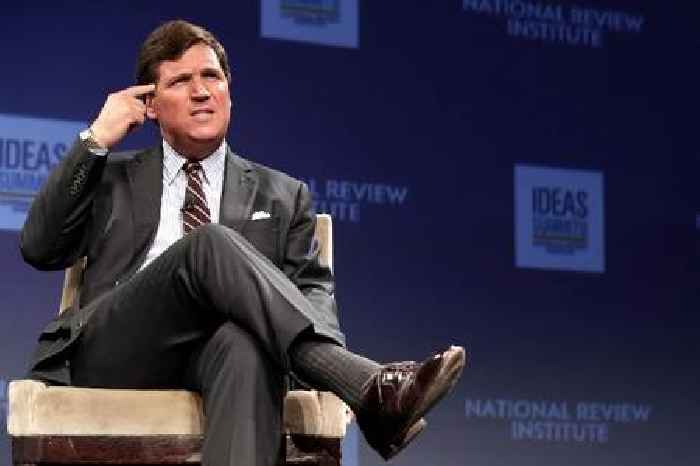 Apparently, Tucker Carlson thinks parents should be arrested for child abuse if they make their kids wear a mask to prevent the spread of COVID-19.

That uh, observation came during Tucker’s latest monologue at the top of Fox News’ “Tucker Carlson Tonight” Monday. It began with him railing against politicians requiring their constituents to wear masks — which, Tucker argued, “99% of us would have survived anyway.” (Cold comfort for the 570,000 people who didn’t, of course.)

Tucker then zeroed in on kids by ranting against parents who make their children wear masks. The Centers for Disease Control and Prevention recommends all children age 2 and over wear masks to prevent the spread of COVID and recently said that kids still should wear masks in public spaces, especially if they attend summer camps this year.

*Also Read:*
Tucker Carlson Tries to Joke That Democrats Want Kids to Stab Each Other (Video)

“As for forcing children to wear masks outside, that should be illegal,” Tucker said. “Your response when you see children wearing masks while they play should be no different to seeing someone beat a kid in Walmart. Call the police. Contact Child Protective Services. Keep calling until someone arrives.”

While kids are less likely to get and spread the coronavirus than adults, over 3.6 million of them have tested positive for it since the pandemic began — at least 297 of those cases were fatal. According to Johns Hopkins, over 572,000 Americans have died from the virus since its outbreak.

What you’re looking at is abuse, it’s child abuse and you are morally obligated to attempt to prevent it,” Tucker said about kids in masks. “If it’s your own children being abused, then act accordingly.”

The Reason? “People need fresh air, especially children. Deprive them of fresh air and you hurt them,” Tucker said.

“Let’s say your kid’s school emailed you to announce that every day after lunch, your sixth-grader was going to get punched in the face by a teacher. How would you respond to that? That’s precisely how you should respond when they tell you that your kids have to wear masks on the soccer field,” Tucker said. “That is unacceptable, it is dangerous, and we should act like it, because it is.”

Tucker also said during Monday’s Fox show that masks are signs of “shame and submission,” and said it used to be that “only Klansmen and robbers wore masks.” He also advocated that adults confront each other outside if someone is wearing a mask in open air. “The next time you see someone in a mask on the sidewalk or on the bike path, do not hesitate. Ask politely but firmly, ‘would you please take off your mask; science shows there is no reason for you to be wearing it? Your mask is making me uncomfortable.”

It isn’t clear if Tucker was aware that there have been multiple acts of violence committed against people wearing masks since the start of the COVID-19 pandemic when he encouraged his viewers to harass strangers.

Tucker also compared masks to “Kim Il-sung pins in Pyongyang — we wear them because we have to. The only people who wear masks voluntarily outside are zealots and neurotics.” Tucker took the analogy one step further, saying that “wearing a mask outside is like watching a grown man expose himself in public — it’s grotesque, put it away.”

It’s worth remembering that last year a court declared Tucker wasn’t a credible source of news, and that any reasonable person watching his show should approach it with a heaping helping of skepticism.

Check out Tucker’s full remarks at the top of the page, and some reactions to his comments below.

Earlier today, "straight news" Bret Baier read a Fox poll that said Americans don't want to get the vaccine because they think the process was rushed

Baier failed to mention the passionate (and unhinged?) anti-science tirades his colleague gives viewers on a near nightly basis https://t.co/bTzCcyFKLR

This is unbelievably dangerous, just an insane level of stakes-raising. https://t.co/ysR1bxFkpR

This is really, really dangerous. Listen to his tone of voice, and what he’s instructing. He’s moving from his viewers passively consuming his propaganda to having them act on it — against their neighbors. He’s testing his audience’s compliance. https://t.co/ZxqFMsboAW

This is very dangerous — Tucker Carlson is encouraging his viewers to confront and harass people wearing masks and to report it as child abuse if a child is wearing one.

I have had it! We have got to bring down Fox ! https://t.co/nCqErvi7xg

Just know this: Tucker is EXACTLY where the GOP base is at. Exactly. It’s sad, but true.

Tucker Carlson: Jurors Only Convicted Chauvin Because They Were Scared (Video)

Actor Jim Caviezel, who used to be famous for starring in movies like “The Count of Monte Cristo” and “The Passion of the..