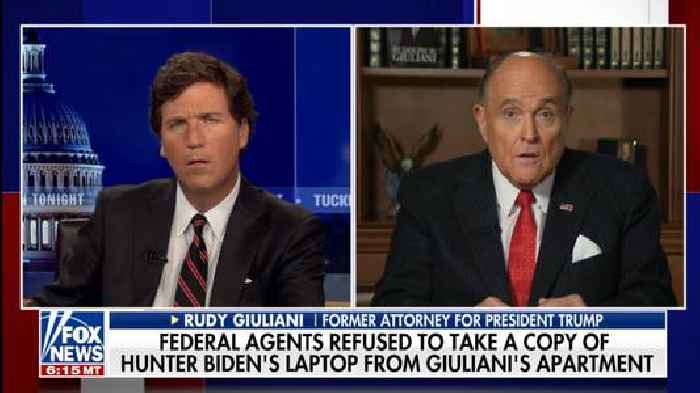 Rudy Giuliani made an appearance on Tucker Carlson’s Fox News program this evening, his first interview since the FBI raided his law office and home in New York City on April 28.

The former New York City Mayor and attorney for former president Donald Trump bragged on live national television Thursday evening that he could have destroyed evidence in the ongoing cases against him and Trump “years ago,” but chose not to. Giuliani also claimed that the FBI declined to take several hard drives from his home that contained copies of Hunter Biden’s laptop.

“The only time they got perturbed is at the end of the search, when they’d taken seven or eight electronic items of mine — which is what they took, and two of someone else’s — they weren’t taking the three hard drives, which of course are electronic devices, they just mimicked the computer,” Giuliani said.

Giuliani continued, “I said, ‘Don’t you want these?’ And they said, ‘What are they?’ And I said, ‘Those are Hunter Biden’s hard drives.’ And they said ‘No, no no.'”

Giuliani said he badgered the FBI asking them repeatedly regarding the Biden files, but the FBI refused to take them. “The warrant required them to take it,” Giuliani argued.

Then Giuliani turned down an interesting road and began questioning, on live TV, why the FBI was so trusting of him during the search. Odd thing for someone who’s just been raided by the Justice Department to say, but Giuliani careened on, full speed ahead.

Then Giuliani bragged, “I could have destroyed the evidence years ago. I didn’t destroy the evidence because the evidence is exculpatory. It proves that the the president and I are innocent.”

The U.S. Attorney’s office is investigating Giuliani for foreign lobbying — in particular, it’s alleged Giuliani asked Ukrainian government officials to dig up dirt on Joe Biden on behalf of then-president Trump, who was seeking to beat Biden in the 2020 election.

Michael Cohen, former personal attorney to Trump, said in an interview today that he thinks Giuliani is an “idiot” who drinks too much, acts erratically and wouldn’t hesitate to flip on the former president to save his own skin.

“There is no relationship, nor has there ever been, between Rudy and Donald,” Cohen said, adding that before Trump became president, the two didn’t even like each other. “Do I think Rudy will give up Donald in a heartbeat? Cohen asked. “Absolutely.”

Tucker Carlson, who was mostly mute during the interview, did harp on the fact that the FBI chose not to take the alleged Hunter Biden hard drives, as if to imply there’s some grand conspiracy going on between the Biden administration — which Giuliani called the “Biden crime family” — and the Justice Department. There’s no evidence of that, and Giuliani was being investigated before Biden even took office.

Also, it’s always worth remembering that Tucker was determined to not be a credible source of news by a judge, who ruled last year that any “reasonable viewer” should be able to discern that Fox’s “Tucker Carlson Tonight” was not a source of “actual facts” but instead “non-literal commentary” made for entertainment.

Watch Tucker’s full interview with Giuliani at the top of the page.