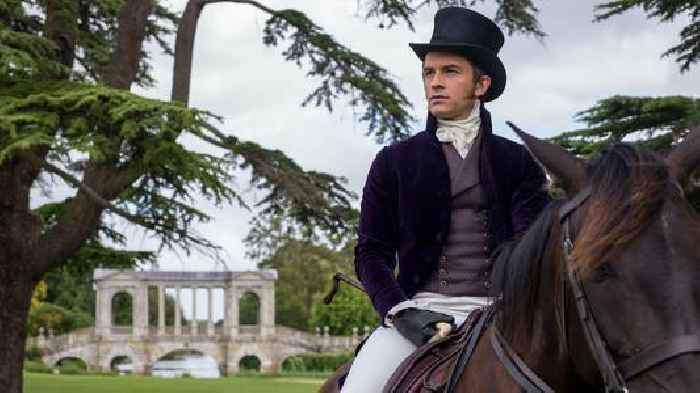 As every “Bridgerton” fan knows — whether they liked it at first or not — the show’s focus is shifting from Daphne (Phoebe Dynevor) and Simon (Regé-Jean Page) to a new leading couple: Daphne’s eldest brother, Anthony Bridgerton (played by Jonathan Bailey), and his love interest, Kate Sharma (“Sex Education” alum Simone Ashley).

And now we finally have our first look at the new romantic pairing in costume, thanks to some pictures snapped on the set of the Shonda Rhimes-produced Netflix series’ second season, which recently began production.

In the on-set photo, which you can view here, Bailey and Ashley are in full Regency-era costume as their “Bridgerton” counterparts. From the looks of things, in this scene, Anthony and Kate are attending a horse race along with some other “Bridgerton” characters, including Anthony’s brothers Colin (Luke Newton) and Benedict (Luke Thompson), his sister Eloise (Claudia Jessie), his mother, Lady Violet Bridgerton (Ruth Gemmell), and Lady Danbury (Adjoa Andoh).

When Netflix renewed its smash hit “Bridgerton,” it revealed the second season would revolve around Anthony, just as each of Julia Quinn’s “Bridgerton” novels shifted to focus on the love life of a different Bridgerton sibling. And it was recently confirmed just how heavily the show would shift focus, as Page will not be appearing in Season 2 at all. Dynevor, however, will reprise her role as Daphne and remain part of the ensemble cast, while her husband and their new baby will not be seen on screen. (And the door is still open for him to return in future seasons.)

Not long after Page’s exit was announced — which came just before production began on the second season — Netflix revealed it had gone ahead and renewed “Bridgerton” for Seasons 3 and 4, too.

So if “Bridgerton” gets an eight-season run, the likely scenario is it would move on to cover the love lives of the four youngest Bridgerton siblings in order: Eloise (Claudia Jessie), Francesca (Ruby Stokes), Gregory (Will Tilston) and Hyacinth (Florence Hunt).

Filming of season two of Bridgerton is underway which means we have our first look at the family in the season of 1814 (minus..