WrapPRO Roundtable: Will the Sports Rights Bubble Ever Burst? | Video 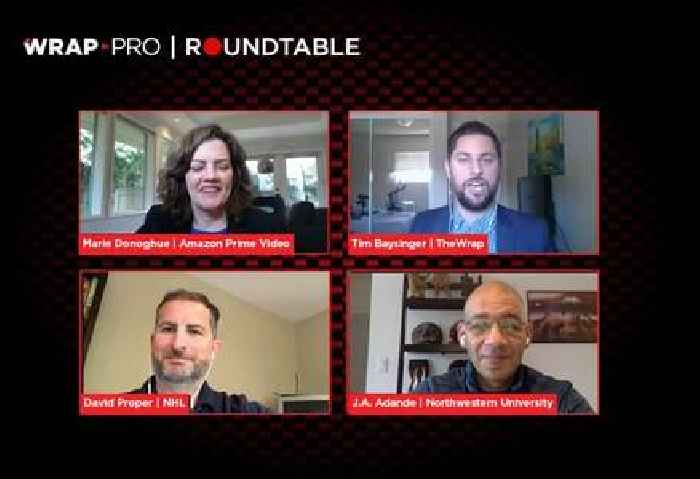 WrapPRO Roundtable: Will the Sports Rights Bubble Ever Burst? | Video

As the legacy media bundle continues its descent, live sports has never been more important in keeping that model afloat. But as Bob Dylan once said, the times they are a-changing.

The NFL’s 11-year rights deal gives current partners like Disney and NBCUniversal the ability to offer their games on in-house streaming services, ESPN+ and Peacock. Additionally, the league expanded its relationship with Amazon by turning over “Thursday Night Football” to the retail giant, starting with the 2022 season. The role of streaming in the world of sports rights was the focus of the latest WrapPRO Roundtable, moderated by TheWrap’s Tim Baysinger.

The NHL, meanwhile, is trading NBC Sports for two partners in Disney and Turner. The NHL’s Disney deal makes the majority of games available on ESPN+ and Hulu, while saving major events like the Stanley Cup Finals for broadcast. With Turner, hockey games will eventually have the chance to be streamed on HBO Max.

In the last few months, sports rights deals are taking on a streaming slant, but can live sports work in an environment that caters to on-demand viewing?

“Sports are the most effective ways to get people to watch television in real time. That’s of greater value to the networks than it is to a streaming company, who is accustomed to serving customers when the customers want it, literally, on demand,” J.A. Adande, Associate Professor and Director of Sports Journalism at Northwestern University, told TheWrap. “And so I just wonder if it’s not that essential for the streaming companies as it is for the broadcast and cable companies — who are desperately trying to hang on to viewership — if the increases in the rights fees can be sustained. If the streaming services aren’t bidding, if the revenues for the broadcast and the cable companies are going down, what will support increased rights fees that have been driving the run up in professional sports for the last half century?”

For her part, Marie Donoghue, vice president of Global Sports Video at Amazon, said sports remain a robust proposition, citing Amazon’s deals for “Thursday Night Football,” local rights for the Seattle Sounders of the MLS and New York Yankees, as well as a slew of international rights for soccer’s Premier League, Champions League and tennis’ U.S. and French Opens.

“I don’t think it’s a dire future for sports at all. I think it’s a great opportunity to innovate: start with the customer, start with fans and innovate,” she said. “We wouldn’t be investing in 11 years with the NFL exclusively if we didn’t believe in sports.”

“We’ve been in business with the NFL for a few years. So we know a lot about what works and what customers really like,” she said. “The game is paramount. We’ll focus on improving the fan experience, but it’s intuitive. It’s not distracting. You’re not going to see, you know, when someone’s in the Red Zone, you’re not going to see beeps and buzzes going off to get you to try to go do something else.”

The NFL’s new $110 billion deal, which begins with the 2023 season, is more than three times the price of its current deal while the NHL also got three times as much (around $625 million a year between Disney and Turner) as it was getting from NBC, ($200 million), by splitting its rights in two. The NHL’s deal is straddling two worlds: It keeps it in the business of broadcast and cable TV, while hedging its bets with streaming.

“Trying to predict what the future will hold, that’s a dangerous game to play in this space. I mean, five years ago, I don’t think people would have said streaming would be where it is now,” David Proper, the NHL’s senior executive vice president of media and international, said.

Part of the reason that streaming is more of a factor in these new rights deals is that they’re from the same companies that have long been in the business of sports. Are Disney and NBCU, for example, trying to push their own sports fans onto their streaming services at the expense of TV?

“It’s a strange model,” Proper said, noting that the streaming world is just as expensive, if not more, than the old cable bundle. “You have the people who, five years ago, three years ago, were saying the bundle is a disaster, because everybody has to pay for things they don’t want.”

Proper added: “I’m spending more on my cable than I ever did before. Somewhere, this has to measure itself out it has to come to some kind of a balance.”

For more of this conversation please watch the video above.