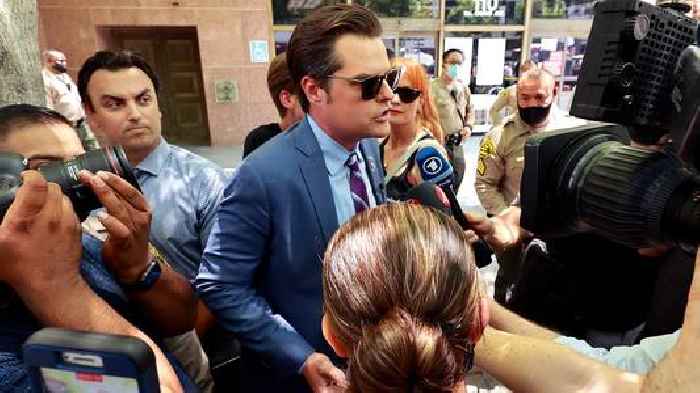 Embattled U.S. Representative Matt Gaetz just called Britney Spears’ father, Jamie Spears, a “d—” as he spoke outside of the Los Angeles courthouse where her conservatorship hearing is taking place.

“There’s a lot that still divides us but one thing we call all agree on is that Jamie Spears is a d—,” Gaetz said in front of other fans who had gathered in front of the courthouse. “He should not be making any more decisions regarding his daughter, she is nearly 40 years old she should make her own decisions. This case should open our eyes to the broader abuse that occurs in this system to the millions of Americans impacted… Britney has a chance because we all love her and we care about her.”

He continued, “the whole world knows what Britney Spears wants, and it is the freedom and the liberty that should be offered to every single American. Free Britney!” Gaetz also called for a federal cause of action, a federal change in the law that will free Spears “and the millions of Americans who are impacted by a corrupt guardianship system that empowers people to take advantage of the weak. That’s what we stand for, and that should unite all Americans.”

The investigation into Gaetz, who denies any wrongdoing, is part of a larger investigation into one of his political allies, a former Florida county tax collector named Joel Greenberg, who was indicted last summer on multiple federal charges, including for the sex trafficking of a minor. Greenberg has pleaded not guilty.

Since the investigation first became public in late March, the weird and amusing details have piled up. Including the fact that according to The Daily Beast, Gaetz and Greenberg conducted some very shady transactions using Venmo — with their settings set to public. And  CNN reported that two women say Gaetz and other Republicans attended multiple parties filled with sex and drugs.

Gaetz has resisted efforts to persuade him to resign and in recent months has attempted to turn himself into a culture war star, teaming up with fringe right wing congresswoman Marjorie Taylor Greene for a series of political rallies — including an event in May that ended up being canceled after the owners of the venue realized the pair were involved.Spears is expected to ask the court to appoint her own lawyer on Wednesday following the resignation of her court-appointed attorney Samuel D. Ingham III.

Spears’ conservatorship dates back to 2008, around the time of her very public mental health struggles. After losing custody of her two children to former husband Kevin Federline and then refusing to turn over her boys after a visit, Spears was hospitalized and placed on a 5150 psychiatric hold, beginning the conservatorship under her father, Jamie Spears.

Last month, she spoke out publicly for the first time about the conservatorship at a hearing in the Los Angeles probate court.

“I just want my life back,” Spears said at the hearing. “And it’s been 13 years. And it’s enough. It’s been a long time since I’ve owned my money. And it’s my wish and my dream for all of this to end without being tested.”

“Britney Spears has been abused by the media, a grifter father, and the American justice system.

We need to come together and create a federal cause of action.”#FreeBritney pic.twitter.com/eqMGN6ZGMR

The hosts of “The View” are all Team Britney when it comes to Britney Spears’ conservatorship battle, but they don’t think..